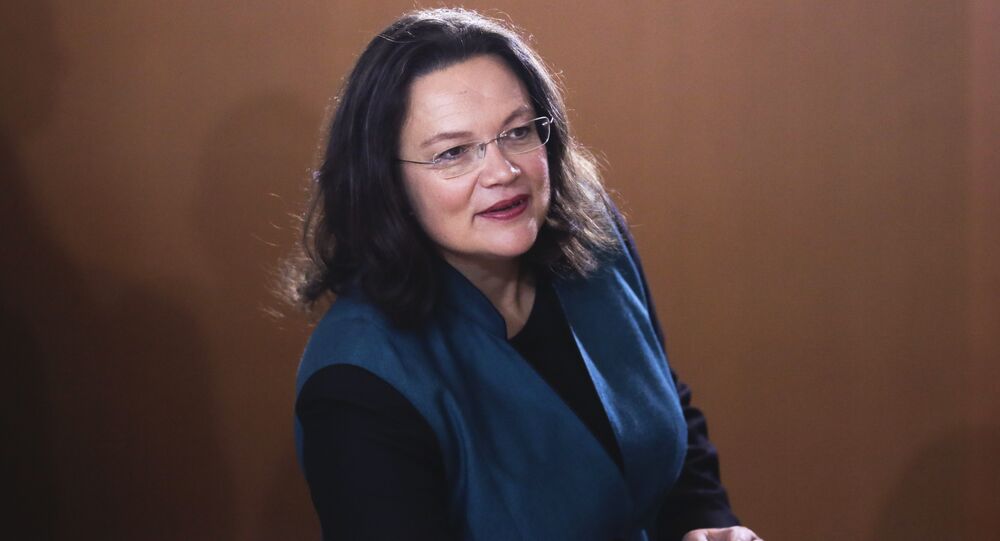 BRUSSELS (Sputnik) Luc Rivet - Andrea Nahles announced Sunday her resignation from the post of the president of the Social Democratic Party (SPD), a week after the stinging setback of the European election for her party, to further destabilize Chancellor Angela Merkel's ruling grand coalition.

Nahles' resignation came as no surprise since she crystallised criticism after her party's defeat in the elections to the European Parliament on 26 May. Largely outnumbered by The Greens, who had won more than 20 percent of the vote, the center-left traditional SPD only won 15.5 percent — the party's worst result ever.

"The discussions within the parliamentary group and the many reactions of the party showed me that I no longer have the support necessary for the exercise of my functions," the now-former SPD leader admitted in a statement.

Two days before an internal vote that sealed her fate, Nahles, the first woman to lead the SPD, threw in the towel and renounced her seat in the country's parliament as well.

What Comes Next for Grand Coalition and Merkel?

The grand coalition, formed in pain in early 2018, sailed from crisis to crisis, and now stumbles earlier than expected with Nahles' resignation. The Social Democrats, the "junior" partner of the coalition, had planned to settle the issue of the party's participation in the coalition in September, mid-term and around regional elections in three German federal states.

© Photo : Youtube/EnjoyFirefighting
Police Launch Probe as Member of Merkel's Party Found Dead With Head Wound
But the Christian Democratic Union (CDU), one of the members of the grand coalition, which also includes the SPD and the Christian Social Union in Bavaria (CSU), now fears an acceleration, by domino effect, of the decomposition of the government, since Nahles was brought down by angry party members who wanted out of the coalition with Merkel.

Merkel looks gloomy any day of the week, but her short appearance on television on Sunday was remarkably dark because she had to comment the event but obviously hated doing so. In a brief speech on the sidelines of a party meeting, the chancellor said she was determined to continue the work of her government.

"What I want to say on behalf of the government is that we will continue our work with all our seriousness and especially our sense of responsibility," Merkel insisted.

A message identical to that of her runner-up and leader of the CDU, Annegret Kramp-Karrenbauer, who hammered the same terms a few minutes before her.

"I expect the SPD will make the now necessary personnel decisions quickly, so as not to impair the ability of the grand coalition to act. We remain committed to the Grand Coalition," Kramp-Karrenbauer said.

Merkel and the CDU, which she led for nearly two decades until last December, are now trying to keep the SPD in the grand coalition.

© AP Photo / Andreas Gebert
Joke by Merkel's Successor About Gender-Neutral Bathrooms Rattles German Public
On the side of the SPD, politicians are more and more seriously talking of leaving the alliance formed with the CDU, at the risk of provoking early elections and a premature departure of the chancellor, whose mandate ends in 2021.

On May 27, Kevin Kuenhert, leader of the SPD's youth, and two other figures on the left wing of the movement took the pen to demand that the party imposes a left turn of the coalition, or threaten that the SPD would slam the door of the government if necessary before the end of the legislature.

"We did not take a subscription with the right to govern together," they wrote in their appeal.

Michel Liegeois, a political sciences professor at the Catholic University of Louvain in Brussels and specialist of political crises in Europe said, commenting on the situation in Germany, that the SPD was not the only one going through a crisis.

"It is also for the coming months about the future of Angela Merkel; the two parties structuring the German political landscape, SPD and CDU, seem to jump hand in hand into the unknown. Because the future is not clearer on the side of the conservative party of Angela Merkel," Liegeois said.

© AP Photo / Joerg Sarbach
Germany's SPD Ready to Allow Some Arms Exports to Saudi Arabia - Reports
What made Merkel's success was continuity and sound measured economic leadership by the Minister of Finance Wolfgang Schauble, but he is gone, and Merkel is now terribly lonely at the helm, with plenty of so-called friends in the CDU who want her demise, and the country struggling to deal with the results of her immigration policy.

According to the professor, neither the SPD's nor the CDU/CSU union's stances on climate resonated with voters, which partially explains the Greens' good results in the European elections.

"They feel the attacks of the hard left… but above all of the younger Green party that reached 20 percent in the European election last week. The SPD would like to rejuvenate their program by veering resolutely to the left, which they cannot in the present coalition," Liegeois added.

The CDU leader has also been struggling since the elections. Although coming in first, the CDU has achieved a historically low score. Kramp-Karrenbauer has also multiplied minor missteps and is today strongly contested internally, only one year after succeeding Merkel at the head of the party.

In the face of the CDU and the SPD, which have been deepening their differences for months on strategic issues, the Greens are doing well and are continuing their ascent. Last Saturday, they passed for the first time at the head of voting intentions at the national level with 27 percent, before the CDU, who has 26 of potential votes, far ahead of the SPD with 12 percent.

Who Will Replace Nahles?

To add to the scale of the crisis, no successor is designated to replace Nahles at the head of the SPD. Nahles announced her resignation, saying she wanted to give the party the chance to elect the next leader in an orderly way, but the reactions do not seem orderly at all.

Some names circulate, like that of Martin Schulz — the former president of the European Parliament — but Schulz has every characteristic of a "has been," since he was marginalized after losing to Merkel in the last legislative elections.

Vice-chancellor Olaf Scholz, who is the most senior SPD politician after Nahles, and other party heavyweights already ruled out another grand coalition with the CDU, at least after the next federal election.

"Three grand coalitions in a row would not do democracy in Germany any good. No one wants a continuation of the current coalition after 2021 — not the citizens, not the CDU and certainly not us Social Democrats," Scholz told Der Tagesspiegel newspaper on June 1.

Ralf Stegner, Nahles's deputy at the SPD, in turn, has asked the party to calm down, adding that it needed "re-establish its values of solidarity" and carry out a "fundamental reshuffle" to deal with the crisis.

The leader of the party's youth, who did not want to share power with Merkel anymore, fearing the collapse of the SPD, is on the ranks for replacing Nahles at the head of the German socialist party as well.

Other Reactions in Germany

The Alternative for Germany (AfD) anti-immigration party, which won seats in parliament for the first time in 2017 after Merkel's popularity had been undermined by her decision to allow 1.5 million migrants into the country during the migration crisis of 2015, has called for the dissolution of the government and the chancellor's resignation.

The Liberals of the Free Democratic Party (FDP), which is pro-European but has been heavily critical of Merkel's migration policy as well, have not taken a position yet, but are set to convene on Monday to address the situation.

FDP General Secretary Linda Teuteberg told Sputnik that the party did not want to make any populist demand without real impact.

"Politicians should think first, before acting… We have a government now that at least wobbles on one leg, not to say worse! It is important now to create the stable conditions, needed for action in Germany but also and especially at European level. All parties must do their part: the SPD, by clarifying its own leadership issue, but also all other parties, by showing responsibility at the highest level. It is not the time right now… to put forward any partisan considerations and make demands or exclusions," Teuteberg said.

© AP Photo / Michael Probst
Merkel’s Party Clashes With YouTuber After He Rips Their Policies
The Green and The Left have not reacted yet and want to define their position before any declaration to the media. But The Left was clear in February, when it accused the SPD of losing its soul.

According to Bernd Riexinger, The Left chairman, the hour of truth has come for the SPD.

"Nahles wanted to implement parts of the new SPD welfare state concept in this government. The Coalition Committee showed how it was not taken seriously. This government is declaring that every step towards a decent social policy must follow decisions dictated by the market economy," Riexinger said.

According to the chairman, the SPD can either leave the grand coalition, or risk collapsing or being diminished because of its relationship with the CDU.