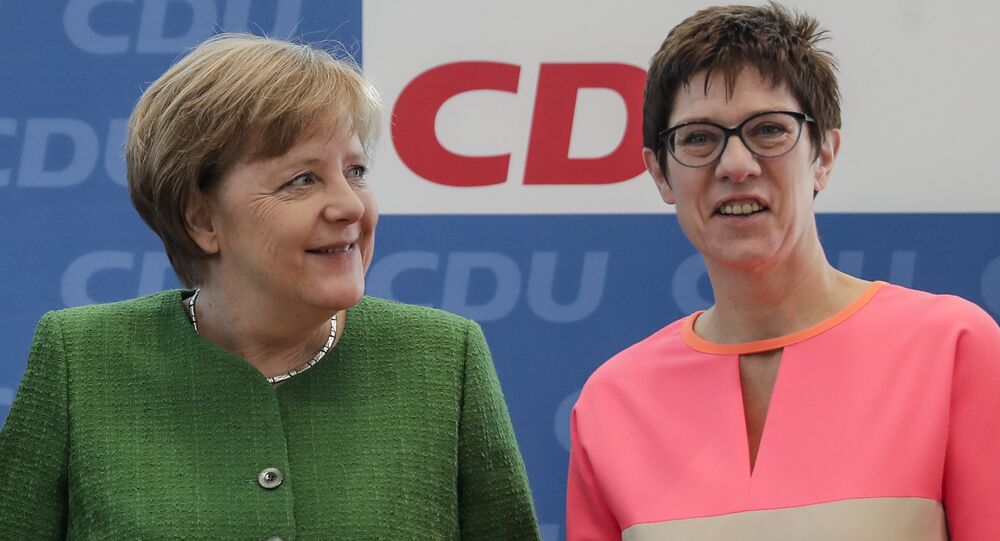 MOSCOW (Sputnik) - The head of the German Christian Democratic Union (CDU), Annegret Kramp-Karrenbauer, who replaced Chancellor Angela Merkel in this post, said in an interview that she did not plan to become the country's Chancellor before the official expiration of Merkel’s term in 2021.

"The Chancellor and the government were elected for the entire term of office, and citizens rightly expect them to be serious about the obligations arising from these elections. Therefore, I can rule out any efforts for meaningless changes", Kramp-Karrenbauer told the Welt am Sonntag newspaper.

Back in December, Kramp-Karrenbauer was elected CDU head at the party congress in Hamburg amid reportedly collapsed ratings of the main German political CDU/CSU alliance over the controversial country's migration policies.

Among the key promises of Kramp-Karrenbauer was an overhaul of the country's migration policy. Earlier public opinion surveys showed that the majority of German citizens have suggested the country's policy in this particular sphere was too careless.

© AP Photo / Christian Essler, XCITEPRESS
'Passport Lost' and 'I'm a Daesh Terrorist': Tricks Migrants Use to Avoid Deportation From Germany
Back in July, CDU and the CSU agreed to take measures to curb undocumented migrant flows into Germany. The deal reportedly included, among other things, boosting control along the border to prevent irregular migrants from entering the country, as well as the creation of transit centres in Germany, where migrants will stay up to two days before deportation to other EU countries where they were originally registered.

Merkel has been criticized for her "open-door policy", which resulted in a million of mostly North African migrants pouring into Germany in 2015. Her party’s popularity slumped in the following years, causing it to lose seats in the federal parliament in 2017.

Annegret Kramp-Karrenbauer was born on 9 August 1962, in the federal state of Saarland on the border with France and Luxembourg. In 1981, she joined the CDU, from 1999 she worked in the CDU faction in the parliament of Saarland, held various posts in the state government, from 2011 to 2018 she headed the Cabinet of Saarland.

© REUTERS / Hannibal Hanschke
Anti-Migration Protests in Germany Unlikely to Deter Migrant Flows – ICMPD
Since February 2018, Annegret Kramp-Karrenbauer has become the secretary general of the CDU after being nominated by Merkel. This gave grounds for the German media to call Kramp-Karrenbauer the “successor and protege" of the chancellor as party leader.

Earlier, Merkel — who has been heading the German government since 2005 — announced that she would not run for CDU leadership and did not intend to become chancellor again in 2021.