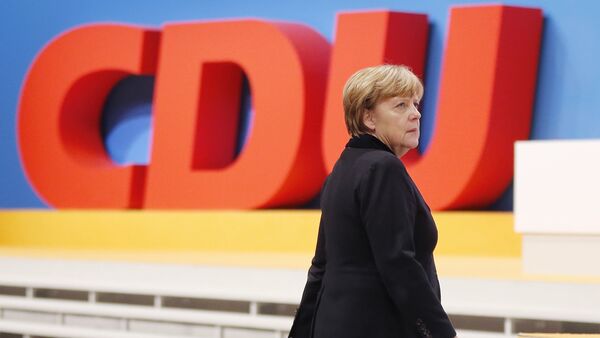 Just days before the European Parliament elections, German vlogger Rezo, who has an over 2-million-strong following on the video platform, tore into Germany’s governing Christian Democratic Union and other parties. The politicians launched a counter-attack, promising a video response.

The leadership of Angela Merkel’s Christian Democratic Union has lashed out at German blogger Rezo over his critical video, accusing the influencer of spreading nonsense. Several days ago, the vlogger, who has over 2 million subscribers to his YouTube channel, uploaded a video with a title that speaks for itself — "The destruction of the CDU" – accusing the German conservatives of destroying “our lives and our future”.

The nearly hour-long clip, which has gained over 4.7 million views and half a million thumbs-ups by the time of publication, accused the CDU of dancing to the tune of the rich, allegedly permitting the US to coordinate international drone strikes from Germany and also of having a failing climate policy. The 26-year-old, who has never been seen taking part in politics before, has otherwise devoted his videos to music, comedy, and regular YouTube challenges. However, in this new video, the YouTuber criticised the distribution of the tax burden and neglect of climate goals, as well as spending too little on education and tightening copyright regulations, among other things.

The vlogger supported his accusations against the party with studies, media publications, and the research conclusions of various foundations. Although he dedicated his clip to the CDU and its Bavarian sister party, the Christian Social Union, the Social Democrats (SPD) and right-wing politicians from the Alternative for Germany (AfD) also got their fair share of dissing.

The video, published just days before the European parliamentary elections, prompted outrage among politicians and sparked debate in Germany. According to the YouTuber, he has even received threats to himself and his family.

"I asked myself why we weren't for that matter responsible for the seven plagues in ancient Egypt", she said.

"I think everyone who watches the video and especially looks into the sources that are listed there, sees that's actually a mix of lots of pseudo-facts", he said, as cited by RTL Online, noting that the clip is the vlogger’s personal opinion, which he is free to express, but that it has nothing to do with journalism.

The politician also criticised the media, saying that one should ask oneself “why young people find out about politics there and not on well-known media portals".

However, another CDU lawmaker, Thomas Jarzombek, pointed to the CDU’s possible mistakes that may have prompted the outburst.

"The debate surrounding the #rezo video shows that in the last few years we have talked too much about refugees and too little about climate protection in the CDU", he tweeted.