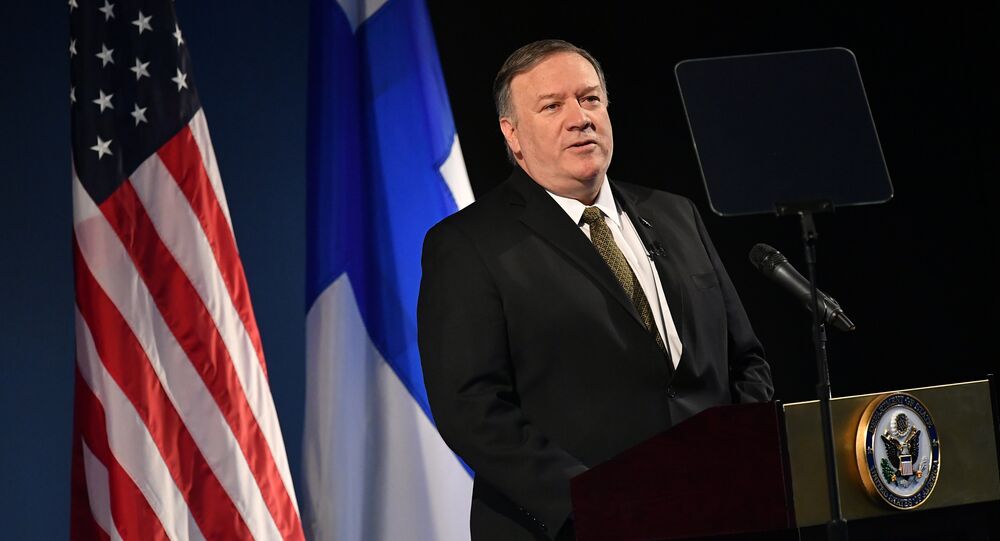 US Concerned About Russia's Claim to Northern Sea Route - Pompeo

WASHINGTON (Sputnik) - The United States is concerned about Russia's claim to Northern Sea Route, US Secretary of State Mike Pompeo said during the 11th Ministerial Meeting of the Arctic Council in Rovaniemi, Finland, on Monday.

"We are concerned about Russia's claim over the international waters on the Northern Sea Route," Pompeo said.

The senior official proceeded by saying that the US would increase its military presence in the Arctic region and create a new senior military post for Arctic affairs to counter Russia's activities in the northern sea.

“Under President Trump, we are fortifying America’s security and diplomatic presence in the area. On the security side, partially due to Russia’s destabilizing activities, we are hosting military exercises, strengthening our force presence, rebuilding our icebreaker fleet, expanding Coast Guard funding and creating a new senior military post for arctic affairs inside of our own military," Pompeo said in a speech ahead of the start of a ministerial meeting of the Arctic Council in Rovaniemi.

In April, Russian Foreign Minister Sergey Lavrov said that Russia is ready to grant support to all ships that pass through the Northern Sea Route, which runs along the Russian Arctic coast from the Kara Sea to the Bering Strait.

© AP Photo / Li Gang/Xinhua
Pentagon May Deploy Submarines in the Arctic to Deter Alleged Chinese Threat
Pompeo, however, accused Russia of putting forth what he called was an "illegal demand" on the Northern Sea Route and requiring other nations to request permission for using the route.

Pompeo also said Russia is threatening to sink any vessel that fails to comply its demand.

Russia has been stepping up its military, trade and exploration activities in the Arctic in recent years, building transport and energy production infrastructure and developing the Northern Sea Route as part of Arctic's Northern Passage that links Europe and Asia.

On China's Role in the Arctic

"China has observer status in the Arctic Council, but that status is contingent upon its respect for sovereign rights of Arctic states. The US wants China to meet that condition and contribute responsibly in the region. But China's words and actions raise doubts about its intentions. Beijing claims to be a near-arctic state, yet the shortest distance between China and the arctic is 900 miles. There are only arctic states and non-arctic states. No third category exists and claiming otherwise entitles China to exactly nothing," Pompeo said in a speech in Rovaniemi, Finland.

The Arctic Council is a top-level forum dealing with issues related to the Arctic region and promoting cooperation between the member states. The council includes the United States, Canada, Russia, Finland, Norway, Denmark, and Iceland, as well as several observer states.