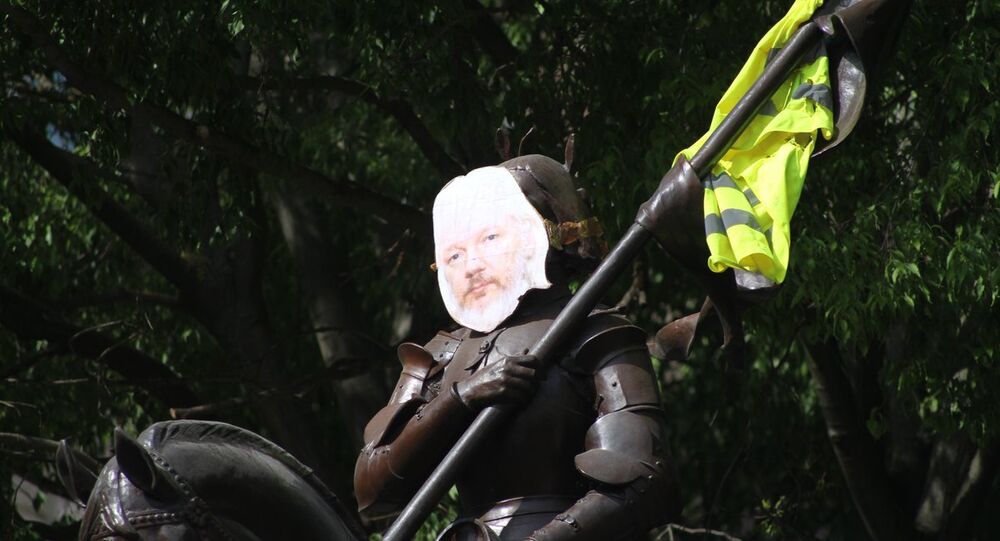 As the Yellow Vests took to the streets for the 23rd consecutive week of protests in France, someone decided to pay tribute to WikiLeaks founder Julian Assange, who was arrested at the Ecuadorian Embassy in London on 11 April.

A photo of Julian Assange’s face was attached to the head of the statue of Joan of Arc on horseback in Toulouse, France, amid Act 23 of the Yellow Vests’ protests on 20 April.

With a fluorescent vest on the spear that has become the symbol of the weekly demonstrations, the upgraded monument of the Maid of Orleans was widely perceived as homage to the WikiLeaks founder, who was detained by UK police at London’s Ecuadorian Embassy last week.

As evidenced by videos and photos from Saturday’s rallies in Paris, some Yellow Vests likewise showed support for the whistleblower, with one banner on a statue in the Place de la République reading “Vive Assange”.

While it’s unknown whether the choice of the statue of Joan of Arc was intentional or not, one may draw parallels between the case of the Australian-born journalist and the story of the French heroine, who was put on trial by pro-English clerics for heresy and witchcraft, and burnt at the stake after leading France to victory over England in the Hundred Years’ War.

The Yellow Vests protests kicked off in mid-November over an envisaged hike in fuel taxes, but even after French authorities gave up on their plans, the rallies didn’t stop, having morphed into a broader anti-government movement.

© Sputnik
Enraged by €1bn Notre Dame Fund Yellow Vest Protestors Set Paris Streets on Fire (PHOTO, VIDEO)
Julian Assange, who had been living in the Ecuadorian Embassy in London for seven years, was arrested by British police on 11 April after Quito revoked his asylum status. Shortly after his arrest, a London court charged him with skipping bail in the UK after a 2012 extradition order to Sweden, where he was being probed over sexual assault charges.

In a parallel development, US authorities have announced charges against the WikiLeaks founder, accusing him of conspiring with Chelsea Manning, a former US Army intelligence analyst, to hack into US government computers and steal classified data in 2010.

The journalist and publisher has consistently denied sexual assault allegations, brought up against him in Sweden, stressing that they were politically motivated and designed to have him extradited to the United States since the charges followed the leak of classified war logs.