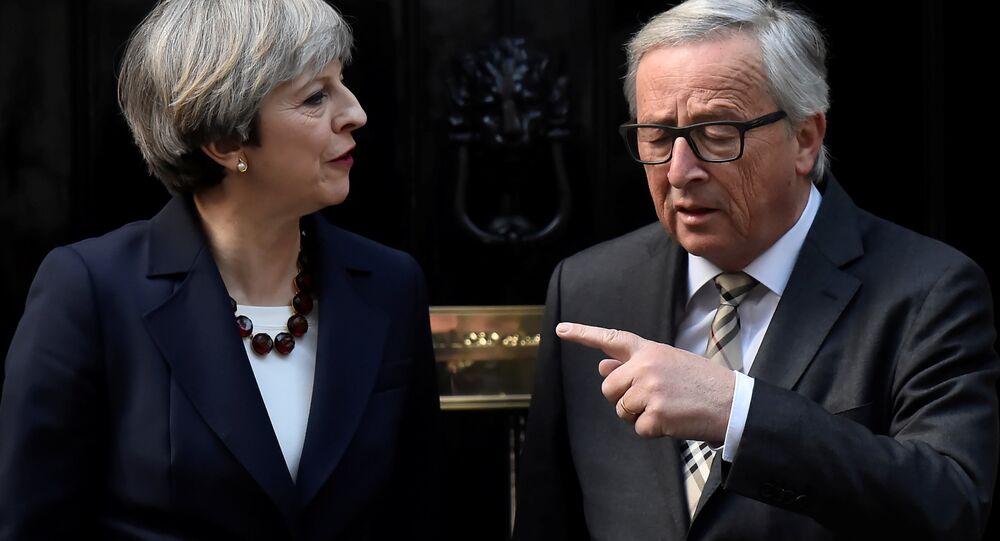 MOSCOW/LONDON(Sputnik) -European Commission President Jean-Claude Juncker said Monday that the EU and the United Kingdom have agreed on an Irish border document which would complement the Brexit deal without any changes.

Juncker also said during a joint press conference with UK Prime Minister Theresa May in Strasbourg that Brussels would endorse the new documents on Brexit if the deal is supported by the UK Parliament.

He also recommended that the European Council should endorse the agreed documents at its meeting on 21-22 March, provided it was subject to a positive vote in the UK parliament.

Juncker also urged British lawmakers to back the Brexit withdrawal bill on Monday after agreeing on enhanced legal guarantees with May. "The choice is clear. It is this deal, or Brexit may not happen at all. Let's bring the UK's withdrawal to an orderly end", Juncker said.

READ MORE: Academic on UK Political Deadlock: 'My Suggestion — There Won't be Any Brexit'

In turn, May said in Strasbourg on Monday that in addition to a joint instrument and a joint statement announced earlier in Parliament, Britain would also make a Unilateral Declaration on the so-called backstop — an insurance policy aimed at avoiding a hard border on the island of Ireland.

© AP Photo / Geert Vanden Wijngaert
The Lost Weekend: Tusk and Barnier Tease May as Chances of Brexit Deal Fade
In January, UK lawmakers rejected the existing version of the UK-EU Brexit deal, citing fears that the United Kingdom might remain in a permanent customs union with the bloc should the backstop policy, aimed at preventing a hard border on the island of Ireland, remain in its current form. However, EU officials have repeatedly said that the Brexit deal is not subject to renegotiation.

While London managed to negotiate a withdrawal deal with Brussels after months of intense talks, the agreement has faced a wave of criticism in the United Kingdom and spurred mounting calls for a second Brexit referendum, with Parliament so far refusing to endorse the deal due to the controversial provision on the Irish border backstop.

The United Kingdom is set to leave the European Union on 29 March.