With the meaningful vote on her Brexit deal set to take place tomorrow; British Prime Minister Theresa May has allegedly been advised to extend Article Fifty should it not get through parliament. Would this be a good idea, or a pointless delay? Sputnik spoke with Dr. Connal Parr; Lecturer in History at Northumbria University for more…

Sputnik: Will Theresa May be able to get her Brexit deal through parliament?

Dr Connal Parr: No absolutely not. I don't think there are any concessions that Theresa May or the EU have made, they've always had the deal on the table as the only deal that has been agreed, and it looks as if Theresa May's plan of winding down the clock in the hope that this will then force MPs in her own party, but also across other parties to then suddenly get behind her deal with the threat of no deal instead, isn't going to work on Tuesday.

It looks as though the deal is going to be quite heavily defeated again; perhaps not to the extent it was on the 15th of January, but it's going to suffer another defeat.

Sputnik: Will Article Fifty be extended?

Dr Connal Parr: The extension is the only show and best show in town for everyone really. The Irish government has said that they wouldn't stand in the way of an extension to the process, which basically would be a code for all the EU members need to then agree to the extension process.

READ MORE: It's Harder to Guarantee No Border in Ireland Under No-Deal Brexit — MP Leadsom

© AP Photo / Petros Karadjias
Friend or Foe? Tony Blair Advised Macron on How to Derail Brexit - Report
If Ireland says that; it means that the rest of the EU will get on board with that as well, but it doesn't mean that there's going to be any changes to the backstop, and this is what Brexiteers have never got their heads around; which is that, there has to be a backstop of some kind for Ireland, being, of course, the temporary measure designed to prevent a hard border on the island of Ireland, and this is the particular detail that's never been understood properly.

Sputnik: Could Brexit be cancelled if no consensus on how to depart the EU is reached?

Dr Connal Parr: This is what Theresa May's been saying for a long time. She did say at a relatively early stage, that it's her deal, no deal, or no Brexit.

© CC0 / Pixabay
EU Reportedly to Crush UK With Billions in Brexit Delay Punishment, as Parl't Preps to Vote
If Gordon Brown and John Major as former Prime Ministers; albeit Prime Ministers who suffered election defeats called for there to be an extension period of a year, then what happens at the end of that year?  I think no one really has an answer to this, other than to say that for the time being that there's certainly no Brexit, but also in the long run, what happens after that?

A week is a long time in British politics as Harold Wilson said; a year's going to be an exceptionally long time if there is some other kind of crisis which leads to an election, as Labour has said that they are moving more towards a second referendum option, so in the short term there's definitely no Brexit, and who knows after a year or so, whether there will be any Brexit at all.

My suggestion if I was a betting man would be that there wouldn't be any Brexit.

This is a very divisive issue whatever happens, and some of the people who are calling for a second referendum do miss this problem. 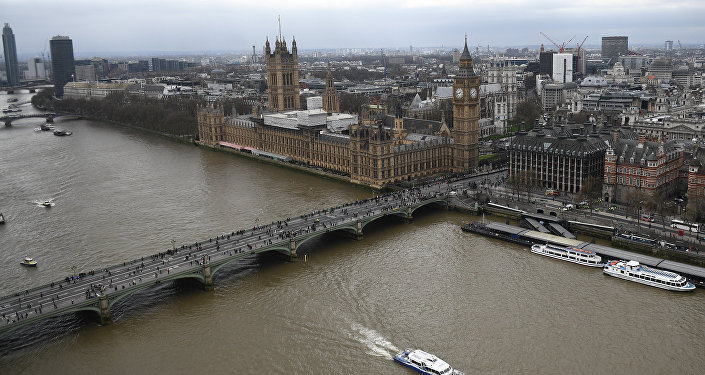 It would be narrow again; and then you have the prospect of those who are disillusioned with the British political class, which goes back to many people who argued that it goes back to Tony Blair's decision to invade Iraq in 2003, and it worsened during the 2009 expenses scandal, where there's this climate of distrust and disillusionment with the political class which crystallises with the Brexit vote.

To then betray almost the Brexit vote; though that's strong language, but to not carry out Brexit after that, there's no question that there would be an almighty backlash from right-wing elements.

© AFP 2019 / OLI SCARFF
If Brexit Deal Approved This Week, UK Can Leave on 29 March – FM Hunt
Whether that would come back in the terms of the return of UKIP, or perhaps something harder, perhaps something more reactionary even than UKIP if that's possible emerging in British political life, it could be a very serious force by who knows; somebody such as Tommy Robinson would be getting enormous political mileage out of that.

That is what the Labour party incidentally feared; having already lost those working-class areas in the north and in the midlands, so people do have to be prepared, those calling for a second referendum and to keep this process going, for that response and I'm not sure that they are.