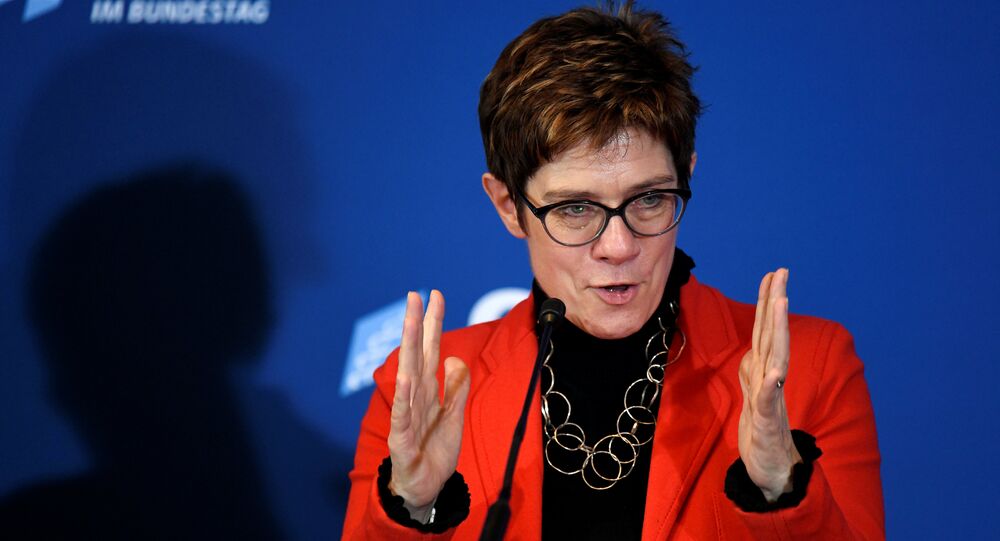 MOSCOW (Sputnik) - Annegret Kramp-Karrenbauer, who succeeded German Chancellor Angela Merkel as the leader of the Christian Democratic Union (CDU), antagonized many German politicians as well as general public when she made a joke about gender-neutral toilets in a humorous speech delivered during carnival celebrations.

Germany has a long tradition of carnivals, with main festive events usually taking place the last week before the Lent. The city of Stockach in Baden-Wuerttemberg holds a so-called Court of Fools every year, where a prominent personality is "prosecuted" in a mock trial. Former invitees include, among many others, Merkel, Social Democratic Party (SPD) leader Andrea Nahles, Economy Minister Peter Altmaier. This year's guest, Kramp-Karrenbauer, poked fun at progressive Berlin in a joke that many fellow politicians deemed ill-placed.

The CDU leader joked on Thursday about a "Latte-Macchiato faction," which installed gender-neutral public bathrooms in the German capital. Berlin's government unveiled plans to convert more bathrooms into unisex toilets in 2017, explaining that this would end discrimination against intersex and transgender individuals.

According to Kramp-Karrenbauer, these facilities were for the men who "do not know if they must sit or stand when they pee." The quip was reportedly met with laughter when made, but as the quote was repeated online, it elicited different reactions.

"Annegret Kramp-Karrenbauer shows what ultraconservative wind is now blowing in the Union," Klingbeil wrote on Twitter.

Jens Brandenburg, a member of the opposition Free Democratic Party, wondered why it was "so difficult to make a humorous speech without trite jokes bashing minorities."

Klaus Lederer, Berlin's culture senator, said it was a "sorry affair" when the chair of the largest party in the Bundestag "finds it funny to denounce at a pub-debate level at the carnival people who do not correspond to the current macho norm."

The Bundestag leader of The Left opposition party, Dietmar Bartsch, said the joke was "one more reason to fight against this woman becoming a chancellor."

Alexander Vogt, who chairs the CDU's gay and lesbian association, told the SWR broadcaster that the party leader should offer some clarifications.

However, some of CDU members defended the party leader. A lawmaker representing a constituency in Baden-Wuerttemberg, Kai Whittaker, called the reaction to the joke "completely gaga."

"Anyone who sees the Stockach's Curt of Fools, will find out that they are making fun of men," Whitaker wrote on Twitter.

Meanwhile, the spokesman for the German government, Steffen Seibert, said on Monday he did not comment on "carnival speeches."

Kramp-Karrenbauer, considered a Merkel ally, was elected as the CDU leader in December after the chancellor herself announced that she would not run for another term as the party chairwoman.