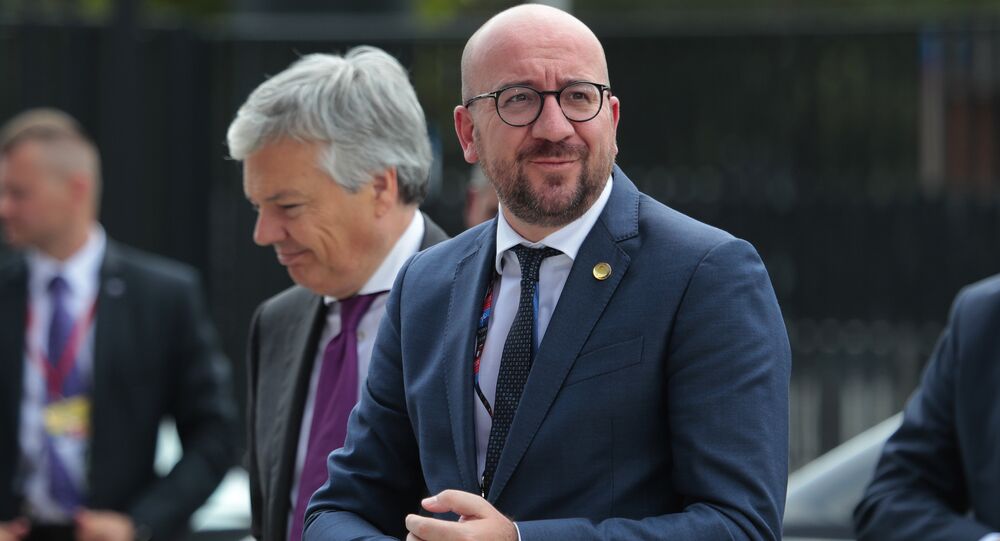 Belgian PM: No Confidence Vote From Parliament Needed After Resignations

BRUSSELS (Sputnik) - The Belgian federal government does not plan to appeal to parliament for a vote of confidence after the breakdown of the ruling coalition, since under current circumstances it is not required by the constitution, Belgian Prime Minister Charles Michel said on Sunday.

"The New Flemish Alliance decided to leave the coalition and a responsible coalition of Liberal Christian Democrats was formed to ensure continuity, stability in the interests of institutions and for the benefit of people as well as to interact with parliament as a matter of priority… Under the current circumstances, the head of government from a constitutional point of view should not ask for a vote of confidence," the prime minister told RTL Info broadcaster.

However, Michel stressed that he still planned to hold consultations with representatives of parliamentary parties on the situation.

© REUTERS / Aaron P. Bernstein
Bannon, Le Pen Join Anti-UN Migration Pact Meeting in Flemish Parliament
The government crisis in Belgium was caused by the decision of Flemish nationalists from the New Flemish Alliance party to withdraw support for the UN migration pact, which the country's premier, in September, officially promised to sign. Five members of the government have resigned. Their mandates were redistributed among other ministers. The terms of the next parliamentary elections, scheduled for spring 2019, have not yet been changed.

The new coalition currently represents the minority in parliament.

The UN Global Compact for Migration represents the international community's attempt to establish a common global approach to all aspects of international migration. The pact comprises 23 objectives for better managing migration at local, national, regional, and global levels. The document has recently been losing support over concerns it will affect national migration policies, while a number of countries have already abandoned their plans to sign the agreement.