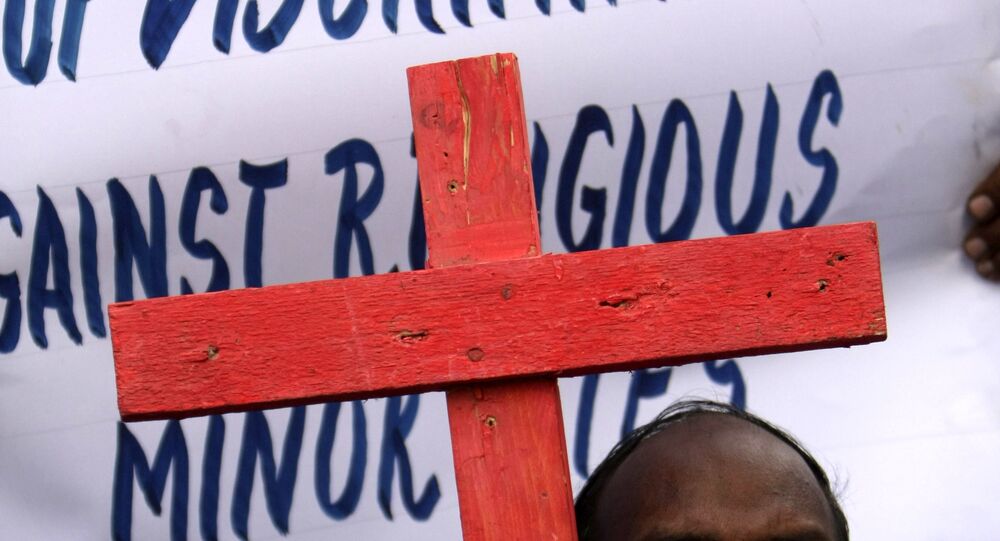 A group of politicians and campaigners have written to the UK Foreign Minister Jeremy Hunt, urging him to grant asylum to Asia Bibi, a Pakistani Christian woman acquitted in a blasphemy case.

Labour MP Mar Creagh, one of the signatories, said it was a "mark of shame that Britain has failed to offer Asia Bibi."

Bibi was put on death row for blasphemy in Pakistan almost ten years ago, following allegations by Muslim women she worked with that she insulted Prophet Mohammed. Bibi denied the claims but was jailed and sentenced to hang on November 11, 2010.

© AP Photo / Pervez Masih
Christian Woman Freed From Pakistani Jail Amid Calls to Hang Her for Blasphemy
The mother of three was eventually set free, following years in jail, after the Pakistani Supreme Court overturned the conviction last month.

The woman is being held in Pakistan, after Imran Khan's government agreed to allow a petition challenging the court decision that had angered religious extremists in the country, actively opposing Bibi's release by organizing rallies in several large cities.

Bibi's husband has appealed to the UK government, among others, to grant asylum for his wife. Downing Street has not yet agreed to do that, which prompted a number of Catholic politicians and activists to send a letter to Jeremy Hunt.

"We are very aware that there are extremist elements in this country". Disappointed we're seen this way. It's spurious that Britain's complacency is being blamed on our proud multicultural nature, rather than institutional coldness.

Then the protesters need to be dealt with, not refuse help to a woman who needs it and deserves it.

Asia Bibi is free from prison but is being prevented exit from Pakistan by PM Imran Khan's Government till a petition from Tehreek-e-Labaaik is heard. This is due to Mr Khan's historic and demoralising… https://t.co/DQ74na302N

I mean where's Yvette and Harriet, surely they have knocked up a petition by now. 🙀

As a Pakistani who lives in London I completely agree. It is sad indeed that she hasn't been offered asylum in UK. And if UK caves in because it fears extremist backlash what is the difference between UK government and the Pakistani government? Both surrender to extremists?

"This startling hostility towards Asia Bibi within the UK could be one reason Britain did not offer asylum and perhaps this it is more thoughtful than it first appeared and a kindness after all," Wilson Chowdhry of the British Pakistani Christian Association, said.

Former UK Foreign Secretary William Hague argued that he would refrain from making any assumptions about what the government may or may not be doing with regards to Bibi's case.

"In my experience decisions like these are incredibly complicated and in some cases dependent on absolute secrecy. No sensible Minister would say anything in public," Hague added.

Bibi's case is supported by the Vatican, while Italy's Interior Minister Matteo Salvini recently suggested that Rome was working "discretely" with other Western countries on her case.