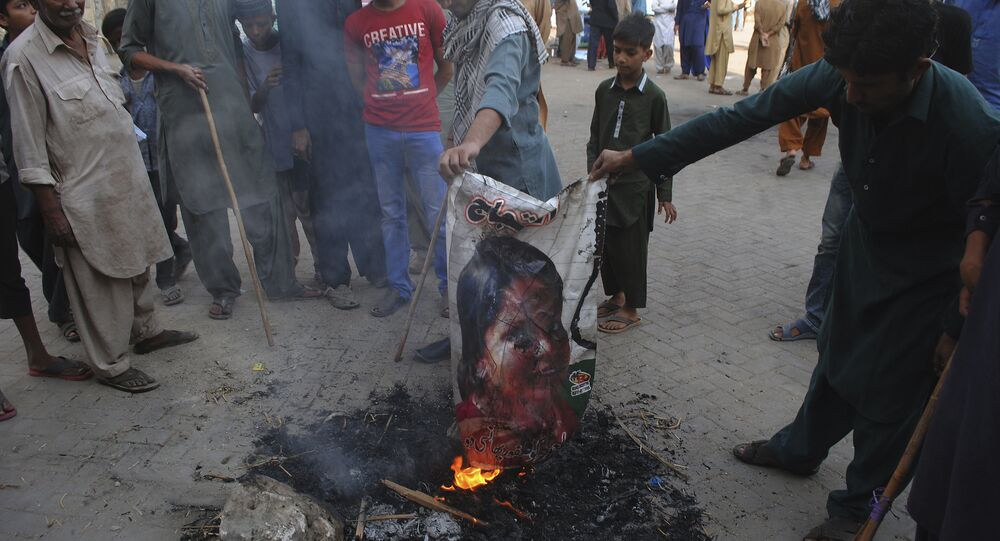 Last week Pakistan's Supreme Court acquitted Asia Bibi, who had been put on death row for blasphemy several years ago. This enraged religious hardliners, who brought thousands of protesters to the streets, demanding that the mother of three be executed in public. They are gearing up for a new wave of protests against her release.

Asia Bibi, who spent eight years on death row for insulting the Prophet Mohammed in a quarrel with Muslim workers in 2009, left jail a week after her conviction was overturned by the country's highest court.

"She has been freed. I have been told that she is on a plane but nobody knows where she will land," said her lawyer Saif-ul-Mulook, who has left Pakistan for the Netherlands, fearing for his life following the acquittal, and has been offered temporary asylum by the Dutch authorities.

President of the European Parliament Antonio Tajani has tweeted that Asia Bibi had been transferred to a safe place. However, she remains in Pakistan, according to Foreign Ministry spokesman Muhammad Faisal.

Earlier the country’s government struck a deal with Islamists to impose a travel ban on Bibi, after religious extremists poured into the streets by the thousands to protest in several large cities. After the Pakistani Supreme Court decided to set her free on October 31, some 5,000 protesters rallied against her release, blocking roads. They demanded that the acquittal verdict be overturned and that the woman be publicly hanged. Her discharge was postponed after the government failed to come to terms with Islamists.

The Islamist parties have now vowed to hold more rallies against her release, and the number of protesters is expected to swell sharply.

Meanwhile, Bibi's husband and three children, who have been forced into hiding for fear of reprisals, has asked UK Prime Minister Theresa may to grant them asylum and essentially, “freedom,” as he put it in Punjabi in released footage. He, separately, requested asylum from Canadian Prime Minister Justin Trudeau and US President Donald Trump. At the same time, Italy's Interior Minister Matteo Salvini noted that Italy was working "discretely" with other Western countries on the case of Asia Bibi, saying he “will do everything humanly possible to ensure a future for this woman."

The woman was convicted in 2010 after she allegedly insulted the Prophet Mohammed in a quarrel with Muslim workers a year earlier. Bibi was working in the field near her home village in Sheikhupura, Punjab, when one of the women working with her insisted that Bibi was "unfit to drink from the same water bowl as them" because she was a non-Muslim. She responded by praising Christ and discrediting their religion; her words were met with physical abuse. Later she was thrown in jail.

Blasphemy is a very sensitive issue in Pakistan, and is punishable by death. The country's telecommunications companies have blocked hundreds of websites deemed to be blasphemous, particularly those containing pornography.

According to a US Commission on International Religious Freedom (USCIRF) study, Pakistan’s blasphemy law is used at a level unequaled by any other country, with 14 individuals on death row and 19 serving life sentences.