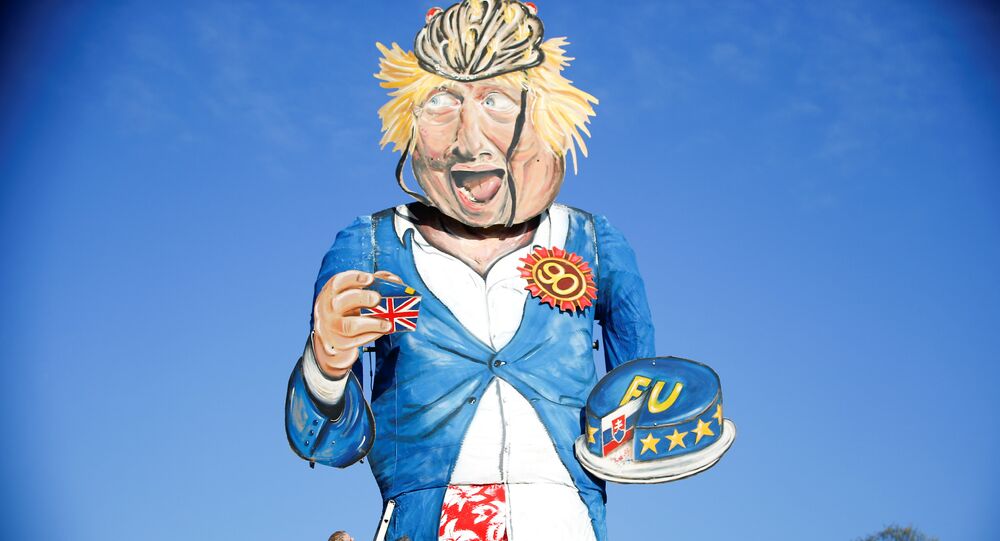 While he insists on setting a match to the UK government's Brexit policy, his own giant caricature will go up in flames on Saturday.

Bonfire celebrations are annually held in British cities in November, and this year a bonfire in Edenbridge, Kent will see an effigy of an outspoken Brexiteer Johnson set on fire.

Artist Andrea Deans spent six days to make an effigy of Boris Johnson, wearing shorts and a cycle helmet, while holding a cut EU cake in one hand and a piece of it in the other.

We announced this morning that our chosen effigy is @BorisJohnson — this is how our artist created the 11m caricature. Full event info at https://t.co/I84V2ElMOr — if Boris would like to push the button to start our firework display on Saturday we would love that 😁🔥💥 pic.twitter.com/pgHjVBuQZm

"I wanted him to come across scruffy because that's what he appears most of the time, wearing his suit and a helmet at the same time and you can see him running in really peculiar shorts, that's why we put those on. Because he appears like that sort of character and also I think, Boris being Boris, he'll probably see the funny side of it and I'm hoping that he will even come along on Saturday and maybe bring a cake," the artist said.

Boris Johnson tops a popular vote at st last. The good people of Edenbridge in Kent have voted to burn his effigy at the stake on Nov 5th, Guy Fawkes night. A shrewd choice by the organisers. When Fawkes was caught at Parkiament..in 1605, he gave a false name it was Johnson 1/2 pic.twitter.com/3ABBOXkyxo

I live nearby. May pop along to enjoy seeing this go up in smoke.

I think we have to be very very careful of suggesting violence of physical threats of any kind towards public servants. However, since Alexander de Piffle Boris Tosser Johnson has not served his country at all but CONSPIRED to ruin it, BURN HIM! BURN HIM! ROAST HIS LIVER!

Towns up and down the country burn Guys of famous figures to take the mickey out of the rich and powerful. Kent voted for Brexit so this says all your need to know about how well it's going. If you're going to point fingers for inflaming hate, try pointing at Boris.

In 2015, A giant statue of a naked David Cameron — then Prime Minister — with a pig's head on his lap wearing union jack boxing shorts was paraded through the streets of Lewes in England and then set on fire.

© AFP 2021 / Ben Stansall
Spectators use smartphones to photograph an effigy depicting Britain's Prime Minister David Cameron as it is paraded through the streets of Lewes in Sussex, southern England on November 5, 2015, during the traditional Bonfire Night celebrations.

READ MORE: What a Guy! Pigs Might Fly! Naked Cameron Goes Up in Smoke

Firework parties, accompanied by carnival processions and burning of effigies, are held in Britain to mark the 5th of November (the date of the infamous Gunpowder Plot of 1605).

The Edenbridge Bonfire will see costumed walking parties and marching bands marching through the streets.

Its organizers have also welcomed Boris Johnson to push the button to start the firework display.

What a Guy! Pigs Might Fly! Naked Cameron Goes Up in Smoke