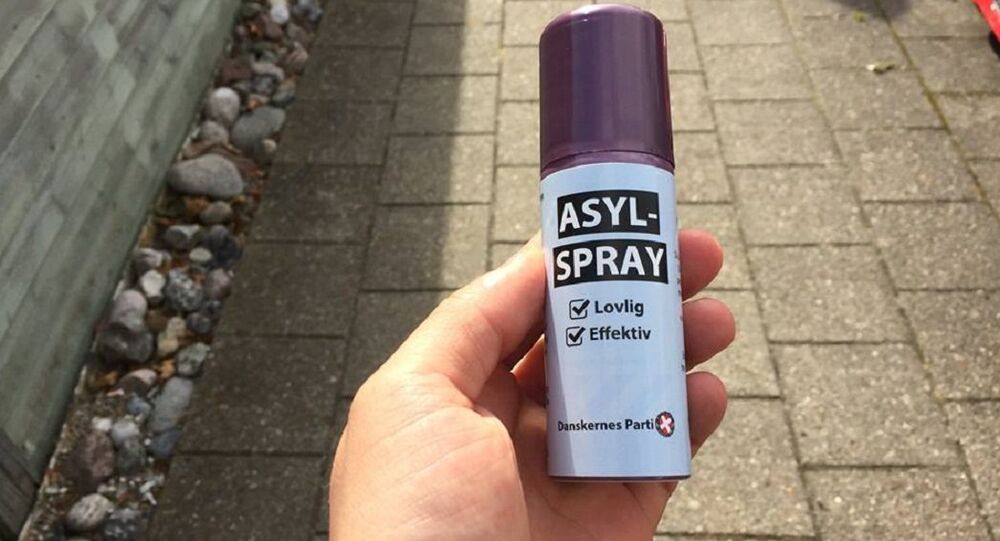 A controversial street protest conducted by the now-disbanded anti-immigrant party has led to a belated prison sentence for racism, violation of the weapons act and spreading propaganda.

Former Danes' Party leader Daniel Stokholm has been slapped with a 30-day conditional sentence for handing out "anti-migrant" spray in the street during a 2016 protest. Another three of his fellow former Danes' party members received fines roughly equal to half a month's wages, Danish Radio reported.

On September 24, 2016, the four politicians handed out cans of hair spray labeled "Refugee Spray" in a protest in Haderslev to raise awareness about the negative consequences of mass immigration from non-Western countries, such as violent crime and rape. Haderslev, a town of 20,000, was chosen due to a number of local women reportedly being harassed by asylum-seekers. According to the Danes' Party, over a hundred cans were distributed. Within a matter of several days, the a similar protest was staged in the town of Thisted.

According to the party, the "anti-migrant" spray was a necessary alternative to pepper spray, which is outlawed in Denmark. Earlier that year, a 17-year-old Danish girl was charged for using pepper spray after being sexually assaulted by a dark-skinned man.

"Would you rather be safe without spray? The immigrants who have come to Denmark posing as 'refugees' have assaulted Danish girls and created insecurity," the sticker on the said, pledging a "legal and effective" solution.

The four men were all convicted of racism and violations of the weapons act. Additionally, Daniel Stokholm (formerly known as Daniel Carlsen) was charged with spreading propaganda.

Neither Daniel Stokholm nor his defense attorney Michael Juul Eriksen were satisfied with the verdict and decided to appeal the case to the Supreme Court.

According to Juul Eriksen, the campaign was aimed at non-Western immigrants and doesn't fall under Section 266b of the Criminal Code, which is known as the Racism Section and protects against mockery and defamation due to religion, skin color and race. Juul Eriksen stressed that the campaign was aimed at people who commit crime, which has nothing to do with either race of religion. All the sentenced men denied the racist accusations.

The Danes' Party was founded by in 2011 by former members of the Danish National Socialist Movement, describing itself as nationalist and ethnopluralist. It ran for municipal councils in 2013, but failed to win any seats. In 2017, it disbanded as its leader announced his retreat from politics in order to concentrate on his family.

During its brief stint in Danish politics, the Danes' Party sparked several controversies. In 2016, the party launched an advertising campaign against multiculturalism featuring white silhouettes of playing children with the slogan "Your kids deserve a Danish Denmark." The same year, the Danes' Party suggested that team France should rather play in African league based on the number of black footballers of African origin in its midst.