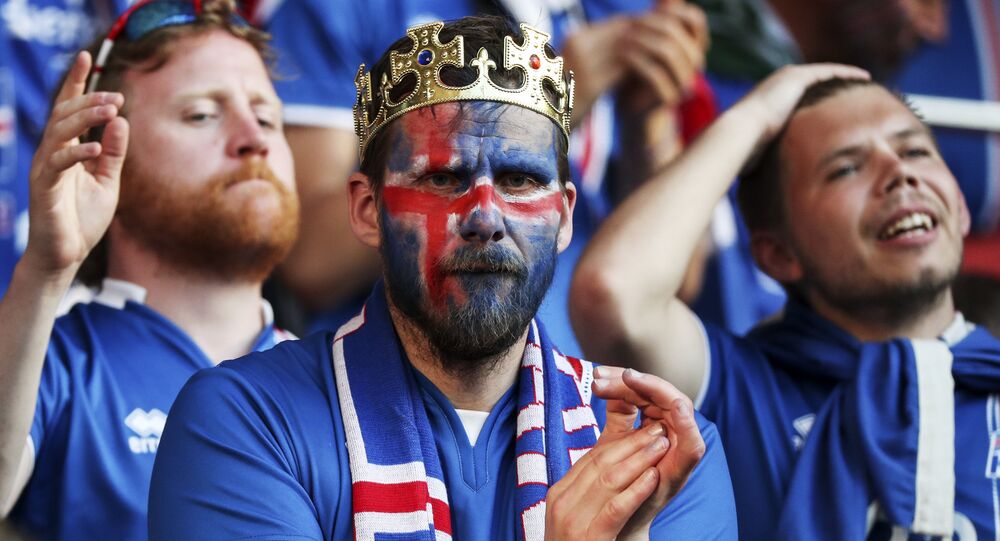 This summer little Iceland came into the limelight in Europe with its stellar performance at Euro 2016. The brave islanders pulled off the tournament's biggest shock by knocking out perennial favorite England in the round of 16 and won the hearts of football fans across Europe. However, the heroic squad is not happy with some of its new fans.

© REUTERS / Michael Dalder
Viking Spoils: Icelandic Football Squad's Heroic Feats Net Millions
As the Icelandic saga ended in tears after a bitter loss to host nation France in the quarterfinals, the far-right Danes' Party posted a Facebook post, insinuating the France's national team should be ruled out of the Euro 2016 tournament since many of its players are of African heritage.

The post features a group photo of black French footballers contrasted by a photo of Icelanders. To make the point even clearer, the French photo had a black lining, while Iceland was framed with a white one. The readers were encouraged to share the post if they agreed that 'France' should rather play in the African Nations Cup, the Danish newspaper Berlingske reported.

In addition, the post had a political undertone, as the contrasted photos were used to give a boost to the Danes' Party, which is currently out of the game.

"If you disagree that Europe and Denmark should both become an African backyard, then enter your email address at www.stemdansk.dk [vote Danish], so that the Danes' Party can be allowed to run for parliament," the notorious post read.

Consequently, Iceland's Football Association KSÍ came forth with a stern condemnation of the nationalist Danes' Party's usage of the team's imagery for "promoting racism." According to the Icelanders, "separatist forces have no place in football."

KSÍ disavowed any connection with this "hate propaganda" and regretted any possible association with the Danes' Party. Subsequently, the party was requested to remove the post, which remains published as of noon Friday.

The overtly nationalist Danes' Party remains, very much like their Swedish cousins Swedes' Party, a marginal force with an ultraconservative agenda, advocating kicking out all non-Western immigrants. Earlier this year, the party caused quite a stir with bus advertisements depicting white silhouettes of playing children with the slogan "Your Children Deserve a Danish Denmark."

​Denmark enjoys a special relationship with Iceland after having reigned over the Nordic island for centuries. Iceland gained full independence from Denmark in 1944.

Iceland Starts From Scratch, Choosing 'Ordinary Guy' as a President