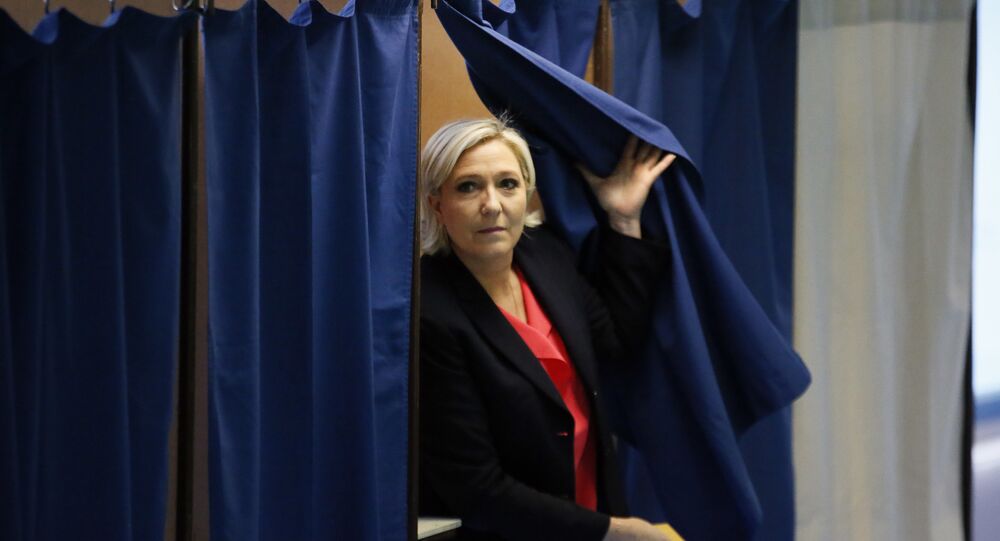 French President Emmanuel Macron has been under pressure since the emergence of footage showing his top bodyguard Alexandre Benalla assaulting a protester.

Marine Le Pen, leader of France's National Rally party, formerly known as the National Front, has signaled her readiness to support the opposition's motion of no confidence in President Emmanuel Macron's government over the incident with Macron aide Alexandre Benalla allegedly beating a protester.

Earlier, France's opposition Republicans party announced plans for a motion of no confidence in Macron's government, with its leader Christian Jacob saying that "the government has failed and must be held responsible in front of parliament."

In an interview with the French TV channel BFM, Le Pen said that by planning to vote in favor of the motion, she intends "to express our party's disagreement with the existence in France of the authoritarian state created by Mr. Macron."

Le Pen suggested that most people in France would back the vote of no confidence in the country's president and the government who "tried to hide the facts pertaining to the Benalla case."

"Our participation in the motion aims to indicate the negative attitude of the French towards such methods," she added, in an apparent nod to the Macron aide.

Commenting on Macron previously calling the incident a storm in a teacup, Le Pen slammed it as a "provocation" and "a show of political immaturity".

"We are dealing with the obvious desire of the Elysee Palace to hush up this case which can be described as a scandal of national scale," she underscored.

Le Pen's interview came after Macron admitted he was "to blame" for the incident with his former security aide, saying that "if anyone is looking for who is responsible, it's me and me alone."

© REUTERS / Philippe Wojazer
Macron's Aide Assault Case 'Was the Last Thing We Discussed' With President - Minister
The French President's recognition came a long time after the emergence of the May 1 footage capturing Alexandre Benalla in riot police gear. On the video, the man is seen tackling a young rioter to the ground and punching him repeatedly before fleeing.

Shortly after, Benalla was indicted and placed under judicial control as the Elysee Palace announced its decision to launch Benalla's firing procedure.

He is currently facing multiple charges, including violent acts, interfering in the work of public services, wearing an official insignia without authorization, concealing video materials and breaching professional secrecy.