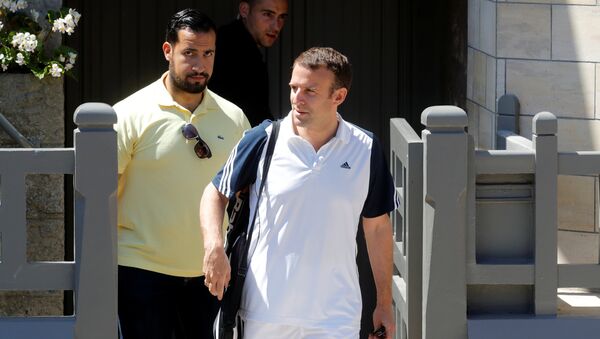 PARIS (Sputnik) - French President Emmanuel Macron is more concerned about the promotion of his constitutional reform through parliament rather than the incident with his aide Alexandre Benalla, French Interior Minister Gerard Collomb said Monday.

"I met with the president of the republic this weekend. What happened [with Benalla] was the last thing we discussed. The discussion is simple – truth and only truth, facts and only facts. The president is more concerned about the promotion of the constitutional reform [through parliament] and its possible blocking," Collomb said, reporting on the incident to the members of the National Assembly.

"With all the firmness, I denounce the actions of Mr. Benalla, committed by him on May 1 or after this date. They in every way contradict my values," he stressed.

Macron Aide Busted Beating Protester Released From Custody - Reports
The high-profile case broke out after a May 1 video emerged capturing Benalla in riot police gear. On the video, the man tackled a young rioter to the ground and punched him repeatedly before fleeing. Last week, the Elysee Palace announced the decision to launch Benalla's firing procedure. Benalla has already faced multiple charges, including interference in the exercise of public office and an unauthorized wearing of official insignia.

Benalla’s case drew much public attention. Another Elysee palace security official, Vincent Crase, has also faced the similar charges in connection with the case. Three policemen have been suspended from duty on suspicion of transferring CCTV camera images showing the violent scene to Benalla. The probes into the incident were launched by Paris prosecutors, the General Inspectorate of the National Police (IGPN) and a special parliamentary commission.

Since taking office, Macron has been seeking to promote a constitutional reform, which stipulates a number of changes such as a 30-percent reduction of the number of members of both parliamentary chambers, the limit on the number of re-elections, and a partial proportional representation in parliamentary election.