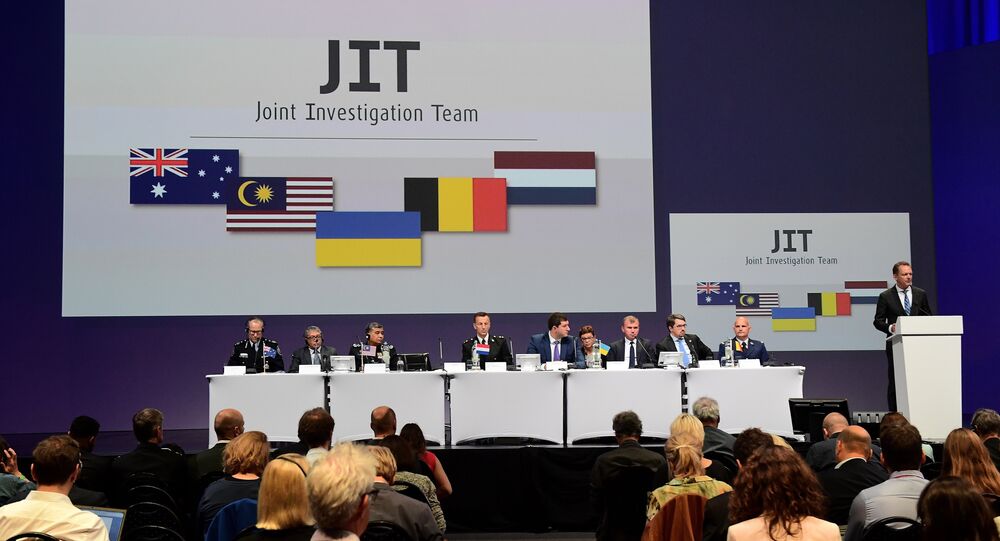 MOSCOW (Sputnik) - The Netherlands de facto dropping charges against Ukraine over the latter’s failure to close airspace over the zone of military conflict in Eastern Ukraine is a "blatant fact," the Russian Foreign Ministry said on Tuesday.

"It is a blatant fact that the Netherlands has actually cleared Kiev of charges for not closing the airspace over the area of military actions in the Eastern part of the country … They turned a blind eye on Kiev’s failure to provide such important information as data from the radar station, the information on the location and activities of the Ukrainian air defense systems, the records of conversations between the Ukrainian dispatchers," the statement read.

© Sputnik / Andrei Stenin
MH17 Crash Four Years on: Probe Continues, While No Solid Proof Presented So Far
Moscow is also concerned over the "biased" probe, which relies on the data from the social networks and unreliable sources, such as infamous "pseudo-investigators" from the Bellingcat agency, according to the ministry.

However, Russia is still ready to cooperate on the investigation into the deadly plane crash, the ministry noted.

At the same time, EU foreign policy chief Federica Mogherini has expressed condolences to the families of victims of the plane crash as July 17 marks the fourth anniversary of the incident.

The bloc’s foreign policy chief has also supported the findings of the Dutch-led Joint Investigation Team (JIT), which in late May concluded that the Buk missile system used for downing the plane belonged to the Russian Armed Forces.

"The Joint Investigation Team on 24 May presented further findings of its independent, professional and impartial investigation, concluding that the BUK installation used to shoot down flight MH17 belonged beyond doubt to the armed forces of the Russian Federation. Against this background, we will continue to call on the Russian Federation to accept its responsibility and to fully cooperate with all efforts to establish accountability," Mogherini said in a statement.

© REUTERS / Maxim Zmeyev
'No Conclusive Evidence to Point at Russia' Over MH17 Crash, Malaysian Transport Minister Says
Moscow has vehemently denied JIT's findings. Commenting on the investigation, the Russian Defense Ministry said that not a single Russian air defense system had ever crossed the Russian-Ukrainian border. According to the ministry, Russia has provided the JIT with exhaustive evidence, which pointed to the involvement of Ukrainian Buk systems in the MH17 crash.

Russia's Almaz-Antey, the manufacturer of the Buk systems, also rejected JIT's findings, saying that it held three simulations, which showed that the missile was launched from the Zaroshchens'ke area, which was controlled by the Ukrainian army at the time of the crash.

Four years ago, on July 17, 2014, a Malaysia Airlines Boeing 777 flying from Amsterdam to Kuala Lumpur crashed near the city of Donetsk. All 298 passengers and crew on board the aircraft died. Kiev accused local militias of downing the aircraft, while they stressed that they had no weapons capable of downing such a plane.