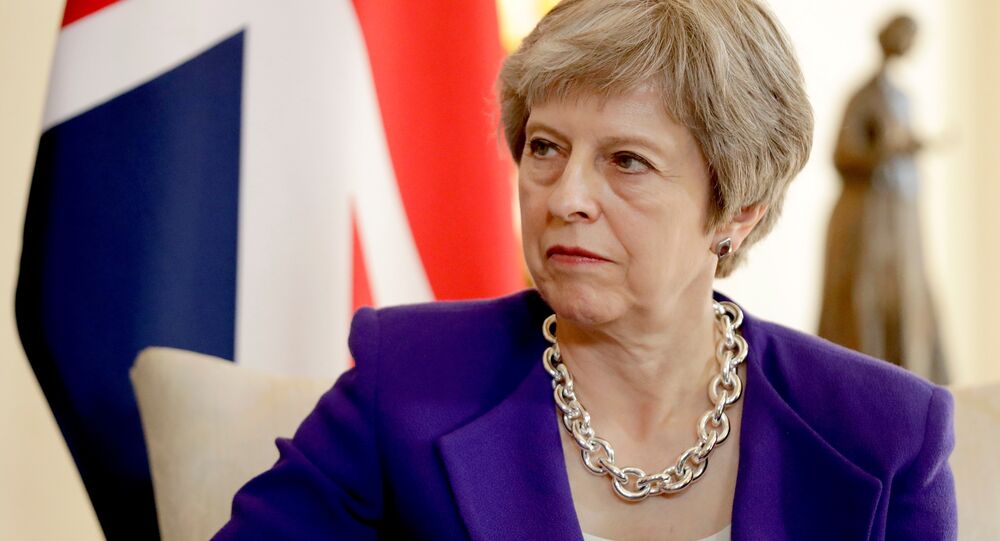 Following the overnight resignation of the UK Brexit Minister David Davis, British politicians and political pundits have suggested a variety of ways the UK government should deal with the emerged crisis.

Calls for a no confidence vote, a snap election, another Brexit referendum and a new independence referendum in Scotland have surfaced online on Monday.

Mr. Davis said he didn't believe in the government's vision for the EU-UK relationship, which "would be a risk at least of delivering a poor outcome," adding that Britain was "giving too much away, too easily."

The UK PM Theresa May dealt a significant blow in the light of her Brexit Minister's resignation just days after she thought he reached an agreement with her divided Cabinet. While a replacement for Davis — Dominic Raab MP — has already been announced, the damage to the PM and her leadership has been done.

Submitting Article 50 before having agreed a plan was an act of wanton vandalism against our country.

Brexiteers lit the fuse and ran away leaving our country weakened, confused, and in a mess of historic proportions.

Not another step should be taken without a People’s Vote

If the moment of meltdown is earlier than we expected.. #indyref2 needs to be considered sooner

No deal is better than a bad deal and Chequers looks pretty poor. https://t.co/I5aQK2HP0t

Looking forward, David Davis' resignation will have enormous consequences on Brexit. Theresa May could face a vote of confidence if Davis, Rees-Mogg and co. rally enough rebellion among backbenchers. Even if May wins, the scraps of authority she has left will be in tatters.

May's response shows that she is controlled by the civil service.

For Brexit to succeed we must get rid of this awful, duplicitous PM. https://t.co/Mmq4jboCpi

David Davis resigning at such a crucial time shows @Theresa_May has no authority left and is incapable of delivering Brexit.

With her Government in chaos, if she clings on, it's clear she's more interested in hanging on for her own sake than serving the people of our country.

@theresa_may running a minority government with no authority.
Weak, Weak, Weak
With @DavidDavisMP endorsing the above by resigning today we need a #SnapElection #Labour #daviddavies #brexit

David Davis has resigned. Spare us weeks of this coalition of chaos falling to pieces — and give us a general election.

Davis resigns. Mark this spot. This is the point where it becomes more rather than less likely that we will not now have Brexit without first having either a General Election or a Referendum.

The #chequers unity didn’t last long. This UK government is in utter chaos and ebbing authority by the day. What a shambles. #DavidDavis https://t.co/rLn9txYykI

I know @DavidDavisMP to be someone of integrity. If he says plan of @theresa_may is unworkable I believe him: not just rhetoric. Where is @BorisJohnson? In hiding?

I will shortly be delivering this letter to 10 Downing St calling on Mrs May to resign. She has to go. pic.twitter.com/rSrLpmr1nZ

The 1922 committee of backbench Conservative MPs is meeting in Westminster on July 9. Its purpose is to give the Tory backbenchers an opportunity to air their concerns, report on constituency work and coordinate legislative agendas. The committee organizes and votes on leadership challenges, which is initiated with a call for the vote of no confidence. When 15% of Tory MPs write a letter to the Committee chairman — currently Graham Brady MP — the vote of no confidence is triggered.

Sources confirm letters calling for vote of confidence in @theresa_may leadership going in to @Graham__Brady, chair of 1922. Tory Brexiters very unhappy — accuse PM of traducing those who voted to leave EU. This appears to be spontaneous, not coralled by ERG & @Jacob_Rees_Mogg

Mrs. May will have to face the vote, if lack of trust among her own MPs pushes them to question her leadership via the committee framework.

On Friday, July 6, Mrs. May Cabinet met at her summer residence and finalized a plan for future trade ties with the European bloc. The government is seeking to keep a free-trade zone for goods, commit Britain to maintaining the same rules as the bloc for goods and agricultural products and end freedom of movement between UK and the EU.

READ MORE: Here's What the UK's Fresh Brexit Deal is All About