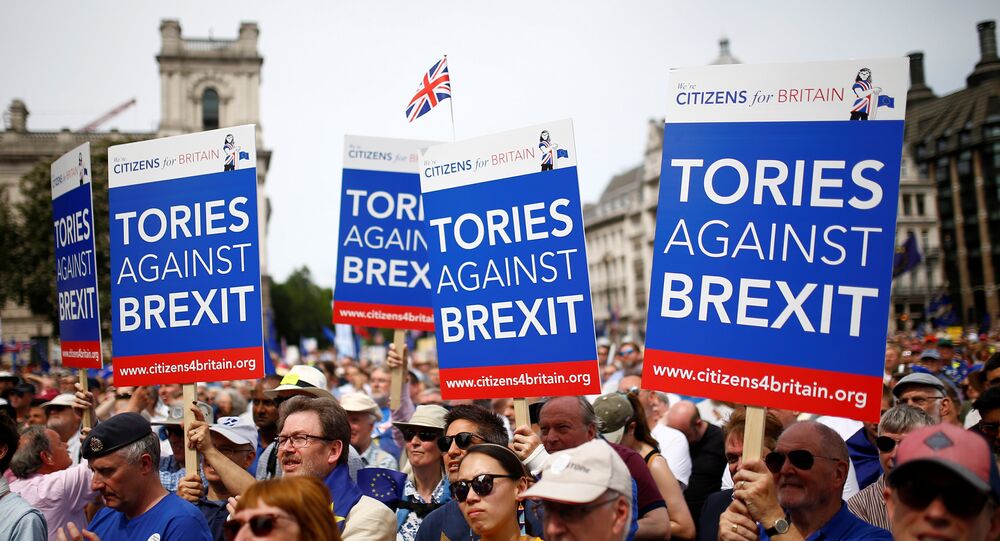 Ex-UK Cabinet Members to PM May: Brace Yourself for 'No Deal' Brexit

Thousands of people have marched through London on the second anniversary of the UK referendum on the country's exit from the EU, demanding a new vote related to the Brexit deal's terms.

Sixty pro-Brexit former cabinet ministers, lawmakers, economists and business leaders have urged UK authorities "to accelerate their preparations for 'no deal' [Brexit] and a move to a World Trade Deal under WTO rules."

In an open letter, they made it plain that Prime Minister Theresa May should to be ready to withdraw the UK from the EU without clinching a trade agreement, in the face of warnings that the "no-deal" Brexit would lead to an economic catastrophe.

"Britain is a great champion of free trade and looks forward to striking free trade deals with countries beyond the shores of the continent, once Brexit has taken effect," the letter read.

The authors of the letter also insisted that the UK should exert pressure on Brussels by threatening to withhold a 39 billion pound (2 billion dollar) divorce bill it has already agreed to pay.

READ MORE: If We Have No Brexit Deal, It Will Be a Serious Crisis — UK Lawmaker

The letter came after more than 100,000 people took part in the UK Unity and Freedom march in London to mark two years since the historic Brexit referendum on Britain's withdrawal from the EU.

© AFP 2021 / PAUL FAITH
No Brexit Deal if UK Doesn't Follow Through on Border Commitments - Dublin
The march took place amid UK Foreign Secretary Boris Johnson's calls to ensure a "full British Brexit", following Cabinet warnings that the UK could walk away from the talks with Brussels without a deal.

The Brexit talks officially kicked off in June 2017 and are slated to be completed by the end of March 2019. A transition period, which stipulates Britain remaining in the single market and customs union, is expected to last until the end of 2020.