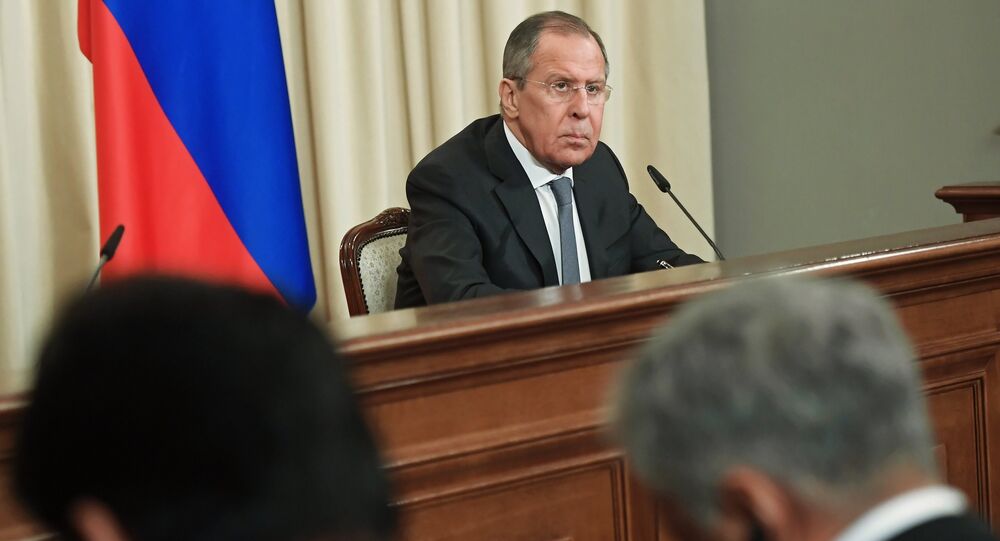 Commenting on the recent diplomatic standoff between some Western countries and Moscow over the Skripal case, Russian Foreign Minister Sergei Lavrov noted that the situation is even worse than during the Cold War.

"When they say that the order came from the very top, then, firstly, President Putin personally commented on this situation and said that only a completely biased person, a person who started a terrible, insane provocation, can insist on that Russia had a motive. As it is done by our British colleagues. What was our motive? On the eve of presidential elections, on the eve of the World Cup in football? This is a cynical point of view to treat this problem," the Foreign Minister told a press conference after his meeting with his Bangladeshi colleague.

In the time of the Cold War there were some rules, but now Britain and the United States have dropped all propriety and are playing children's games, he stated during a news briefing.

According to Lavrov, the question of how far mutual deportations of diplomats can go does not depend on Russia, the West should stop first.

"How far we go, does not depend on us. In diplomacy there is a principle of reciprocity, nobody canceled it. This principle will be applied consistently… We do not want to play children's games, as our partners are exactly doing," said Lavrov.

The minister explained that Russia didn't have any motive for poisoning Sergei Skripal and his daughter.

"The man was released, was pardoned in exchange for the representatives of Russia a few years ago. And if there were any claims on this person, he probably would not be subject to an exchange… I hope that Sergei Skripal will follow the example (of his daughter Yulia Skripal, who earlier came out of a coma), because, apparently, he and his daughter were roughly equally affected by the incident that took place," he said.

He went on by hinting what forces could benefit from Skripal poisoning.

"Now our Western partners, I mean primarily the United Kingdom, the United States and several countries that have blindly followed them, have run out of niceties, resorting to open lies, to outright misinformation. We will respond to this fairly calmly, coolly, and insist that any accusations, any allegations must be justified by facts," Sergei Lavrov said.

The reasons behind the incident may lead to different services, according to Lavrov.

"There are other explanations besides the ones our Western colleagues talk about, stating that only a Russian trace may be adopted as a final decision. (For example), experts say that it can be quite beneficial to the British intelligence services, which are known for their ability to act with a license to kill. This may be beneficial to the British government, which has clearly turned out to be in an uncomfortable situation, failing to fulfill the promises to its constituents about the conditions under which they will provide Brexit (Britain's withdrawal from the EU)," he emphasized.

If London fails to answer Russia's questions on the Skripal case at the upcoming meeting of the Organization for the Prohibition of Chemical Weapons (OPCW) Executive Council, it will mean that the entire incident was a provocation, Russian Foreign Minister Sergei Lavrov emphasized.

"There are many questions, and the inability of our UK colleagues to answer them will mean only one thing — that this is all a fiction, and more specifically, a gross provocation," Lavrov told the press conference.

The Russian Ministry of Foreign Affairs is very interested on what basis France joined the Salisbury incident investigation, said Lavrov.

"We have strictly distributed specific questions in full compliance with the Convention on the Prohibition of Chemical Weapons. The questions are addressed to the technical secretariat of the OPCW, and to our British colleagues and to our French colleagues because suddenly some reports have appeared and President Macron had said that France was actively involved in the investigation," Sergei Lavrov noted.

Earlier, Lavrov said that Russia had officially proposed to convene an extraordinary session of the OPCW Executive Council on April 4 to have a "frank conversation" and establish the truth about the poisoning of former Russian intelligence officer Sergei Skripal and his daughter in the UK town of Salisbury.

© REUTERS / Peter Nicholls
Russian Envoy to US: Skripal Case Pretext to Launch Long-Planned Smear Campaign
Relations between the countries have seriously deteriorated due to the exposure of what UK experts say is the A234 nerve agent, which former Russian intelligence officer Sergei Skripal, who also worked for UK intelligence, and his daughter Yulia suffered from. The incident has resulted in numerous Western countries expelling Russian diplomats in solidarity with the UK which blamed Russia for the poisoning attack. Moscow has repeatedly denied the accusations and answered in a tit-for-tat manner, expelling foreign diplomats from the country.

Each unfriendly move taken against Russia is thoroughly investigated by Moscow, possible closure of the Russian trade mission in London will not be left unanswered, Kremlin spokesman Dmitry Peskov stated.

"Moscow analyzes each unfriendly step that is being taken against Russia, and each this unfriendly step is subsequently given a response, which is formulated accordingly. So let's not get ahead of ourselves. Moscow will not leave unaddressed such steps," Peskov told reporters.

When asked to comment on media reports that Kremlin had allegedly approved the use of the nerve agent to poison Skripal, Peskov reiterated that Russia has nothing to do with this incident.

"Read all the statements of Foreign Minister [Sergey] Lavrov, my counterpart in the Foreign Ministry [spokesperson Maria] Zakharova, your humble servant… from the very beginning we been have officially declared at different levels that Russia has nothing to do with the Skripal case," Peskov stressed.

On Friday, the Telegraph newspaper reported citing sources that the UK government would consider the closure of the Russian diplomatic mission in north London in connection with the poisoning of former Russian intelligence officer Sergei Skripal and his daughter in the UK city of Salisbury.

The United States is trying to isolate areas on the eastern bank of the Euphrates River in Syria, establishing military facilities and power bases there, Russian Foreign Minister Sergei Lavrov said.

"We are especially worried that, despite repeated assurances that the US' only goal in Syria is the fight against terrorism, in recent months we have seen the US seriously basing itself on the eastern bank of the Euphrates, on a large part of Syrian territory right up to the border with Iraq," Lavrov noted.

According to Lavrov, Trump's latest statements mean that "he, at least, is committed to the previous statements that after the victory over Daesh*, the United States will leave Syria."

"And they [the US]… are also establishing power bases there, which are loyal to them, accountable, which will be financed by them, and all that in the context of isolating these areas from the rest of the Syrian territory," he said.

Earlier, President Trump, speaking in Ohio, once again said that the US will leave Syria "very soon" and "let others take care of this" (the situation in Syria). Such statements were made by the president during the pre-election campaign, however, US servicemen are still in Syria without the official permission of Damascus.