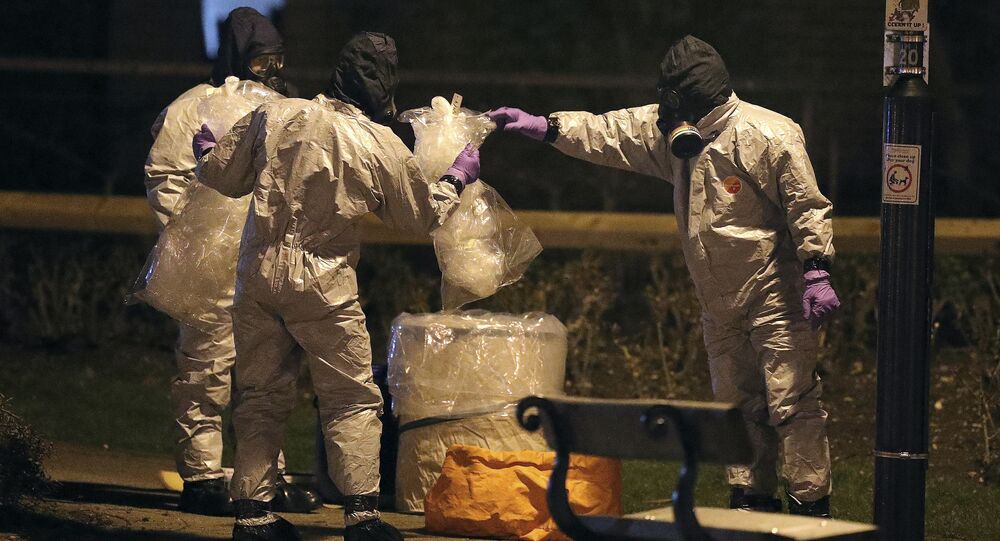 Moscow has repeatedly demanded that London should abide by the Convention on the Prohibition of Chemical Weapons and provide Russia with access to the samples of the nerve-agent which was allegedly used to poison Sergei Skripal and his daughter.

The UK Court of Protection has given permission for blood samples of former Russian spy Sergei Skripal and his daughter Yulia, who were poisoned in Salisbury, to be taken for testing by the Organisation for the Prohibition of Chemical Weapons.

On March 14, the UK envoy to the UN Security Council announced that the United Kingdom had asked the OPCW to independently verify its findings in the nerve agent attack against Skripal. On Monday, the OPCW experts arrived in the United Kingdom for the investigation.

© REUTERS / Henry Nicholls
Media Reports Second UK Policeman 'in Hospital' After Skripal Poisoning
The Russian Foreign Ministry requested the UK Foreign Office to allow a joint investigation into the case. Foreign Minister Sergei Lavrov demanded that Moscow should receive access to all the facts and documents connected with the investigation, since one of the victims is Yulia Skripal, a Russian citizen. The minister also stressed that the UK's obligations under the Convention on the Prohibition of Chemical Weapons imply that if there are any suspicions that a poisonous substance prohibited by the Convention was used, then the state suspected of producing it needs to be contacted, since this state has the right to receive access to the substance in order to analyze it on its own. However, Moscow has not received any requests of this kind from London.

The UK Foreign Office said that the country was acting in compliance with the regulations of the Organization for the Prohibition of Chemical Weapons (OPCW), which does not require it to share samples of the nerve agent with Russia.

The British court says that Sergei Skripal and his daughter Yulia are in physically stable condition and both being treated on the basis that they would wish to be kept alive and to achieve optimal recovery. Concerning the pace of recovery it is impossible to say when they will "regain capacity," according to the court.

British court judgement also added that blood samples from Skripals were tested by the UK's Porton Down lab, testing positive for presence of A-234 nerve agent or a substanceof a related class.

Ex-Russian intelligence officer Sergei Skripal and his daughter Yulia were found unconscious earlier in March on a bench at a shopping center in Salisbury. Both of them remain in critical condition and are being treated for exposure to a chemical.

UK Prime Minister Theresa May has accused Russia of orchestrating the attack on the former intelligence officer and expelled 23 Russian diplomats as a punitive measure.