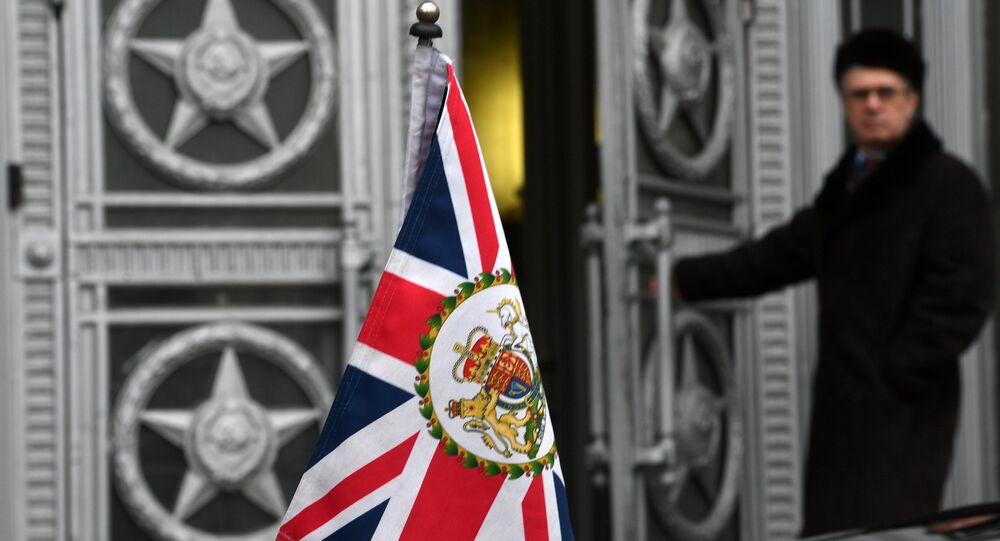 Moscow has found its way to respond to the recent UK move to expel Russian diplomats within the Skripal poisoning case.

The Russian Foreign Ministry declared on Saturday 23 employees of the UK Embassy in Moscow personae non gratae in response to the similar move made by London, the ministry said in a statement.

"A total of 23 diplomatic employees of the UK Embassy in Moscow are declared personae non gratae and must leave [Russia] within a week," the statement read.

© REUTERS / Peter Nicholls
UK's 'Spying Industry' Is Main Beneficiary of Skripal Incident - Analyst
The ministry also revoked its agreement on opening and operation of the UK Consulate General in the Russian city of St. Petersburg, according to the statement. A source in the ministry told Sputnik that the UK side would get the necessary time for closing the facility.

In addition, according to the statement, the activity of the British Council in Russia had been suspended over the lack of proper regulation, regarding its status.

"Since the legal status of the British Council in Russia has not been determined its operation is ceased," the statement read.

The Foreign Ministry added that Moscow retained right to respond if the United Kingdom continued to take unfriendly steps against Russia.

The decision comes after earlier in the day the Russian Foreign Ministry summoned UK Ambassador to Russia Laurie Bristow.

"The most likely source of origin of this chemical are countries, which have been developing intensive researches of chemicals from the 'Novichok' project since late 1990s and until today… These countries are the United Kingdom, Slovakia, the Czech Republic, Sweden. There are also questions about the United States," Zakharova told the Rossiya 24 broadcaster.

"If the UK prime minister and other UK experts, who are working on that, will provide a formula [of the used chemical], it will become clear, which countries were developing the corresponding substances," the spokeswoman added explaining London's refusal to disclose the formula.

At the same time, the UK Foreign Office said Saturday that the country's National Security Council would meet next week to consider next steps following Moscow's decision to expel 23 UK diplomats from Russia and cease the operation of the British Council in Russia.

"In light of Russia's previous behavior, we anticipated a response of this kind and the National Security Council will meet early next week to consider next steps. Our priority today is looking after our staff in Russia and assisting those that will return to the UK," the Foreign Office said.

"We have no disagreement with the people of Russia and we continue to believe it is not on our national interest to break off all dialogue between our countries but the onus remains on the Russian state to account for their actions and to comply with their international obligation" the Foreign Office added.

At the same time, the British Council has expressed disappointment over the cessation of its activities in Russia.

"We are deeply disappointed by such development of actions. We think that when political and diplomatic relations become difficult, cultural and educational relations have a vital role in keeping a permanent dialogue between people and organizations," the council's statement reads.

Scotland Yard on the Course of the Investigation

Commenting on the Skripal poisoning, the Metropolitan Police Service said Saturday that the investigation in the case will take weeks, if not months.

"To date, detectives have recovered 762 exhibits and are trawling through around 4,000 hours of CCTV. They are making good progress in what is a painstaking investigation that is likely to be ongoing for weeks, if not months," Met Assistant Commissioner Neil Basu said.

The Metropolitan Police called on witnesses of Skripal' and his daughter' activities on the day of the incident to report to police.

"In any investigation, the information we receive from the public can be crucial to helping the police build a picture of events and in this case the public response has been immense. Around 400 witnesses have already given statements, with hundreds more to be taken in the coming days," Basu said.

He also pointed out that a lot of officers were deployed to carry out the investigation.

"This is an extremely challenging and complex investigation and we currently have around 250 exceptionally experienced and dedicated specialist officers from the counter-terrorism network working around the clock on this case. They are being supported by hundreds more officers from across the police family, as well as the military and other emergency services," Basu added.

Relations between Russia and the UK deteriorated in two recent weeks after former Russian intelligence officer Sergei Skripal and his daughter were found unconscious in a shopping center in Salisbury.

Following the incident, UK Prime Minister Theresa May said that it was "highly likely" that Russia was responsible for the incident since the two were poisoned with a Novichok class military-grade nerve agent that was developed in the Soviet Union.