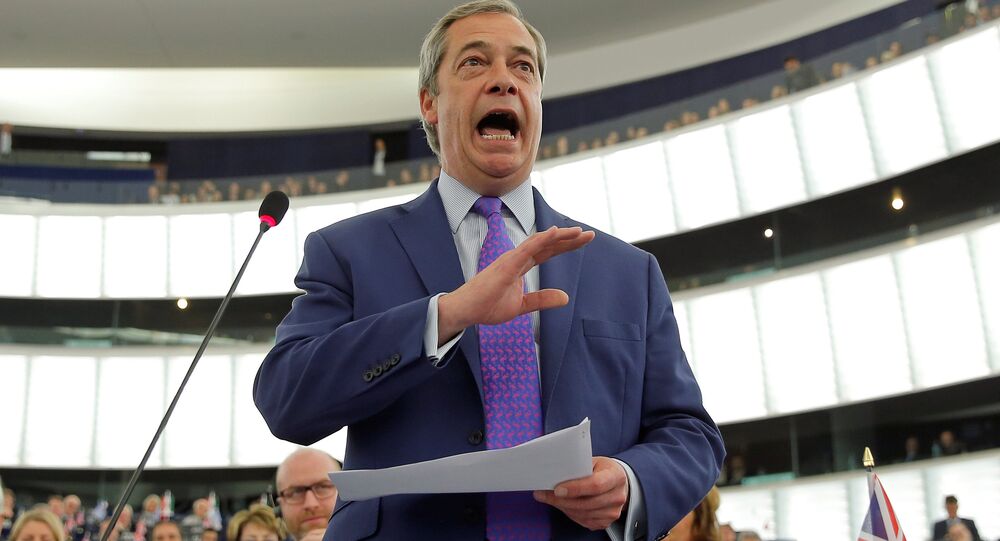 Former leader of the UK Independence Party (UKIP) Nigel Farage called on British Prime Minister Theresa May to stand up to the European Union, and criticized the economic union's double standards regarding trade protectionism.

He once again urged the UK government to faithfully and properly negotiate Britain’s exit from the EU, including its customs union.

Theresa May should take @realDonaldTrump's lead and stand up to the unelected European Commission bullies at next week's EU summit. pic.twitter.com/1uRPsTCxCS

He went on to defend US President Donald Trump’s trade protectionist policies, arguing that the EU has its own import tariffs applied on all exports into the union.

"The EU’s bullying us, it bullies member states, it bullies its next-door neighbors, it even bullies the third world with its neo-colonial policies. Well of course it does because the Europe of the Junckers, the Barniers, the Selmayrs is power without accountability. Well at long last you’ve met your match in Donald Trump. Now you may well scream and shout about his aluminum and steel tariffs but the EU puts tariffs on 13,000 goods coming into it, meaning that shoes and bras and food are more expensive," Mr. Farage added.

The European Union, wonderful countries who treat the U.S. very badly on trade, are complaining about the tariffs on Steel & Aluminum. If they drop their horrific barriers & tariffs on U.S. products going in, we will likewise drop ours. Big Deficit. If not, we Tax Cars etc. FAIR!

Nigel Farage served as the leader of UKIP for around 10 years, before resigning in 2016, shortly after the Brexit referendum. He has continued to serve as a Member of the European Parliament (MEP) and regularly voices his views on UK affairs, especially Brexit negotiations.