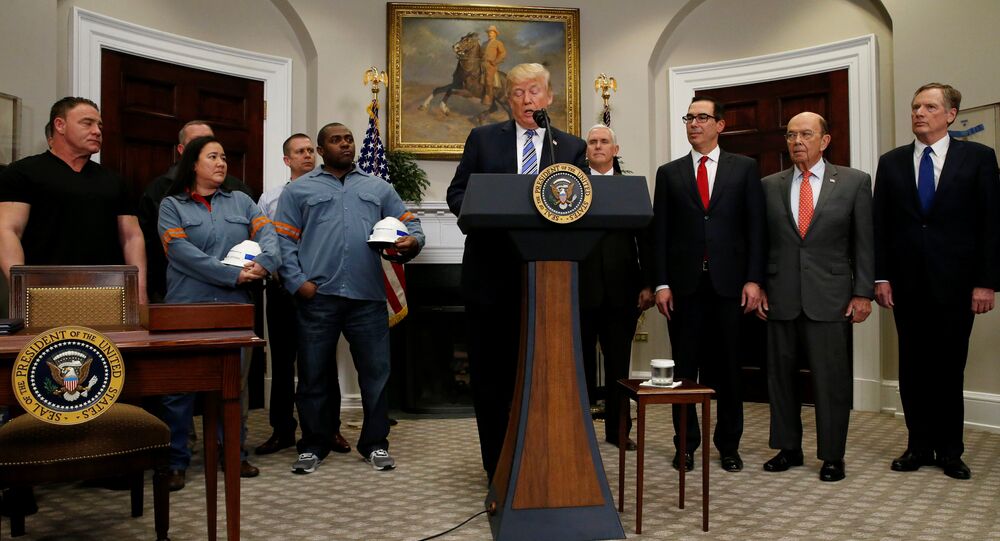 Kay Gottschalk, a member of the German Bundestag, who also serves as the AfD party’s deputy spokesman, defended Trump’s import tariffs, while describing his strategy as "clever."

"The EU Commission is shouting loudly because Trump charges punitive tariffs. It raises itself as the grail-keeper of free world trade, defending indirectly the abominable consequences of globalization: pollution, wage dumping and tax avoidance of large corporations. Trump's clever strategy is obvious. He destroys existing contracts so that he can replace them with new and better ones," Mr. Gottschalk was quoted as saying by an official AfD press release.

READ MORE: US Tariffs: 'Trump Bluffs a Lot, Uses That as Strategy to Make Deal' — Scholar

Deputy spokesman Kay Gottschalk went on to suggest that Trump levied the tariffs in response to the EU’s own trade protectionist policies – such as the tariffs imposed on all foreign exports into the economic union – and may consider exempting the EU if they also exempt US exports from tariffs.

"The truth is that the EU has created insurmountable hurdles for the export of foreign nations, such as Africa, South America and the United States. Before you judge Trump, you should have the courage to question your own decisions as critically as those of others," Mr. Gottschalk concluded.

Just hours after the AfD published the press release featuring comment from Mr. Gottschalk, his theory was proven correct, with President Trump tweeting that he would drop the tariffs if the EU and other trade partners also "drop their horrific barriers and tariffs on US products."

The European Union, wonderful countries who treat the U.S. very badly on trade, are complaining about the tariffs on Steel & Aluminum. If they drop their horrific barriers & tariffs on U.S. products going in, we will likewise drop ours. Big Deficit. If not, we Tax Cars etc. FAIR!

So far, Trump has only exempted Canada and Mexico from the metal tariffs, which are currently levied at a 25 percent rate for steel imports and a 10 percent rate for aluminum imports. He also suggested that an exemption will soon be issued to Australia.