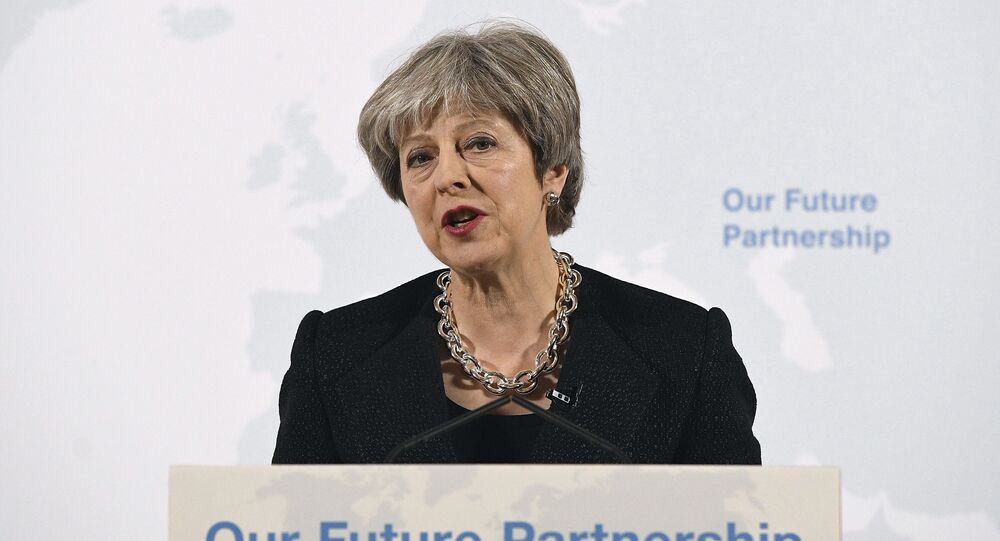 Brussels has released a 120-page draft document setting out the blueprint for Britain’s exit from and future relationship with the European Union.

British Prime Minister Theresa May has responded to the EU’s draft vision for Brexit in a speech setting out five conditions that must be met in order for the process to be considered a success for the United Kingdom.

Mrs. May reiterated her desire to for Europe and Britain to maintain closely entwined relationships, saying of the June 2016 EU Membership Referendum “It was not a vote for a distant relationship with our neighbours.”

© AP Photo / Vianney Le Caer
Jeremy Corbyn's Brexit Balancing Act
However she also emphasized that the Leave result meant that the UK could not maintain its current membership of Europe’s most important institutions, namely the Customs Union in which the EU’s member states negotiate trade agreements collectively with other parts of the world, the Single Market which governs the internal economic policies of member states on matters such as industry subsidies and the European Court of Justice, according to which the whole of the European Union operates as a single legal jurisdiction.

The PM laid out her intention to withdraw the UK from all of these institutions in her 2017 Lancaster House Speech, which she has been under considerable pressure from her own party to stick to.

The Prime Minister also outlined that the final outcome of the negotiations between London and Brussels must be permanent and could not be subject to renegotiation.

“After Brexit both the UK and the EU want to forge ahead with building a better future for our people, not finding ourselves back at the negotiating table because things have broken down.”

Of greatest concern to the Government is the status of its future trading relationship, which Mrs May spoke of her desire to maintain despite insisting that Britain would not remain inside the Customs Union. She suggested however that a new customs relationship could be forged with the Continent whereby import and export standards between the two sides could be kept in so-called “regulatory alignment,” so as to minimize any future trade obstacles. May also expressed a willingness to keep the UK within certain EU-affiliated industry bodies such as chemicals, aviation and pharmaceuticals.

Despite the perception of Britain turning its back on Europe, the Prime Minister claimed that Brexit must be consistent with the country's self-image as, "a modern, outward looking European democracy" that celebrates its history and the diversity of its people. Recent polling has however shown a significant amount of public support across all parts of the UK for curbing immigration and particularly ending the free movement of people that is a condition of EU membership.

"Nor is Brexit an end in itself. Rather, it must be the means by which we reaffirm Britain's place in the world and renew the ties that bind us here at home," she said.

The most politically dangerous consequence of the Brexit process for the Prime Minister, is the threat it could pose to the integrity of the United Kingdom itself. The December joint-report in which the two sides agreed to proceed to the second stage of trade negotiations would almost sunk by the Conservatives coalition partners, the DUP, who feared that a special relationship between the EU and Northern Ireland in order to maintain a frictionless border could weaken the institutional links between Belfast and the rest of Great Britain. London has also rejected demands from the Scottish Government, which is vehemently opposed to Brexit, that Scotland be allowed to remain a member of the Single Market.