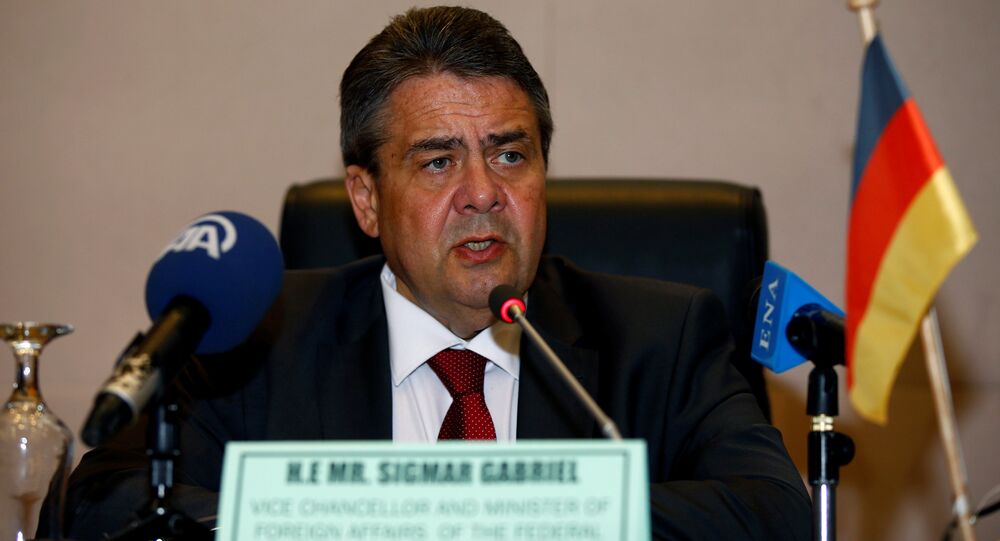 German Foreign Minister Sigmar Gabriel is delivering a speech on the sidelined of the 2018 Security Conference in Munich, which gathered about 500 high-ranking politicians, as well as military officials and experts.

Gabriel called anti-Russian sanctions "ambiguous," as they adversely affect other countries as well.

The minister added that gradual lifting of the imposed sanctions could start after deployment of the UN peacekeepers in Donbass. He also stressed that to insist on full implementation of the Minsk peace agreements before offering some sanctions relief to Russia is "not realistic."

Gabriel has repeatedly called for loosening of sanction pressure on Russia in case of successful implementation of the initiative on the deployment of UN peacekeepers to eastern Ukraine. However, the general European stance on the issue is that the bloc does not link the deployment of UN peacekeepers in eastern Ukraine to the gradual lifting of sanctions against Russia.

© Sputnik / Alexey Vitvitsky
Belgium Interested in Economic Cooperation With Russia Amid Sanctions - FM
In early September, Russian President Vladimir Putin expressed his support for the idea of sending lightly armed peacekeepers to Ukraine in order to ensure the security of the Organization for Security and Co-operation in Europe (OSCE) observer mission in Donbass. He stressed that the peacekeepers should operate only along the front line. However, Kyiv insisted that the mission should patrol the whole conflict zone including the Ukrainian-Russian border.

The EU introduced anti-Russian sanctions after the start of the Ukrainian crisis and Crimea's reunification Russia in spring 2014. Western countries claim Russia has been meddling in Ukrainian internal affairs. Moscow, in its turn, denies this allegation, stressing that the referendum in Crimea was conducted in compliance with international law.

© Sputnik / Grigoriy Sisoev
Gazprom Neft Unaffected by US Oracle Sanctions Against Russian Oil Sector - CEO
The punitive measures limit Russia's access to EU financial markets and target the country's financial, energy and defense industries. Russia has responded by introducing a food embargo on countries that targeted it with restrictions, warning that the West's sanctions are counterproductive.

Since the introduction of the sanctions, the EU has been prolonging them every six months. In March 2015, EU leaders made a decision to link the sanctions regime to the implementation of the Minsk agreements. Since then the economic sanctions were extended for 6 months twice a year after an assessment of the progress in the Minsk accords. However, Moscow is a guarantor of the Minsk agreements, but not the side of the conflict in Ukraine, thus Russia cannot implement measures enshrined in the document, according to Kremlin's spokesperson Dmitry Peskov.