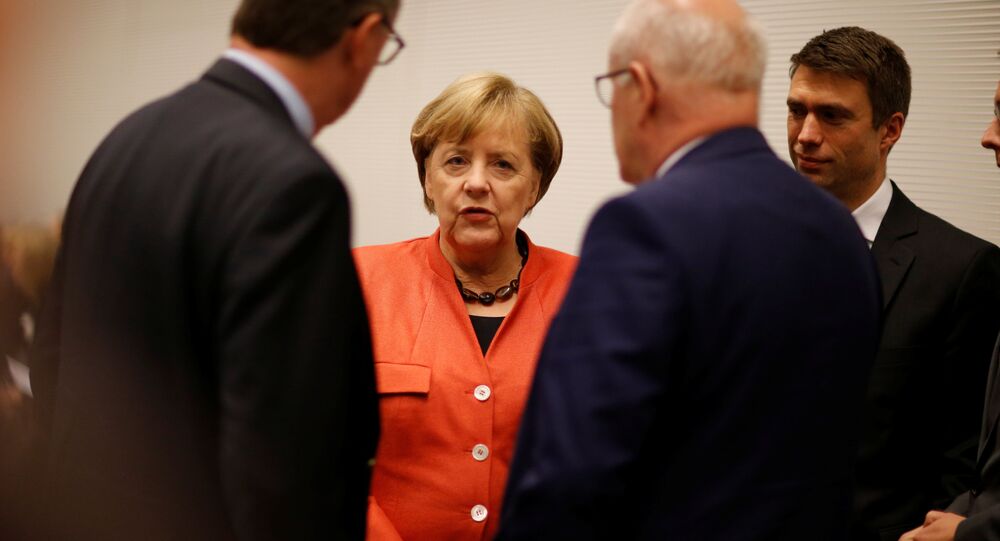 Germany's Social Democratic Party (SPD) has softened its stance on a potential coalition with Angela Merkel's CDU/CSU bloc; Angela Merkel's allies have welcomed the decision but are facing a long list of demands which the SPD wants to implement in return for keeping Merkel in power.

The Christian Democratic Union/Christian Social Union (CDU/CSU) led by Angela Merkel wants to form another grand coalition with the Social Democratic Party (SPD). However, the latter wants to implement several measures from its pre-election manifesto which run counter to the center-right political philosophy of Merkel's party.

The Sueddeutsche Zeitung reports that an influential branch of the party in the state of North Rhine-Westphalia has written to the party leadership outlining a "basis for talks" with the Chancellor about forming a new government.

© AP Photo / Bernd von Jutrczenka/dpa
Merkel's Future Hangs in the Balance as Half of Germans Favor Election Rerun
According to the letter, sent to SPD party leader Martin Schulz, who began his political career in North Rhine-Westphalia, and the leader of the SPD in the Bundestag Andrea Nahles, the SPD regards Merkel's party "with great distrust" because it "broke its word many times" during their coalition in the last parliament.

However, with Germany facing a political crisis after the breakdown of coalition talks between the CDU/CSU, the Free Democratic Party (FDP) and the Greens, the SPD must deal with the situation "responsibly."

In the immediate aftermath of the elections on September 24, when both the CDU/CSU and the SPD suffered their worst election results since the 1940s, Schulz announced that his party would spend the next parliament in opposition.

However, under pressure from MP's in favor of a deal, Schulz ended his categorical opposition on Friday, announcing that he is willing to engage in talks with the CDU/CSU on forming "any form and any constellation" of government and then put the final decision to party members.

On Thursday, Schulz is slated to meet with Bundestag President Frank-Walter Steinmeier, CDU leader Merkel and leader of its Bavarian sister party, the CSU, Horst Seehofer.

Seehofer told Bild am Sonntag that he "welcomes the readiness" of the SPD to enter talks, but warned the party to "remain realistic. There must not be a Grand Coalition at any price."

© REUTERS / Mediengruppe RTL Deutschland
A screen that shows the TV debate between German Chancellor Angela Merkel of the Christian Democratic Union (CDU) and her challenger Germany's Social Democratic Party SPD candidate for chancellor Martin Schulz in Berlin, Germany, September 3, 2017.
"An alliance between the Union and the SPD is the best option for Germany — better than Jamaica, new elections or a minority government," the CSU leader said.

In the immediate aftermath of the collapse of negotiations to form a so-called Jamaica Coalition, named after the colors of the four parties, Merkel had said she would prefer new elections rather than an "unstable" minority government.

However, it appears that leading figures in the CDU and CSU have turned away from the idea of holding new elections. In a speech to party members in Mecklenburg-Vorpommern on Saturday, Merkel said, "The people have voted. I do not believe that if we can't start [working] with the result, we should ask people to vote again."

© REUTERS / Axel Schmidt
'High Stakes Poker': Nerves Abound in Europe After German Coalition Talks Fail
After four hours of talks with leading CDU politicians on Sunday in Berlin, the Prime Minister of Schleswig-Holstein Daniel Guenther said that the CDU "firmly intends that there be an effective government," which is constituted by a "grand coalition," not a minority government.

However, the SPD is drawing up a lengthy list of demands in return for agreeing to a coalition, according to the Sueddeutsche Zeitung. The party will seek concessions in several areas including higher pensions and changes to the tax system. The party's plans for income tax reform would "relieve lower- and middle-income families" and impose "significantly higher" taxes on large assets.

Higher taxes for the rich, as well as a higher inheritance tax, would be used to pay "for education, communities and housing." In addition, the party will seek to end "two-tier medicine" and implement a system of universal health insurance.

The SPD performed poorly in September's federal elections; it received just 20.5% of the popular vote, trailing Merkel's CDU/CSU by 12.4%. The poor performance, coupled with his stated opposition to a coalition with Merkel, has led to rumors that Schulz will stand down as SPD leader rather than serve in a Merkel government.

It’s looking increasingly likely that @spdde’s Martin Schulz will step down in the next hours, #SPD sources are saying

Hearing word from within the SPD that Martin Schulz may resign today.

​Foreign Minister Sigmar Gabriel, who stepped aside as SPD leader in January in favor of Schulz, said that he would rather see his predecessor at the foreign ministry, Frank-Walter Steinmeier, as Chancellor.

"Friend, enemy, party colleague? Gabriel wants Steinmeier, not Schulz as chancellor. Did he ever want Schulz? This helps nothing: the #SPD must be renewed​," German MEP Fabio De Masi of the Left Party tweeted.

"But he is federal president now," Gabriel said ruefully, at a media event organized by Die Zeit newspaper in Hamburg on Sunday.

The German president has won praise for his decisive attempts to resolve the political crisis, calling on political parties to take responsibility and work harder to reach a compromise government. Steinmeier, who was defeated by Merkel as SPD candidate for chancellor in 2009, will host the leaders of the SPD and CDU/CSU for coalition talks on Thursday.