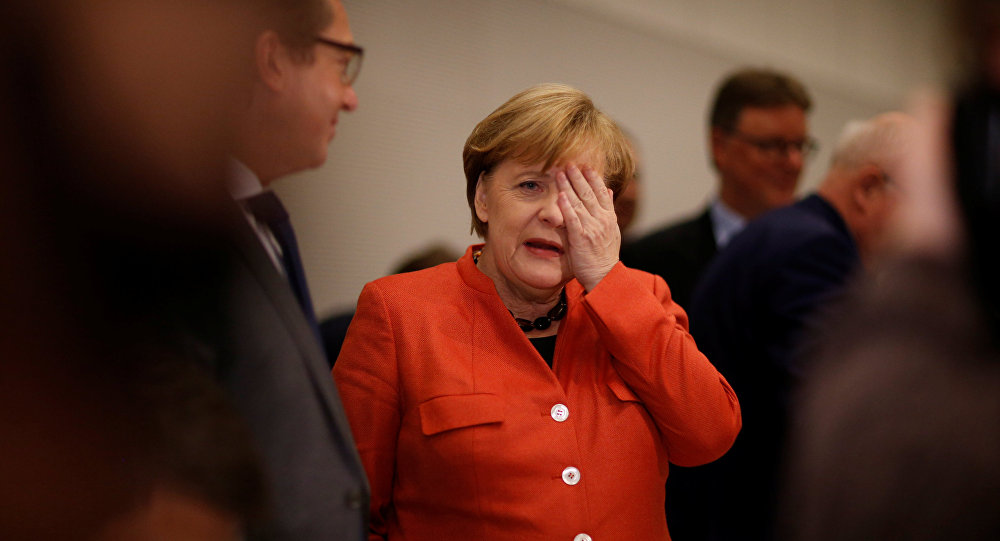 For the past couple of days, Germany has experienced an unprecedented level of political turmoil that has seen the collapse of Angela Merkel's efforts to form a ruling coalitional government, even putting the Iron Frau's fourth term as Chancellor at risk.

Following the general elections in late September this year, Merkel's Christian Democratic Union (CDU) was rocked by the worst electoral performance in its history, though the Party still received the largest share of seats in the German parliament.

However, even when combined with their traditional Bavarian partners, the Christian Social Union (CSU), the CDU is unable to attain a majority in the Bundestag and so must now search for new partners to form a coalition.

Although Germany has a well-established history of coalitional governments, this time Merkel is facing a backlash from other parties, as the long-standing Chancellor seems to be unable to overcome major ideological and practical obstacles in her efforts to form a government.

© REUTERS / Axel Schmidt
Failure of Jamaica Coalition Talks Threatens to End 'Era of Merkel'
With a number of parties rebelling against Merkel and obstructing her desperate attempts to secure her fourth term as Germany's Chancellor, Sputnik seeks to provide some clarification on the key players in the current political turmoil, explaining the essence of their conflict with Merkel's CDU and what they stand to win from the ongoing political crisis.

The Liberals: Rebels with a Cause

Having won 10.7% of the popular vote and controlling 80 seats in the Bundestag, the Federal Democratic Party (FDP) has become a strategically important political player and, despite its relatively small size, is able to stand up to larger parties in the German parliament, as they frantically search for coalitional partners.

Following the CDU's statement that it will not ally itself with the Left and the Alternative for Germany (AfD), the FDP was viewed as the key to Merkel's plans to establish a coalition and the two parties held negotiations for the past four weeks.

Yesterday, however, the FDP spectacularly left the coalitional talks, sparking the political crisis that German president Frank Walter Steinmeier described as a "situation unseen in decades."

The head of the FDP, Christian Lindner, cited the lack of common ground with the potential partners and unbridgeable ideological differences as main reasons for the party's withdrawal from the talks.

"We were chosen to change trends. That could not be achieved [at the coalition talks]," Lindner told the reporters on Monday.

"It is better not to govern than to govern in a wrong way," he added.

Even though the FDP positions itself as a liberal party, its social policy is often described as "center right" due to a strong stance on migration and allocation of benefits to refugees and asylum-seekers.

Apparently, Merkel's controversial policy toward migration, which saw over 1 million refugees entering Germany in 2015, was a major reason behind the FDP's withdrawal.

It is still unclear what the FDP stands to win from creating political chaos as they are ideologically remote from Germany's second largest party, the Socialists (SDP), and Merkel is unlikely to compromise on the migration issue due to demands of another coalitional partner, the Greens.

The Greens: Migration and Coal Wars

© AP Photo / Markus Schreiber
Looming Elections in Germany May Put Merkel in Jeopardy – Political Analyst
If the FDP is the "rock" then the Green Party is the "hard place" between which Merkel is caught.

The Greens control 63 seats in the Bundestag, having won 8.3% of the popular vote, and are as important to Merkel's efforts to secure a coalition as the FDP.

Unfortunately for the CDU's leader, they are also as ideological as their liberal partners.

The Greens strongly argue in favor of coal-power cuts that can jeopardize economic growth, the central pillar of Merkel's popularity.

Even more controversially, they aim to expand the existing social benefits for asylum-seekers, lifting restrictions on the refugee's family reunifications and relaxing migration quotas, paralyzing Merkel's attempts at compromise with the center right partners.

It is likely that by taking such a strong position the Greens seek to stir Merkel towards another "Grand Coalition" with the Socialist Party, whose political agenda is relatively similar to that of the Greens.

In an attempt to push the reluctant socialists towards an alliance with Merkel, Senior Greens member Juergen Trittin said:

"Germany needs a stable government and that is why the parliamentary majority is necessary".

"If the SPD continues to completely rule out the coalition, then I do not know how a minority government can be formed," Trittin told the ZDF.

The Socialists: Wait and See Tactics

The Socialist Party, however, is reluctant to repeat its electoral alliance with Merkel, having suffered considerable losses in the 2017 elections, where the SPD lost 40 parliamentary seats.

This Monday, Deputy Leader of the SPD Ralf Stegner reaffirmed his party's negative stance towards Grand Coalition with Merkel.

The party seeks to recover its diminished popularity by the ‘wait and see tactics', exposing the CDU's inability to form a working coalition, and potentially solidifying their position via new parliamentary elections.

And all Merkel’s fault because of her insane migrant policy.

If Merkel fails to find a viable solution to the on-going crisis, it is highly likely that the German President may dissolve the parliament and call for new elections.

Importantly, the would-be Chancellor conceded to this scenario on Monday, stating that she would prefer fresh elections to forming an ineffective minority government.

This may play right into the SPD's hands, as the party's leader, Martin Schulz said that the German electorate, should be given the chance to "reassess what is going on" following the failed talks, affirming that his party "does not fear" new elections, should they take place.

The Populists: "Merkel Out" 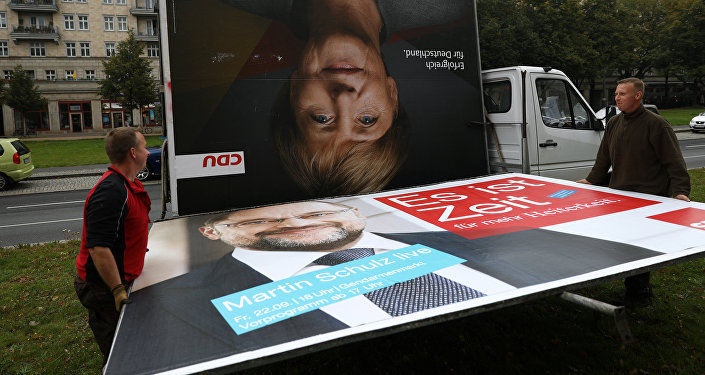 © REUTERS / Christian Mang
Germany Reacts to Historic Kicking Given to Main Parties in General Election
After their surprising success in September, the Alternative for Germany (AfD) became the third largest party in the parliament, securing 9 seats and 12.6% of the popular vote.

Consequently, the anti-immigration populist party played an indirect role in fostering the current political crisis, severely restricting Merkel's options to form a coalition, as she had made a promise not to ally herself with the AfD.

Although the party does not directly participate in the resolution of the political stalemate, it seized on the opportunity to double down on its calls for the Iron Frau to resign.

Speaking to Sputnik, senior AfD member Leif-Erik Holm said that the crisis ushers in the “end of the Merkel era.”

“To establish a Jamaican coalition was impossible, especially trying to unite its left and right wings- the Greens and the FDP”.

“Failure was inevitable”, he added.

Although Merkel remains the leader of the largest party and AfD remains the only party to overtly call for her resignation, it is not unreasonable to assume that the embattled leader may resign to revitalize the CDU and resolve the political backlash that has been paralyzing German politics for weeks.