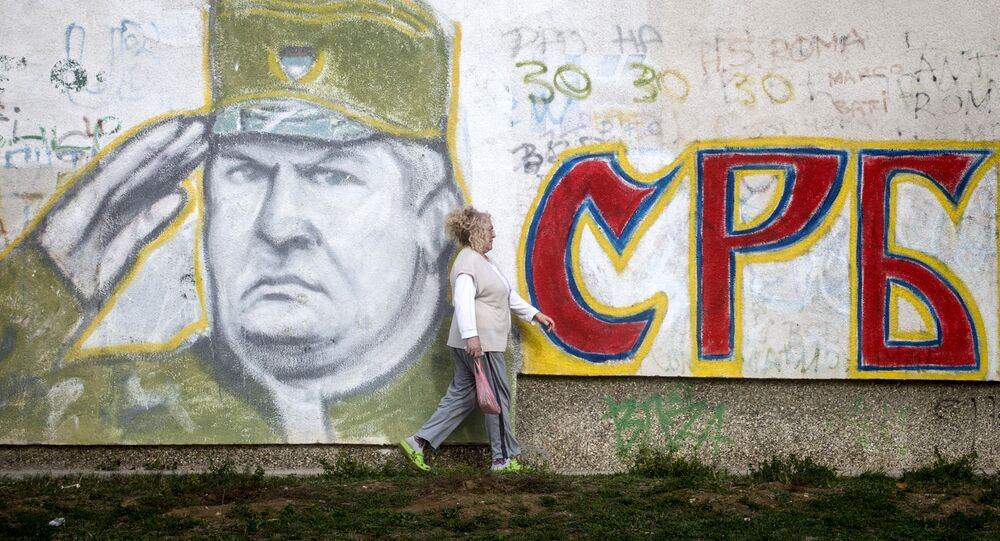 In a rare conviction by the International Criminal Tribunal for the Former Yugoslavia (ICTY), Ratko Mladic has been sentenced to life imprisonment for alleged war crimes. Most accused individuals have been exonerated by the controversial court - and its gallery of accused individuals features not a single member of NATO.

Ratko Mladic, the former commander of the Bosnian Serb Army has been sentenced to life imprisonment after being convicted of war crimes and crimes against humanity by the International Criminal Tribunal for the Former Yugoslavia.

Conviction by the ICTY is uncommon — since its establishment in 1993, it has indicted 161 individuals on war crimes charges, but secured a conviction against just 33 of them. Several of the highest profile accused have seen many charges against them dropped, and/or the cases against them collapse. Most notably, former Serbian President Slobodan Milosevic was exonerated by the ICTY — albeit posthumously.

Milosevic is dead. What next?
While barely acknowledged by the mainstream media, and buried deep in the Court's 2,590 page verdict in the trial of Bosnian Serb leader Radovan Karadzic, prosecutors acknowledged Milosevic had never agreed to a "common plan" to create territories ethnically cleansed of non-Serbs during the Bosnian War of 1992 to 1995.

In Aug 2016, Slobodan Milosevic was found innocent of war crimes. Funny how MSM got that wronghttps://t.co/YYrzOpITXt

They noted Milosevic had repeatedly criticized the policies and decisions made by Karadzic and the Bosnian Serb leadership, and demanded "all members of other nations and ethnicities"  be protected by security forces, stating discrimination was not in the Serbian national interest.

The ICTY's verdict nonetheless did not mention the testimony General Geza Farkas, former head of security in the Yugoslav army, who alleged all Yugoslav soldiers in Kosovo had been handed a document explaining international humanitarian law, and were ordered to disobey any orders which violated it — and Milosevic had ordered no paramilitary groups should be permitted to operate anywhere in Kosovo.

In essence, the ICTY's findings blew apart claims made before, during and after NATO's campaigns against Yugoslavia that Serbian military and political leaders had pursued a policy of genocide and the creation of a "Greater Serbia," and had killed hundreds of thousands in the process. The "Butcher of the Balkans" was, in fact, no butcher at all.

Mladic's exoneration on genocide charges is also further confirmation of what many academics and international criminal lawyers (including Ed Herman, David Peterson, Michael Parenti, Robin Philpot, John Philpot, Christopher Black, Peter Erlinder, Ramsey Clark, and Diana Johnstone) have long-claimed — claims about ethnic cleansing in the Yugoslav wars, and casualty figures in events such as the Srebrenica massacre, are highly questionable.

"What happened was not a genocide. There was a massacre of prisoners, whose proportions are disputed. That was a war crime. But it was not genocide. When your victims are military age men and you spare women and children, that cannot be genocide by any sensible definition," Johnstone said in a 2015 interview with Counterpunch.

© AP Photo / Andrej Cukic
'Soft Adulation': What is Behind NATO's About-Face on Serbia

Johnstone also suggested the ICTY was "set up to blame the Serbs for genocide," doing so via a "far-fetched sociological explanation" — because Bosnian Muslims had a patriarchal society, "killing the men would be a sort of genocide."

© REUTERS / Peter Dejong/Pool
Ex-Bosnian Serb Leader Mladic to Appeal UN Court's Ruling – Son
Such allegations were first debunked in September 2001, when a UN court officially ruled Serbian troops did not carry out genocide against ethnic Albanians in Kosovo during the 1990s. Nonetheless, the failure of Western forces to prevent such massacres has served as a justification for intervention ever since, most notably in Libya in 2011, and Syria in 2013.

The ICTY's lengthy cast of accused is also solely comprised of Serbian political and military figures. Other forces and elements in the former Yugoslavia potentially guilty of war crimes, and NATO itself, are not represented.

The absence of NATO figures from the lineup underlines the politicized nature of the prosecutions, as the military alliance has been accused of committing war crimes in the region throughout its campaign against the fallen country, most notably in Kosovo. Amnesty International notes there were many violations of the laws of war during the bloc's 74-day bombing campaign in 1999, with hundreds of civilian casualties (at least 30 percent of which were children) and the targeted destruction of civilian objects, including the bombing of Serbian radio and television headquarters in Belgrade.