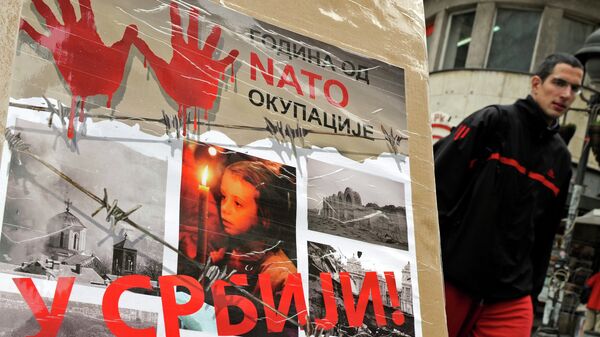 Russia has an interest in maintaining close ties with ex-Yugoslav Balkan states and maintaining their neutrality from the EU and NATO, head of a recently founded Serbian People's Party, Nenad Popovic told Sputnik.

A businessman who made much of his fortune through privatization in early 1990s Russia, Popovic turned his attention to Serbia in the 2000s, after the overthrow of Slobodan Milosevic. He went on to a leadership position in the Democratic Party of Serbia and became one of the chief negotiators on the Kosovo issue, attending high-profile meetings in Serbia, the United States and Albania.

"Today, between two-thirds and 85 percent of Serbian citizens oppose NATO membership, while the government considers the 'Partnership for Peace' program the highest possible level of cooperation with NATO," Popovic told Sputnik.

'Mafia State': Washington Turns Blind Eye to Organized Crime in Kosovo
He added that in Bosnia, the process is likewise stalled, Popovic said, as while the Bosnian and Croat politicians support the idea, it still requires the consent of the country's Serbs, who live in the Republika Srpska, which makes up 49 percent of the country's territory.

In Macedonia, only the separatism-minded Albanian minority supports accension to NATO, Popovic said, while Greece has blocked the organization from accepting the country because of a naming dispute.

"The situation with Montenegro even more clear. Montenegrins are traditionally sympathetic to Russia, while 40 percent of them identify themselves as Serbs and speak the Serbian language. But even among those who identify themselves as Montenegrins, many oppose joining NATO. The Montenegro regime stubbornly avoids the referendum, in which, obviously, the majority of Montenegrin citizens would vote for the country's military neutrality, and therefore, against joining NATO," Popovic added.

Russia has a good position in former Yugoslavia, according to Popovic, ecause it supports the territorial integrity of Montenegro and Macedonia, while also supporting the current sovereign status of Bosnia.

As for the South Stream project, the European Union blocked it on selfish grounds, according to Popovic, fearing an "expansion of Russian political influence," something that, he says, Russia must do to strengthen the Balkan states' neutrality.

He added that while Serbia should have closer ties with EU members, it would not be rational for Serbia to join the bloc when Russia remains its close and natural ally.