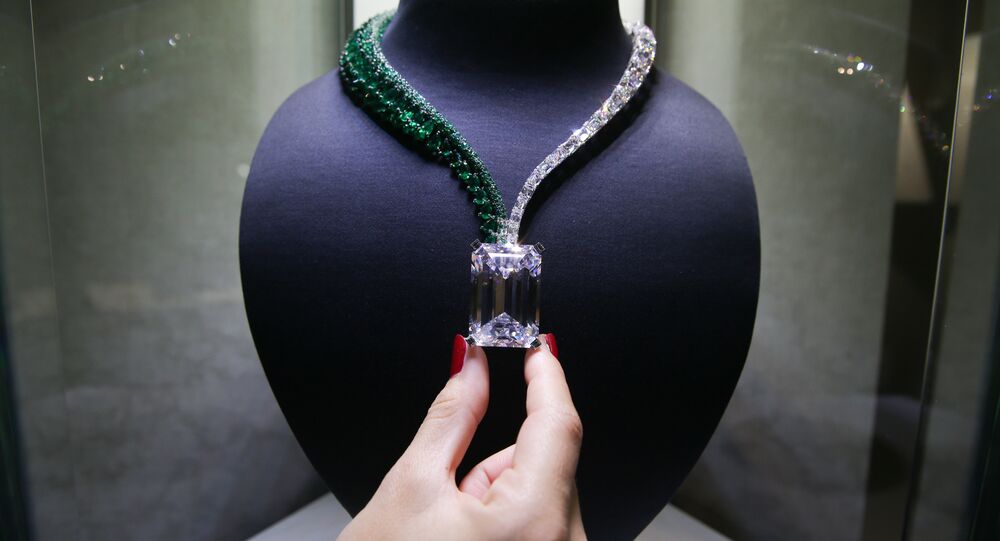 A necklace containing the largest flawless white diamond ever to come up for auction has been sold for a world record US$34 million. But only a small percentage of that money will go to the miner who dug it out of the ground in Angola.

The auctioneers, Christie's, said the emerald and diamond necklace that was sold for a world record 33.5 million Swiss francs (US$34 million) on November 14, is known as the Art of de Grisogono, Creation 1.

It contained as its centrepiece what is known as a D-color diamond weighing 163.41 carats.

Our final #Geneva auction of the season has finished, with the Art of de GRISOGONO, Creation 1 setting a record for a D-colour flawless diamond at auction. Over to #HongKong pic.twitter.com/0qWAolFA63

The stone was dug out of the earth in Angola last year.

It was polished and then cut before being set in the necklace by the luxury Swiss jewelers, De Grisogono.

The diamond is framed on one side by rows of diamonds and on the other by pear-shaped emeralds.

It is not known how much of the US$34 million will go to the miner who dug it out of the earth, but it will probably be a tiny fraction.

The Art of de GRISOGONO, Creation 1, an emerald and diamond necklace set with a rectangular cut diamond of 163.41 carats, sold for $33.7 million at Christie’s Geneva auction on Tuesday night, setting a world record for a flawless D-colour diamond sold at auction #Diamonds #gems pic.twitter.com/xeB7izNtWU

The necklace was unveiled in Hong Kong in September and was taken on a tour of London, Dubai and New York so it could be seen and admired by billionaires from around the world.

The eventual buyer will remain anonymous and placed his successful bid by telephone.

Christie's had estimated beforehand the diamond would sell for between US$25 million to US$30 million, but Tobias Kormind, managing director of Europe's largest online diamond retailer, 77Diamonds.com, said the price should have been higher.

Each stage in the odyssey from the earth’s crust to the auction room has contributed to the power & the beauty of this stunning creation. pic.twitter.com/CAPppj16bF

Mr. Kormind pointed out that in 2013 Sotheby's sold a flawless white oval diamond for US$30.6 million and that stone was 40 percent smaller than the one Christie's sold on November 14.

"Approximately $10 billion worth of rough diamonds come out of the ground every year and approximately $80 billion worth of diamond jewellery is sold every year…Typically the chain of value starts with mining companies, such as Anglo American, that owns De Beers. They will invest heavily in infrastructure up-front and then spend the next 10 or 20 years extracting the diamonds at a profitable margin. The rough diamonds are then sorted according to size and quality, with the lowest quality sold off for industrial use. The remainder are organised into parcels and sold to the diamond manufacturers," Mr. Kormind told Sputnik.

"The manufacturers bid on the parcels based on the yield of the rough. The market is increasingly competitive, so a small miscalculation on what the rough yields, can easily turn the parcel into a loss. Typically the manufacturers try to generate a 10-15 percent profit after costs of manufacture. They then sell the diamonds on to diamond dealers who in turn sell to local diamond dealers or jewelers with a 10-30 percent mark-up. From this point the diamonds are made into jewelery," he added.

"For larger stones like the  Art of De Grisogono, the pricing works differently and the mark-ups will be much smaller. Typically the miner will invite a few select buyers into a tender process and in many cases an existing relationship has already been established from previous cases…the bidder will typically leave 20-50 percent profit as they are taking the biggest risk. The jewellery for a stone like this is almost irrelevant and adds little to the price, but may help to convince the end buyer to visualise what it will look like on the ultimate wearer. However, a diamond like the Queen of Kalahari, now owned by Chopard, which involved taking a 342 carat rough diamond and creating 23 D Flawless stones from it and mounting them into jewelery, is likely to be sold at a much higher mark-up than the Art of De Grisogono," Mr. Kormind told Sputnik.

At Sotheby's in London, the world's largest known fancy intense pink diamond, will go up for auction on on Wednesday.

In October, it was reported Sierra Leone was auctioning off the "Peace Diamond," an uncut diamond believed to be the 14th largest in the world.

The money from the sale next month of the 709-carat diamond will be used to fund clean water, electricity, education and health projects in Sierra Leone.

In September an uncut diamond mined in Botswana and weighing 1,109 carats was sold for US$53 million.

Too Big to Sell? Diamond Headed to Chopping Block After Striking Out at Auction