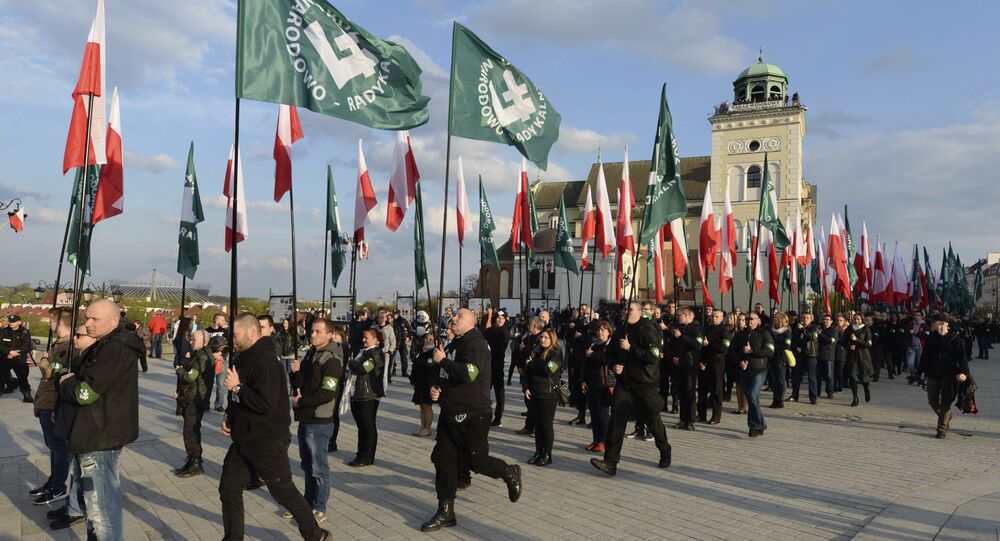 Fascists, racists, and other like-minded extremists will come together on Saturday in Warsaw to march in what has become the largest gathering of bigots in Europe and perhaps the world.

Poland's November 11 Independence Day holiday has become the go-to place for bigots to see and be seen, as white supremacists numbering in the tens of thousands travel from the US, Sweden, Hungary, Slovakia and many other locations to unite with Polish nationalists at what since 2009 has become an increasingly public display of global xenophobia and racism.

‘We Want God' is the branded catchphrase for Warsaw's 2017 march, quoting lyrics from a Polish religious song that was surprisingly referenced by US President Donald Trump in a speech during a July visit to the northern European capital city.

But, despite repeated references to a god, the November 11 march has nothing to do with religion, according to Rafal Pankowski, head of the anti-extremist association Never Again.

"We know that Donald Trump is not the most religious man, and I think that most of the organizers are not very religious, either," Pankowski said, cited by Stripes.com.

"But they use Christianity as a kind of identity marker, which is mostly about being anti-Islam."

Pankowski calculates that the Warsaw march is now the world's largest gathering of far-right extremists.

The We Want God march organizers trace their organization to groups active in the anti-Semitic movement prior to World War II, according to Stars and Stripes.

In a nod to the movement's increasing global reach, US white supremacist Richard Spencer had been scheduled to deliver a keynote address in Warsaw on Friday until the Polish government prevented the notorious racist's entry into the country.

Anti-migrant sentiment of a particularly white supremacist flavor runs high in the region, as central Europe and the Baltics — including a large representation of marchers from Latvia, Belarus, Ukraine, Estonia, Hungary and Poland — have flocked to Warsaw to mark the annual event.

Fascist and racist sentiment is known to increase in difficult economic times, a puzzling point, as quality of life indicators in the region are now much improved over recent times; following earlier wars, occupations and a history of oppressive government.

"Central Europe is living the happiest time in its history," according to Slovakian think tank Institute for Public Affairs President Grigorij Meseznikov.

"Never was life in this region as prosperous as it is today," Meseznikov added.

"If you look at Slovakia, the situation 25 years ago was much worse. There was high inflation and unemployment higher than 20 percent, yet we didn't have a fascist party in the parliament," he said, adding, "Today, we really have a functioning economy, low inflation, declining unemployment; we are in the EU and NATO…. And nevertheless there are fascists in the parliament," cited by Stripes.

Increasing anger toward established elites as a result of burgeoning global economic inequality has fueled membership in far-right parties in Europe, which has resulted in some surprising political gains, particularly in Germany, Austria and the Czech Republic.