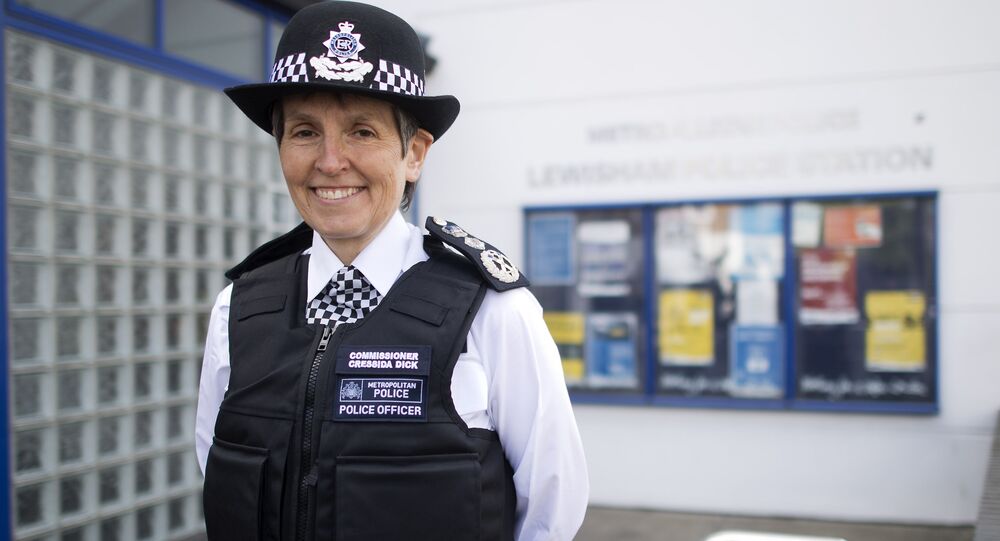 The Commissioner of the Metropolitan Police has denied they will retreat from violent gangs under the weight of £400 million ($529 million) worth of budget cuts. A senior anti-gangs commander has told Sputnik there are very few parts of London where gangs do not have a foothold.

The Commissioner of the Metropolitan Police, Cressida Dick, said on Tuesday, October 31, she was committed to stamping out violent gang-related youth crime in London.

Asked by a Sputnik if recent plans to close down hundreds of police stations across London in the face of £400 million (US$529 million) cuts the force has been told to make by the UK government, she denied it amounted to a "retreat."

"It does not mean we will be less visible and we will in some ways have a greater presence than we once had because we will be more mobile. I am eager that our officers will be seen by the public and that includes the criminals," the Commissioner told Sputnik.

​She said she would continue to make the case that the cuts they have been asked to make between now and 2020, on top of £600 million ($794 million) they have already made since 2010, was untenable.

"I find it incredible that people think we should lose that much extra from our budget," the Commissioner said.

Hundreds of Knives and Guns Recovered

"Violent crime makes me angry. I want London to be as safe as it can be," the Commissioner said, pointing out a recent Operation Sceptre weapons search had led to the discovery of 336 knives and 42 firearms and the arrest of 887 people.

She was speaking at Scotland Yard as police named a 17-year-old boy who was stabbed to death in Croydon, south London, on Sunday, October 29, as Aren Mali.

​Murder detectives, aided by the Trident Gang Command, are still hunting for his killer.

The Commissioner has just returned from the US and she said it was worth putting London's homicide rates into perspective.

She said most US cities had homicide rates which were up to 50 times higher than London's and she said they saw "frightening" levels of violence, caused partly by the easy availability of firearms.

Temporary Commander James Stokley said there was virtually no part of London where gangs of teenagers and young men were not active.

"A lot of gang-related activity centers around the drugs market and where you have got a drugs market you will see subsequent violence as a consequence. Last year we had quite high levels of gun and knife crime in Barnet [London Borough], for example, and after a series of operations that violence reduced significantly," Commander Stokley told Sputnik.

"The number of gangs has remained consistent. Some of that violence may have been attributed to gang violence. There are not many boroughs in London which do not have any gangs at all," he added.

He said the Met was also involved in the "county lines initiative", which involves tackling urban gangs who move into small towns and rural areas across England.

"You often see gangs from urban areas exporting drug sales to quieter areas. They are usually going to a quieter place to take over the drugs market. They also target vulnerable people and we see potential for using some modern slavery legislation to target them," Cmdr. Stokley told Sputnik.