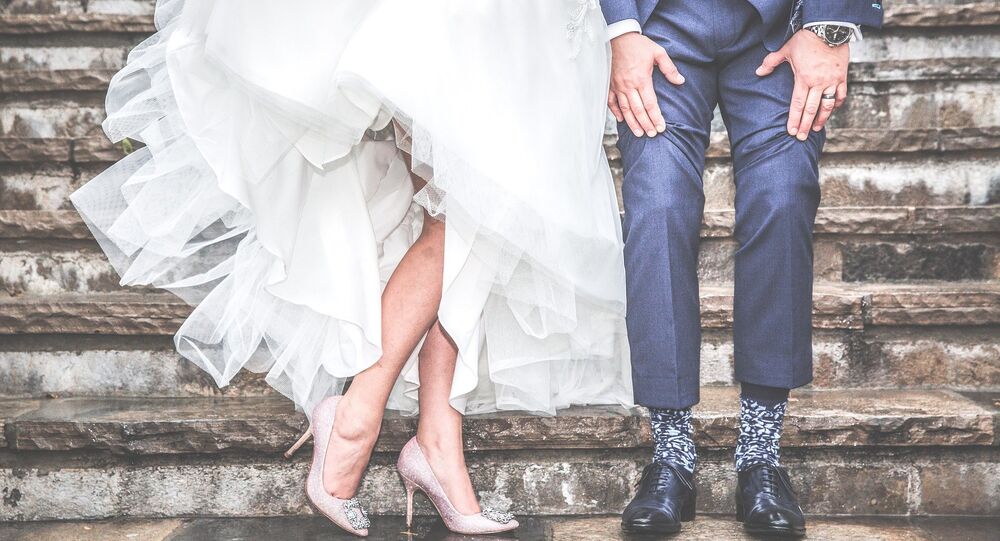 A British couple could face financial ruin as Greek businesses threaten to sue them over a wedding day photo of them simulating a sex act outside one of Greece's most holy sites went viral.

Newlyweds Matthew and Carly Lunn took a picture and posted it on Facebook after they tied the knot in September at the famous St. Paul's monastery on the holiday island of Rhodes, Greece. The picture is thought to have been taken by a family member and shows the happy couple adopt a pose where the bride appeared to kneel before her husband and perform a sex act on him as he punched the air.

© CC0
UK Helicopter Cop Jailed After Filming Naked Sunbathers and Couple Having Sex
Mrs. Lunn later revealed they did it for a "joke."

"We expected a lot of laughs and jokes from people, but didn't expect it to be as popular as it was. People back in England were commenting on it — the whole thing went mad," he said.

While family and friends saw the funny side, Bishop Kyrillos, the island's top prelate, thought otherwise and has now decided to ban all foreign weddings at the white-washed chapel — leaving thousands of other couples' dream wedding plans in disarray.

Fearing an economic downturn as a result of the sudden loss of weddings, which is big business on the isle, companies in the Lindos area are planning to take legal action and seek damages from the couple, who live in Birmingham.

"There is a lot of anger — and rightly so. It was a stupid and tasteless idea, in the first place — and now it is going to leave a lot of people such as hotels and restaurants seriously out of pocket. Rhodes relies heavily on this type of business and now it looks like it is over," said one businesswoman, who organizes wedding packages.

"A number of companies are actively considering taking legal action to try and recoup any potential loss of earnings which could amount to hundreds of thousands of euros. It has certainly left a lot of people worried sick over how they are going to manage in the future. Money is already tight after the economic crisis in Greece, now this has come along," she added.

"We are Greek and we cherish our traditions and the sanctity of our religious sites. We cannot allow this disgusting behavior to prevail. I have hundreds of soon-to-be brides from Britain and all over the world calling me today in tears because of this decision. Shame on those two for the damage they have done," said Giorgos Eleftheriou, president of the Lindos community, who performed the couple's ceremony.

"Would they have done the same in their homeland in front of a British chapel, a Jewish temple, a Muslim mosque? It's a huge damper on our society here. We are one of the most famous wedding destinations in the world and we are booked solid through to 2021," he added.

Mr. Eleftheriou said he was now looking at relocating many of the planned weddings to other locations around the island, although the white-washed chapel at St. Paul's Bay had been the favored choice of most.

A local resident said that after the story broke in the British media, it was featured on television news programs in Greece which is when it came to the attention of the religious authorities.

"Even though it was a simulated act they felt it defiled the church. The situation was really that the local priest and Greek Orthodox Church and the mayor had no choice but to say there will be no further weddings — 99 percent of which are British. People are outraged and talking about suing the couple involved," he said.

"They want them to publicly apologize to Rhodes and particularly the church," the local explained.