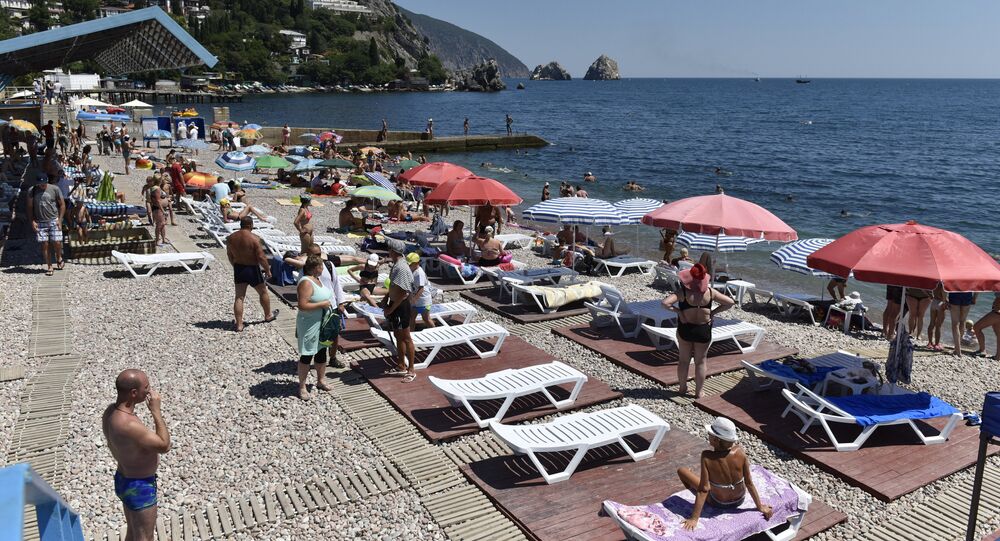 Crimea is developing rapidly and can become an opportunity for those who want to start their own business from scratch. One such example is the story of Roberto Lelli, founder of an Italian ice cream parlor in Crimea, who gave an interview to Sputnik Italy.

Visitors to Lelli's bar in Crimea's Sevastopol can taste at least 42 different types of hand-made Italian ice cream, all made to authentic Italian recipes.

Q:Do you produce real Italian ice cream? What ingredients do you use?

A: Yes, it's Italian. When Crimea became part of Russia, we started to work with official Russian suppliers that import products that are not under sanctions. But, of course, we buy milk and sugar here and at the end of the day, we make an excellent product.

Today I am known as a "Crimean ice cream maker." We are always ready to improve the quality of products, and I typically provide a detailed list of the ingredients that we use. The Made in Italy brand is often misused across the world and is even put on low-quality products. But we hope that people in Crimea will understand Italian-made food is second to none.

Q:How do you feel living among Russians?

A.: Very well, in Sevastopol all my acquaintances are very kind and decent people. Many are very interested in Italy and everything to do with it. If someone here knows a couple of words in Italian, he won’t miss the opportunity to brag about it.

People in Crimea perceive Italians living here as representatives of Italy. Honestly, sometimes I feel like a little ambassador. The locals don’t have any special contacts with Italians, so if you are an Italian — you represent the entire country.

Russians are very positive about Italians, and I like to mix and chat with them. Of course, many in Crimea still remember the Italian movie stars they saw on TV in the Soviet era. I’ve been living here for 8 years, and never seen these films. It's a shame so I must see them.

Q: What do you think Crimea can offer Italian entrepreneurs?

A.: I keep an eye on Italian business in the Crimea, for example, I participate in the International Yalta Forum. Personally, I see significant progress in the development of Crimea, and when it was part of Ukraine, it was left to its own devices. I came here in 2007, and stayed on. And now there are huge opportunities here, because Russia's Crimea is thriving with simply ‘cosmic’ speed.

There are lots of opportunities in Crimea and it seems to me that there are plenty of them for small businesses, not only because there is a need for this, but also because large corporations and multinational companies cannot avoid sanctions, while small businesses feel more comfortable.

Anyone who wants to start a business from scratch should come to Crimea to promote their ideas. I always say to the Italians who know how to produce something: "Come to Crimea. Here you will find the right environment: from moderate taxes to the market, which will most likely expand to the entirety of Russia."

The only problem is that Italians need a visa to be in Russia. There are many opportunities here, especially given that Crimea is growing with a bridge across the Kerch Strait due to be built in 2018.

All those who want to come to Crimea should do so even despite some difficulties, including the language barrier. The doors are open to everyone and you can overcome everything and if you want to.

My personal story is also connected with Crimea. My son Matteo was born on October 7, 2013, which is also the birthday of Russian President Vladimir Putin. And this year on October 7, my daughter Arianna was born. I am proud that my children's birthdays coincide with that of Putin. It's a lucky sign of fate.

Crimea rejoined Russia in 2014, when 97 percent of the peninsula's residents voted in favor of the move in a referendum.

Despite this, the reunification was not recognized by the majority of the Western countries, including EU member states, which subsequently imposed economic and political sanctions on Russia.

© Sputnik / Sergey Malgavko
Head of Norway's Delegation on Crimea: 'Nice Place Where People Live in Peace'
Moscow has repeatedly said that the referendum was conducted in compliance with international law.

The peninsula's reunification with Russia has not been recognized by a majority of Western countries, including the European Union, which subsequently imposed economic and political sanctions on Russia.

Moscow has repeatedly said that the referendum was conducted in compliance with international law.