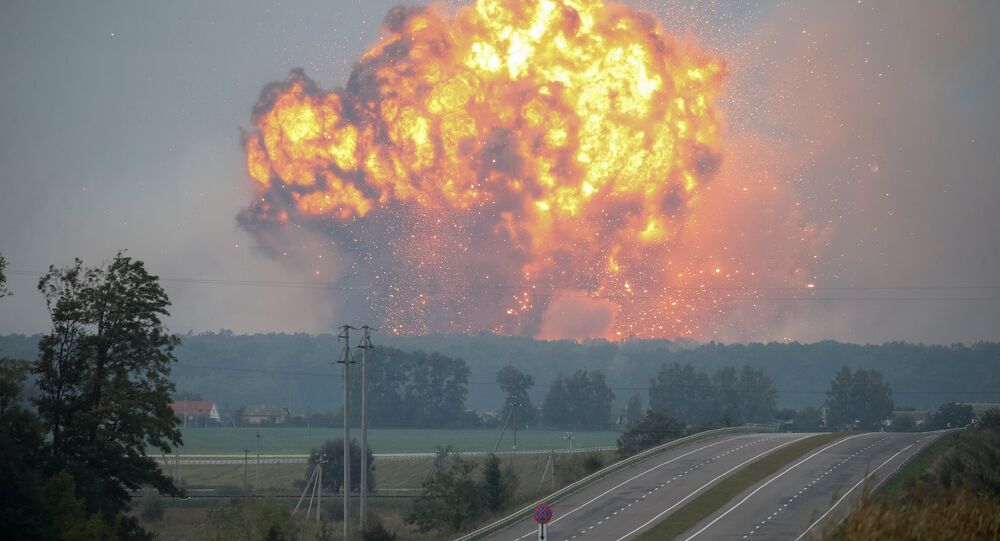 Officials have calculated that last week's massive fire at an ammunition depot in central Ukraine has caused $800 million in damage, destroying over a quarter more ammo than Kiev has used over the course of its three-year war with independence supporters in eastern Ukraine.

According to Ukrainian television network TSN, the fire, which ignited last Tuesday at the Kalinovka base in Vinnitsa region, resulted in the loss of about 32,000 metric tons of ammunition (about 25% more than the estimated 24,000 tons used so far in the Ukrainian military's operations in the Donbass), and forced authorities to close 50 km-worth of airspace around the base.

More importantly, the network explained that the vast arsenal at the base was one of many left behind by the Soviet army as it withdrew from Eastern Europe in the late 1980s and early 1990s. The vast arsenal there was placed in temporary storage facilities, often in areas not properly cleared for weapons storage.

The Kalinovka base is estimated to have contained about 200,000 tons of shells, mines, rockets and missiles, spread out over 150 buildings across 600 hectares of wooded area. TSN pointed out that the majority of these buildings not only lacked a roof, but even the special dirt walls meant to prevent a chain reaction of fires spreading to neighboring depots in the event of an explosion.

© Sputnik / Stringer
Situation Around Burning Munition Depot 'Under Control' - Ukrainian PM
Over nearly three decades of storage, wooden crates containing shells rotted out. Moreover, the ammo depot, one of Ukraine's largest, was guarded and maintained by only 63 people, some of them pensioners.

At least two people have been injured in the fire and explosions. 30,000 more were evacuated. Luckily, no deaths or serious injuries have been reported. An army of over a thousand firefighters managed to contain the fire by Thursday.

Immediately after the explosion, Ukraine's government blamed saboteurs, President Petro Poroshenko calling for the military to "learn to defend" the country's strategic facilities from "sabotage groups." Interior Ministry advisor Zoryan Shkiryak pointed the finger at Russia, writing on Facebook that he was "convinced that this is a hostile Russian sabotage (sic)." One highly original theory was even proposed claiming that Russian grenade-dropping drones caused the blast.

This isn't the first time a Ukrainian ammunition depot has been struck by fire and explosions. In March, the Balakliya ammo depot in eastern Ukraine, containing about 138,000 tons of ammo, went up in flames, injuring two and prompting the evacuation of some 15,000 people. Two years earlier, in October 2015, an explosion at the Svatove, also in eastern Ukraine, blew up, causing damage to 1,700 nearby homes.

Drone footage from the March 2017 incident.

© Sputnik / Dan Levy
DPR Warns US Lethal Weapons Won't Help Kiev 'Win Civil War' in Donbass
Speaking to Sputnik, political observer and Ukraine expert Stanislav Byshok said there was good reason to believe that this latest 'accident' may have been a scheme to write off the theft and illegal sale of vast amounts of ammo.

"The first version, immediately voiced by Ukrainian authorities (i.e. Russian sabotage) doesn't hold water," the analyst said. "But the other two, I think, are closer to the truth: these are negligence, and an attempt to cover up some sketchy schemes through which these weapons could be resold to other countries, to nations where hostilities are taking place and even to terrorist groups. It's obvious that when one arranges such an explosion, it becomes impossible to establish how many weapons there were at the time of the [fire]. In this way, it's possible to write off a vast amount of weaponry."

According to Byshok, the latest blast in a Ukrainian military depot will undoubtedly affect Ukraine's prestige in the West, with Kiev demonstrating itself as a country that either cannot or does not want to control its own weapons stocks.