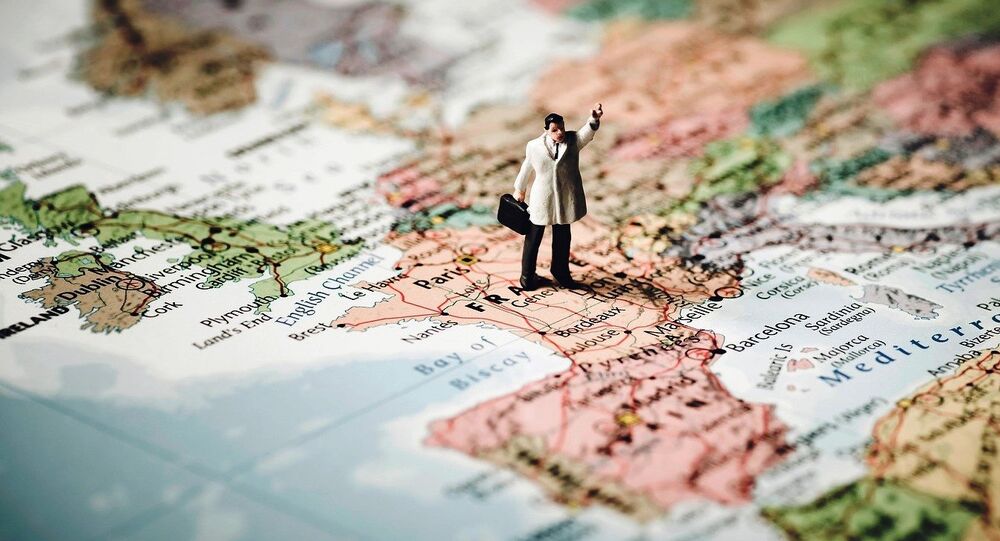 French President Emmanuel Macron has called for a stronger EU budget, worth "several percent of the euro zone’s GDP," which would be funded with the tax revenues of member states. French economists explained to Sputnik France why this statement is not viable and has been made "just for the sake of effect."

French President Emmanuel Macron said that he wanted euro zone member states to set up a stronger budget of their own, worth "several points of the euro zone’s GDP", which would be able to play a more muscular role in the global economy.

The idea was voiced during the French leader's interview with the French magazine Le Point, his first major interview since taking office on May 14. It was published on the magazine's website on Wednesday.

© AP Photo / Olivier Matthys
'Smokescreen' or Reality? Why Macron's Prediction on EU's Breakup May Come True
"The creation of such a budget would, first of all, mean establishing a minimum level of solidarity to eventually be able to raise money in common, and invest and absorb economic shocks that could hit Europe again," the French President told the outlet, adding that it should be funded out of member states' tax incomes.

"Europe’s fiscal policy is too restrictive today compared with those of China, Russia or the United States, and our jobless are paying the price," he explained.

According to the International Monetary Fund, in 2016, the European Union's nominal GDP was estimated at €16.5 trillion, ($19.6 trillion).

Sputnik France discussed the statement with Michel Santi,  a French-Swiss economist who advises central banks and international institutions, the founding member of the NGO "Finance Watch", who said before estimating whether France is able to allocate resources to this budget, they should get the consent of Germany.

"These are the empty statements. It is not important how many percent [they propose] to allocate, one or four, Germany will say 'nein' (no) anyway. Germans were against this initiative back in 2013, and I see no reason for Berlin to agree to it now," he told Sputnik.

"Such statements are made just for the sake of an effect. It is known only too well that it is impossible to implement without the agreement of the Germans," he added.

© AFP 2021 / EMMANUEL DUNAND
EU Budget Chief Urges Europe to Allocate More Funds Under Turkey Refugee Deal
The Institut Montaigne, a Paris-based think tank which prepares analytical reports for Emmanuel Macron, has stressed that the idea of enlarging the EU's budget has positive and negative aspects. The positive side is that the more integrated economic space could enhance the mobility of the European workforce and the bloc's enterprises. The negative side is that it would require a reconsideration of the current EU's perimeter which might result in decrease in the size of the common European market.

"If such a project is implemented, countries such as Poland, for example, will be squeezed out of the market. This probably explains Macron's somewhat neglectful attitude towards Poland, which he demonstrated several days ago," Michel Santi told Sputnik.

However, he said one should ask if a large country such as Poland would allow itself to be squeezed out of the market and become a secondary EU member state. He wondered if Germany would agree to pay for all the rest.

"I personally support the idea of a real European Union. However it will end up with its member states again demonstrating their egoism and hogging the blanket," he stated.

"If the major countries of the Eurozone are ready for closer political and economic integration, they are going to win the short-term and long-term perspective. However, the willingness of the French-German duo [to go ahead with] this integration will be decisive," he stated.

The German Chancellor said the new "economics and finance minister" role could provide "greater coherence" to economic policy across the bloc.
She also backed a plan for a European Monetary Fund that would redistribute money within the bloc to where it was needed.

Speaking to Le Point, Emmanuel Macron said he plans to outline the details of his idea after the German elections, which scheduled for September 24.