'Smokescreen' or Reality? Why Macron's Prediction on EU's Breakup May Come True 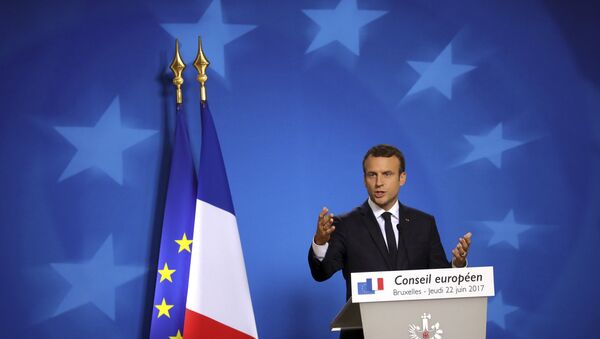 © AP Photo / Olivier Matthys
Subscribe
Commenting on President Emmanuel Macron's recent statement about the EU's possible disintegration without a social dumping reform, a French expert warned in an interview with Sputnik that such a prediction may come true at the end of the day.

Earlier this week, Macron said that the EU may break up if it fails to overhaul a rule allowing companies to send temporary workers from low-wage countries to richer nations without paying their local social charges.

Henri Sterdyniak is one of the authors of a manifesto, which was published back in September 2010 by a group of economists criticizing neo-liberalism. The document was all about the inflexibility of European economic policy during crises.

The Verge of Collapse: EU Provides 'No Clear Answers' to Mistakes It Admits
The authors slammed the "organization of competition among European workers" and warned that there is a real risk that the European countries will "retreat into in themselves."

So did these predictions come true? Sterdyniak told Sputnik France that the answer to this question is certainly "yes."

"The main proof of this was Brexit. Another important aspect is the massive influx of workers from Eastern Europe, as well as the growing popularity of [the right-wing] National Front in France and the Alternative for Germany (AfD) party in Germany," he said.

"There are a number of factors that show that the popular masses in the developed countries of Western Europe believe that their well-being is threatened by globalization and, especially, by the construction of European architecture," Sterdyniak added.

He pointed to a "rather strange situation" when "on the one hand, Macron criticizes the very practice of sending EU workers to other EU member states, but on the other – he does not say anything about globalization and the delocalization of industries, which are of greater importance."

"The consequences of such a practice are much less dramatic than the implications of globalization and competition created by imports of goods from low-wage countries," he pointed out.

He believes that Macron's statements about the tightening of European rule are a "smokescreen" on the eve of a reform of the French labor code.

According to Lang, Macron's goal is to try to boost his approval rating by making such statements now that "he is working out a new labor code which will severely damage social rights."

"So let's see whether any actions will follow these statements," Land said, pointing to the fact that Poland, one of the main countries sending its workers to France, is not involved in the discussion.

"I think that the European ideal has significantly surrendered its positions. The austerity policy is carried out with unprecedented ruthlessness, particularly in Greece. I do not see why and how the reform of sending workers abroad will help improve the situation," he said.

According to him, "Emmanuel Macron has no right to uphold social rights given his views and beliefs."

"There is something paradoxical about a desire to trample social rights across France while saying that you want to protect them at the level of Europe," Lang said.

Splitting Scenarios: Europeans Plan for Fallout From Potential Collapse of EU
"The [French] government decrees on labor legislation will be made public in a few days. As for Macron's statements, they add to the creation of a 'smokescreen,' which aims to prevent the discussion on the French labor code," Lang concluded.

In the run-up to his visit to Bulgaria, Macron said Thursday, "Some political or business circles seek to use the EU's funds while at the same time developing a system of social and fiscal dumping."

He warned that "this will lead to the dismantling of the European Union" if the upcoming EU summit fails to clinch a reform agreement.

000000
Popular comments
The fundamental strategy of the EU is to break individual governments' grip on their economic power. Privatization, banking controls and free movement of labor are the cornerstones. But, more sinister is the crackdown on social spending and workers' rights. Macron will feel the heat when he takes on the French unions, and farmers.
professor.hornblow
26 August 2017, 17:12 GMT5
000000
The Third Reich moved labour around, The Fourth Reich is The European Union and the umbrella term is called CORPORATE FASCISM. The Third Reich had captive labour and the costs were minimal and the workers were worked to death. The Fourth Reich is seeking to compete with the emergent Pacific rim nations. Macron is bluffing, he has been ordered to seek minimal labour costs by Goldman Sachs: he is misleading the electorate. Don't believe what he says, Juncker has publically stated that he lies in given situations such as this.
K9
26 August 2017, 12:51 GMT4
000000
Newsfeed
0
New firstOld first
loader
LIVE
Заголовок открываемого материала
Access to the chat has been blocked for violating the rules . You will be able to participate again through:∞. If you do not agree with the blocking, please use the feedback form
The discussion is closed. You can participate in the discussion within 24 hours after the publication of the article.
To participate in the discussion
log in or register
loader
Chats
Заголовок открываемого материала
Worldwide
InternationalEnglishEnglishMundoEspañolSpanish
Europe
DeutschlandDeutschGermanFranceFrançaisFrenchΕλλάδαΕλληνικάGreekItaliaItalianoItalianČeská republikaČeštinaCzechPolskaPolskiPolishСрбиjаСрпскиSerbianLatvijaLatviešuLatvianLietuvaLietuviųLithuanianMoldovaMoldoveneascăMoldavianБеларусьБеларускiBelarusian
Transcaucasia
ԱրմենիաՀայերենArmenianАҧсныАҧсышәалаAbkhazХуссар ИрыстонИронауОssetianსაქართველოქართულიGeorgianAzərbaycanАzərbaycancaAzerbaijani
Middle East
Sputnik عربيArabicArabicTürkiyeTürkçeTurkishSputnik ایرانPersianPersianSputnik افغانستانDariDari
Central Asia
ҚазақстанҚазақ тіліKazakhКыргызстанКыргызчаKyrgyzOʻzbekistonЎзбекчаUzbekТоҷикистонТоҷикӣTajik
East & Southeast Asia
Việt NamTiếng ViệtVietnamese日本日本語Japanese俄罗斯卫星通讯社中文（简体）Chinese (simplified)俄罗斯卫星通讯社中文（繁体）Chinese (traditional)
South America
BrasilPortuguêsPortuguese
NewsfeedBreaking
20:10 GMTObama Breaks Ground on Namesake Presidential Library in Chicago
20:06 GMTBosnian Serb Leader Says Republika Srpska May Form Own Army
19:20 GMTFlorida Governor Ron DeSantis Takes Aim at Biden Administration’s ‘Catch-and-Release' Policy
19:08 GMTElon Musk Ranked Number One as he Surpasses Jeff Bezos on Forbes’ Real Time Billionaires List
19:07 GMTUS Reportedly Didn’t Tell Afghan Army of Plans to Slink Out of Bagram Due to Fear of Taliban Attacks
18:56 GMTSeveral Fireballs Spotted in US Skies – Video
18:53 GMTFrance's Greens Pick EU Parliament Member Jadot as Presidential Candidate
18:51 GMTCould Report on 'CIA Plot' to Kill Assange Help WikiLeaks Founder Evade Extradition to US?
18:44 GMTYouTube Permanently Removes 2 German Accounts of Russia's RT
18:33 GMTNY Gov. Hochul Signs Executive Order to Alleviate Health Care Workforce
18:28 GMTBlah Blah Blah: Greta Thunberg Slams World Leaders at Youth Climate Summit
18:19 GMTAnnapolis Newspaper Shooter Ramos Sentenced to More Than 5 Life Sentences Without Parole
18:19 GMTPsaki: Generals' Advice to Keep 2,500 Troops in Afghanistan 'Not a Long-Standing Recommendation'
18:03 GMT'Not a Stable Man': Ousted Punjab State Chief Slams Congress Party Leader
17:58 GMTTaliban to Temporarily Adopt Constitution of Afghanistan’s Last Monarch
17:43 GMTOver 400,000 Americans Receive COVID-19 Booster Shot During Weekend
17:43 GMTWhat's Behind Erosion of Public Trust in Biden on COVID-19?
17:10 GMTBiden Administration Gives $1Bln Boost to 1,300 Health Clinics Across US
17:00 GMTThe Hague City Council Member Suspected of Plotting to Kill Acting Prime Minister, Report Says
16:53 GMTTrump Called Ex-Press Secretary Grisham to Insist His Penis Wasn't 'Toadstool-Shaped,' Book Claims