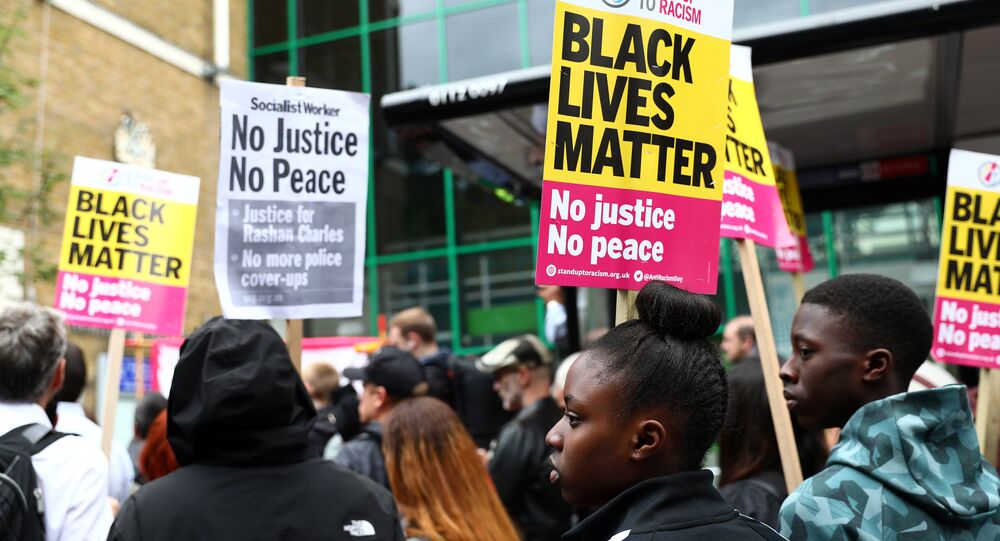 The death of Rashan Charles in police custody and the information released by the Independent Police Complaints Commission (IPCC) have shown that the 20-year-old man from east London had in fact not swallowed a cocktail of drugs shortly before being held down by the Metropolitan Police.

Prior to this revelation however, the British media had called Rashan a "local drug dealer" and some outlets painted him as a "bad boy."

After the protest in Dalston, London in July 2017, many social media users claimed the outrage at the young man's death was unnecessary, arguing that he was just a local drug dealer who had died "swallowing his own stash."

I'm confused why the riots over a guy who stupidly swallowed his own stash and died. #rashancharles

Funny ole bunch of people demoing about Rashan Charles. swallowed his own drug stash now they blame everyone else. weirdos

This picture painted of Mr. Charles after he died was similar to that of Mark Duggan, who was shot in 2011 by police.

The media said Mr. Duggan was a "well-known gangster."

The IPCC released an incorrect press release claiming Mr. Duggan had shot at police, which later turned out to be wrong.

On this day six years ago #MarkDuggan was killed by police. Another name was added to the list. Another hashtag. I cried that day. RIP pic.twitter.com/5m4Y9DLfGf

Once these messages came out from the British media, the damage was done and a picture of these two men had already been painted.

Lee Jasper, a leading black civil rights activist, said that it is typical of the media to paint black people as either "mad, bad or sad." And this has existed since the beginning of slavery right up to modern day, according to Mr. Jasper.

"We see this tactic of smearing individuals who find themselves victims of death in custody. I can cite examples of Clinton McCurbin, who was straggled in the 90s while in prison. We were told he was super violent and attacked the prison guard — the video showed no such thing happened. So there's this temptation by the British media to repeat racist comments that are well-believed by the vast majority of people — of black people being inherently criminal, violent and unstable in some way. Any claim for justice by individuals that find themselves subject to a suspicious death in custody are trolled by the media," Mr. Jasper told Sputnik.

Mr. Jasper highlights the Leveson inquiry, a judicial public inquiry into the culture, practices and ethics of the British press, following the News International phone hacking scandal, it examined the close relationship between the police and the media, it showed that there was "mutual advantage" between the police and News International — the two groups were far too close.

It is this "mutual advantage" that Mr. Jasper highlights as helping to paint a negative picture of black men and women who die in police custody.

"We all know with the Mark Duggan case that the IPCC put out a factually incorrect press release that said that Mark Duggan had shot a police officer. So it's part of an inglorious history of the British media collusion with police services across the country," Mr. Jasper told Sputnik.

IPCC update into the death of Rashan Charles reveals that the object removed from his throat did not contain illegal drugs https://t.co/OX1vJOu6Dn

​Many of these popular stereotypes are believed, however Mr. Jasper said the only way for the public to fight back against this is via social media.

However it has raised the question of why the public are so easily swayed by what some call the "racist stereotypes" spun by the British media.

"I think it is the extent to which popular racist stereotypes are so commonplace in Brexit Britain. Everyone will say, 'oh it's a black guy, we know what that means,' and everyone goes 'well,black guys are all like that aren't they.' How we combat that is getting things out via social media. We can challenge the media," Mr. Jasper told Sputnik.

With the IPCC's releasing its latest statement on Rashan Charles' death — this time saying that he had actually not swallowed any drugs — activists and experts like Lee Jasper are calling for the immediate suspension of the policemen involved.

"The policeman should be suspended immediately. We've got no idea why he was stopped, what powers were used, and we know he was a passenger and not the driver […] The IPCC is dragging its feet and not providing information that is critical to understanding what happened. Whatever people might think about his [Rashan Charles'] peculiar paracetamol and caffeine mix, that doesn't warrant somebody losing their life as a consequence of disproportionate policing on some trumped up drug charge," Mr. Jasper concluded.