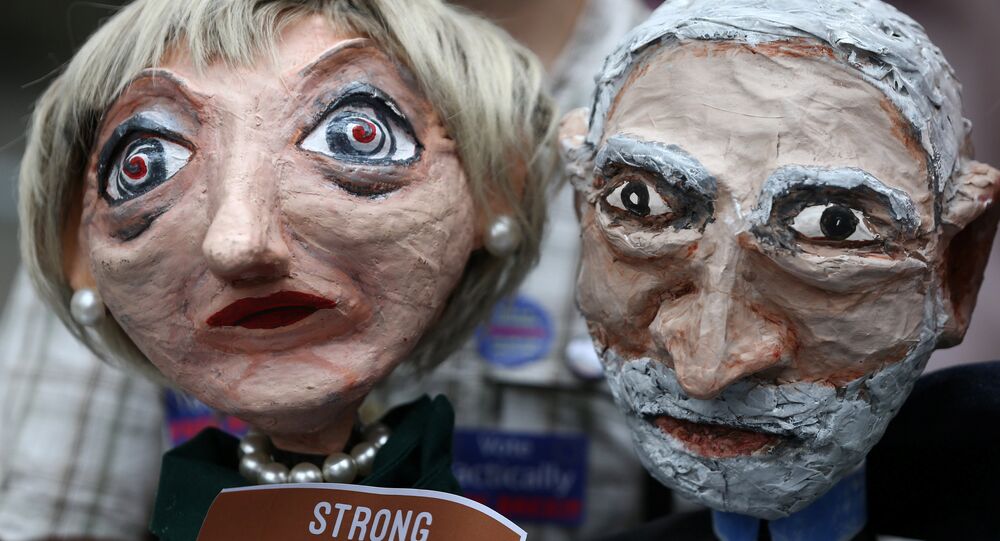 Theresa May meets her Cabinet on Tuesday (July 18), after telling her rebellious backbenchers: "It's me or Jeremy Corbyn." She is expected to bang heads together in the Cabinet Room as she seeks to paper over the cracks in the Conservative Party.

The Chancellor, Philip Hammond, was heavily criticized on social media earlier this month, after it emerged he had claimed those working in the public sector in Britain were "overpaid."

© AFP 2021 / Matt Dunham
'Tory Infighting Is Undermining Britain's Position' at Brexit Negotiations
The leak is thought to have come from a rival within the Cabinet and on Monday (July 17), Independent reporter and columnist Shehab Khan told Sputnik, "It seems as if moves are being made within the Tory Party to determine who is going to take over from Theresa May. That is why the Cabinet is at odds with each other. That is why we are seeing leaks about Hammond, that is why we are seeing attacks on Boris."

Before Tuesday's Cabinet meeting, the Prime Minister's official spokesperson said: "Cabinet must be able to hold discussions of government policy in private and the Prime Minister will be reminding her colleagues of that."

The second round of Brexit negotiations is under way, and Mr. Khan said the Tory infighting was seriously undermining Britain's position at the table opposite the EU's chief negotiator, Michel Barnier.

Mrs. May, mortally wounded by her pathetic showing in last month's general election and her inept response to the Grenfell Tower fire, is desperately trying to persuade the party to keep the faith with her.

My letter to Theresa May with Labour's recommendations on the Terms of Reference of the Inquiry into Grenfell Tower. https://t.co/kbcTRAse0d pic.twitter.com/6oksLAcLpV

​A letter of no confidence is reportedly in circulation, but the number of MPs who have signed it is nowhere near the 15 percent of Conservative MPs —  48 — required to trigger a formal vote of no confidence and a leadership challenge.

Mrs. May reportedly warned MPs at a summer party that a leadership challenge would inevitably lead to Jeremy Corbyn coming to power.

"Go away and have a proper break and come back ready for serious business," she reportedly told them.

"No backbiting, no carping. The choice is me or Jeremy Corbyn — and no one wants him," she added.

Jeremy Corbyn briefly overtook Theresa May for best PM for first time in late June, though May now leads 38% vs 33% https://t.co/YBSjPdi8hx pic.twitter.com/Ki29Tf1GqF

​Although most Tories accept Mrs. May is now a political liability, they realize the choices are limited and they are conscious that any new leader will have to have the support of their new allies in the Democratic Unionist Party (DUP).

The DUP leader Arlene Foster, herself under siege in Northern Ireland, would not welcome Mrs. May's departure and would have to be courted assiduously by a new Tory leader.

The summer recess begins at Westminster on Thursday (July 20), and it is thought highly unlikely that a challenge will come before MPs return on September 5.

In fact, the equivalent of the "ides of March" for Mrs. May is most likely to be the days after the Conservative Party conference in Manchester in the first week of October.

If Mrs. May's keynote speech goes badly — especially with noisy demonstrations against her in the streets outside — the Tory grandees will begin circling for the kill.

There is currently no clear candidate to replace her.

The Foreign Secretary, Boris Johnson, still has not recovered from the mauling of his reputation during last year's leadership contest, where he was stabbed in the back by his erstwhile friend Michael Gove.

Mr. Hammond's slim hopes could have been ended by his comments on public sector pay and the only other contenders are David Davis, who has his hands full as Brexit Secretary, and Home Secretary Amber Rudd.

"We want to make sure we have a soft landing and protect jobs," Mrs. Rudd on Tuesday, packaging herself as the soft Brexit candidate.

Amber Rudd asked on Sky News whether Theresa May should sack squabbling ministers. She says "I see a Cabinet working well together". Sure.

​But her wafer-thin majority of 346 in Hastings & Rye may preclude her from being considered as a viable candidate, because the prospect of a prime minister losing her own seat at a general election is too horrible for the Tories to contemplate.

The Editor of Conservative Home, Paul Goodman, said the Tories should consist someone new as leader, someone from the 2010 intake of MPs.

"This person would appeal both in Remain-backing, migration-easy London and in the Leave-supporting, immigration-resistant midlands and north. He or she would have all the media-savvy of the professional politician while also being a complete outsider. He would be at ease with modern Britain while being convinced of Tory truths," wrote Mr. Goodman, describing his perfect candidate.