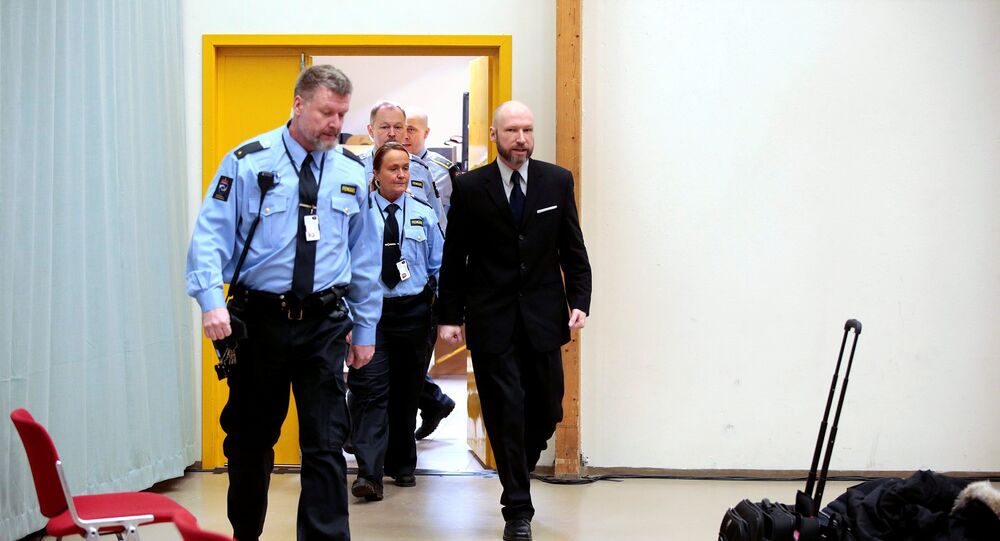 Norway's indubitable public enemy number one Anders Behring Breivik never ceases to amaze. Not only does he continue his struggle against the Norwegian penitentiary system over "inhumane" prison conditions, but has recently legally changed his name.

© AFP 2021 / JONATHAN NACKSTRAND
Breivik Back in Court: Norway Seeks to Overturn 'Inhumane Treatment' Verdict
From now on, Breivik, who is infamous for having killed 77 of the 111 people who were murdered in Norway in 2011, now wishes to be known as Fjotolf Hansen.

"I can confirm that he has changed his name; it's official," Breivik's lawyer Øystein Storrvik said, as quoted by the Norwegian daily Verdens Gang. However, Storrvik refused to dwell on the reasons that compelled his client to undergo a name change, not wanting to disclose the contents of their discussions.

A search in the Norwegian business register confirmed that Breivik Geofarm, an agricultural firm created by Breivik to obtain fertilizers he subsequently used to make a bomb, is now registered in the name of Fjotolf Hansen.

Remarkably, this is not the first alias Breivik uses for his goals. Before the 2011 attacks, Breivik circulated an 1,500-page ideological manifesto under the name Andrew Berwick. While Hansen is one of Norway's most common surnames, Fjotolf is rarely used, if at all.

​In July 2011 Breivik killed eight people in a bombing outside Oslo's government quarter, and then proceeded to track and gun down 69 people and injure another 90, most of them teenagers, at a Labor Party youth camp on the island of Utøya. Breivik saw himself as a crusader at war with multiculturalism and claimed the slaughter of the campers was his wake-up call to stop the looming Muslim invasion. Consequently, he never expressed any remorse or sympathy for his victims.

© AP Photo / John Locher, File
Alternate Reality: Trump Gets 'Erased' From Media Alongside Breivik
Breivik was slapped with a "life sentence," which in Norway means a 21-year prison term that can be extended indefinitely. Ever since he was put behind bars, Breivik has protested his isolation and lodged one complaint over prison conditions after another, claiming the authorities are intentionally torturing him with bad food, cold coffee and inconvenient pens that cause rheumatism. After exhausting all legal options, Breivik (or Hansen) pledged to take his case to the European Court of Human Rights.

Norwegian national broadcaster NRK recently announced plans to commemorate Breivik's attacks in a drama series called "July 22." With over 70 million NOK in its budget, the series consisting of six hour-long episodes is expected to be aired in 2019.

The film, however, will mostly focus on people who had to cope with the consequences of the attacks, such as burying the victims, saving the injured, comforting the mourning and judging the guilty. Therefore, Anders Breivik will not be a direct part of the story.

"He has no natural place in our series. And he does not deserve one," script writer Sara Johnsen said.

© Flickr / ParaTom
Move Over, Breivik! Here Comes Norway's New Public Enemy #1
Incidentally, Norway's biggest criminal in the pre-Breivik era, black-metal icon and far-right political activist Varg Vikernes, who notoriously slew a fellow musician and burned several churches, also underwent several name changes. At the beginning of his career, he legally switched his birth name Christian to Varg (which means "wolf" in Norwegian). After receiving a maximum sentence and being released on parole after serving 14 years, Vikernes changed his name again, this time to Louis Cachet and settled down in France with his wife and children, who he had fathered while serving a "maximum sentence."