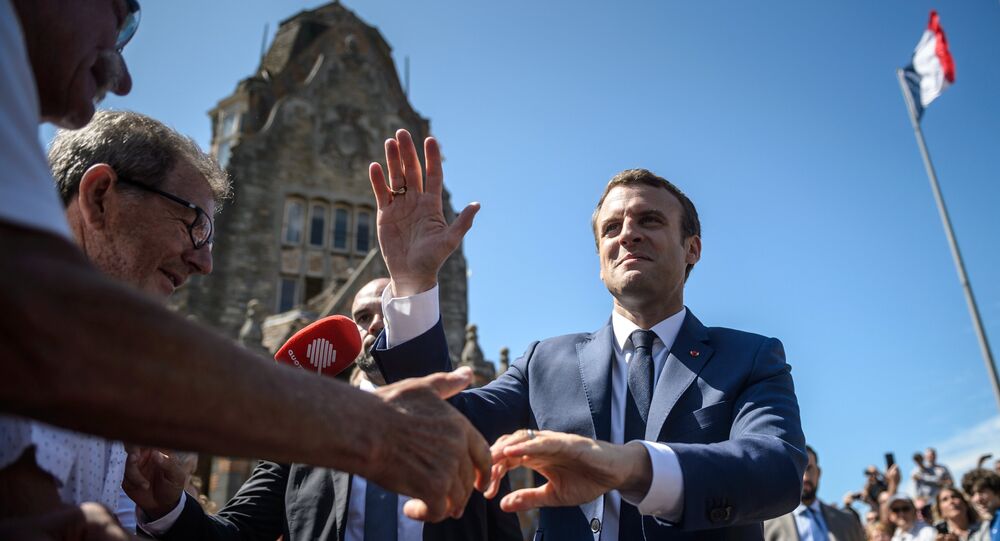 The victory of the new French political party En Marche! and its creator, President Emmanuel Macron, in the first round of the country's parliamentary elections, reflects the disintegration of traditional French two-party politics, Dr. Christoph Frei told Radio Sputnik.

LREM won 32.7 percent of the vote, giving it a projected majority of between 400 and 440 seats in the 577-seat French parliament.

However, the victory of LREM was marred by the lowest turnout in the history of France's Fifth Republic, with just 48.6 percent of voters casting their ballot.

The overwhelming result, and low participation, has left all parties keen to mobilize voters ahead of the second round run-off on June 18.

"What we see is an implosion of the dominant party balance that has dominated France and French politics for the past 60 years. So yes, absolutely, what we see is a crumbling down of party structures that have basically seen their best days," Frei said.

France's traditional parties are suffering the consequences of institutional weakness and their own poor performance in the eyes of the electorate.

© REUTERS / Stephane Mahe
What 'Unsubmissive France' Political Movement Stands for
"On the one hand, French political parties are basically loose coalitions built around men, the degree of institutionalization of French parties has never been very high. So, you don't see parties as you see them in Germany or in England."

"The second factor is that these established, or dominant parties over the past 20 years, simply have not delivered. You have seen an elite that was preaching water while drinking wine and as time went by, it became increasingly clear that this elite was not well-respected any more."

The low turnout for the legislative election was in contrast to high turnouts of 77.77 percent and 74.56 percent in the first and second round of presidential elections month.

Frei said this is a consequence of the weakness of the French legislature under France's dual-executive system, in which the President wields considerable power. The system was implemented in 1958 when Charles de Gaulle returned to power following years of political wrangling in the French Fourth Republic.

"The French parliament is one of the weakest parliaments in the Western world. It does not really have much competence. So what you see there is a bunch of people that are basically supposed to follow the President. That is the logic of this political system, it's a presidential republic."

© REUTERS / Benoit Tessier
Likely REM Majority in French Assembly May Have Rough Start Due to Inexperience
A strong parliamentary majority will give Macron the power to enforce his promised pro-business reforms. These include €60bn in budget savings, reforms to the labor market and the state pension system, as well as 120,000 layoffs in the state sector.

"But let us not make any mistake – he will face many obstacles from outside of the parliament. In fact, the most stubborn resistance will not come from parliament, of course, but from many, many other veto players in French society."

On the other hand, Frei said, Macron will have the support of the higher echelons of French state institutions and large corporations. He thinks that the new President is the right person to carry out necessary reforms in France.

"He will be backed by those corporations in France that do opt for modest change. For example, the employers, big transnational corporations, as they work very closely with the French state. So, yes, he will have allies, but once again he will be looking at a very conservative society in which many – some will say too many – people want things to stay as they are."

"I do feel that he is the President France needs right now. France is really in dire need of reform. Look at the labor market, look at integration and migration policies."

"I think he is the man but – there is a big 'but' there – we need to wait and see whether he will be able to push the reforms that everybody is waiting for."

Why France Has Larger Potential Than US in Mediating Qatar Crisis