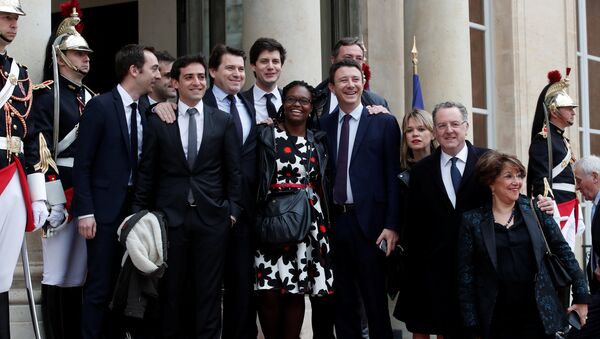 © REUTERS / Benoit Tessier
Subscribe
The results of the first round of the French parliamentary election indicate that La Republique en Marche (REM) has a good chance of securing the majority in the National Assembly, but the party may face difficulties in the beginning due to abundance of inexperienced members, experts told Sputnik.

PARIS (Sputnik) — According to the Interior Ministry, REM, founded by President Emmanuel Macron, came in first with 28.21 percent of the votes on Sunday. Right-wing The Republicans gained 15.77 percent, while the National Front had 13.2 percent and the left-wing La France Insoumise got 11.02 percent. The previously ruling Socialist Party got 7.44 percent.

France saw the record abstention of a little over 50 percent during the first round of the parliamentary election. Daniel Boy, an expert from CEVIPOF research center, told Sputnik that this could weaken the standing of the potential absolute presidential majority, since it was obtained by a minor part of the voters.

"We saw a victory of Macron’s party, but in a rather special conditions – the record abstention that we never saw before in France… It’s true that normally the winning party, the party of the president-elect, gains more than 32% obtained by Macron. Does it weaken his majority? Yes, because one can always say that he was not elected by the majority of the registered voters… But it is rather a symbolic weakening", Boy said.

The expert added that the abstention was due to a certain fatigue of voters, tired of never-ending political agitating since presidential campaign started last September, as well as the general lack of motivation among those whose preferred candidates lost in the first round of the presidential election.

Eddy Fougier, a political scientist at IRIS France research center, told Sputnik that hardly anyone could have imagined REM's likely majority six months ago or a situation when the major political parties present in the parliament are being cast away.

"What we’ll see next Sunday is a very large majority in the National Assembly of Macron’s party. It is not a 'classical' party though. It is obviously a surprise, since only 6 months ago no one could have imagined it. Even after [Macron] was elected president, one could have questioned his absolute majority… But now we can expect this majority to be very large, it will be superior to 400 seats, which is absolutely enormous… Everything is changing, take the socialist party, which was in power for 5 years and which has almost nothing left," Fougier said.

According to the expert, France was witnessing a "political earthquake," although one happening in a surprisingly "soft manner."

Majority Leaning on the Job

The presidential party is likely to get more than 400 out of 577 seats in the lower house of the French parliament. Since many of the REM members, who would become elected officials, do not have any political experience, this majority will have hard time understanding how the lawmaking actually works, according to experts.

"We will have the National Assembly with a touch of verdancy, which is always harder to organize, parliamentary work is complicated, technically complicated, many months are needed to understand the logic of its functioning, how the law is passed, etc… But the French wanted the renewal of the parliament, which means that they will train to make the system work. There will be certainly some mistakes, but that’s what the French people asked for. You can’t ask to have something new and at the same time complain that this new may not be as efficient as the people who have been doing politicians for 20 years," Daniel Boy says.

It is hard to say who the main opposition to Macron will be, since the Socialist Party lost its position in the parliament, and the large number of The Republicans joined Macron’s camp. Fougier thinks that the main opposition to the president will be the left parties whose situation is "catastrophic" and who will take their protest to the streets.

"At a certain moment we will have a new opposition, but during several months we will have an impression to not have any opposition at all. The REM party has more than 400 seats, the polls will be favorable to Emmanuel Macron. But after the parliamentary recess we can expect the demonstrations against the labor law, and the decline of popularity… When the government starts making decisions, and for the moment we did not really see anything – then we will see who is the leader of the opposition, will it be [National Front leader] Marine Le Pen, [France Insoumise leader] Jean-Luc Melenchon, or the new leader of the Socialist Party, or the right party… We will then see the opposition of the left parties, but not in the parliament, they will take it to the streets to protest the reform of the labor law," Fougier said.

Daniel Boy added that with Marine Le Pen likely to be elected to the National Assembly the opposition will be strong, but the question is whether Le Pen will manage to form a parliamentary group in order to be able to impact the country’s lawmaking.