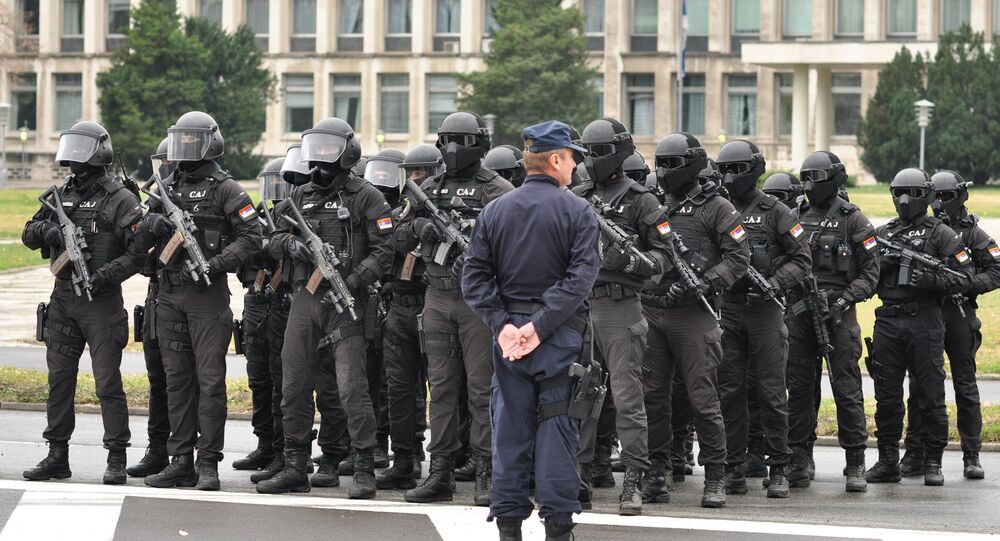 Stefanovic took part in a security conference in the city of Tver and met with Nikolai Patrushev, Secretary of the Russian Federation Security Council.

The politicians signed a bilateral agreement on greater cooperation between Serbia's Minister of Internal Affairs and the Russian Federal Security Service [FSB].

Stefanovic explained that the agreement will provide Serbian security forces with the invaluable expertise of Russia's security specialists.

"This is especially important to us because we need to work hard every day to fight the modern challenges of terrorism and organized crime. There isn't a country in the world that can fight it alone, and especially not a small country."

The Russian FSB has already aided its Serbian counterparts with training sessions and that cooperation is set to continue.

"We have already had one training session which the Federal Security Service offered to people from the Interior Ministry. Another group of 10 specialists will undergo training in June and they will have the opportunity to take advantage of the best knowledge that the Russian security service has," the minister explained.

© Sputnik / Iliya Pitalev
Kosovo – Creation of the West That 'Will Now Form the Kosovan Parliament'
"One of the themes of the conference [in Tver] was protection against cyber-attacks, threats to cyberspace security, whether it be a single breach of people's data security or a danger to state institutions."

The Minister said that despite pressure from the West over Serbia's strong links to Russia, Belgrade is grateful for Russia's support and will continue to enjoy a close relationship with Moscow.

"We want to cooperate with Russia as well as all other countries. On the other hand, I never heard for example China or Russia object to cooperation with other EU countries or the USA and so I think that kind of fear is unfounded. We have very close cooperation with Russia not only in the field of security, but also in all other areas. In addition, there is the traditional, historical and cooperation that helps Serbia on various fronts. Here I am thinking about the policies I discussed with Patrushev, the cooperation to protect Serbian national interests above all in Kosovo, where Russia supports Serbia very strongly for which we are very grateful."

Earlier this month, the German government admitted that Saudi Wahhabi missionaries are actively proselytizing radical Islam in Kosovo, despite the presence of the NATO-led Kovoso Force and the local Kosovo Police.

Stefanovic said that the government in Pristina appears unwilling to tackle radical Islamist groups operating in Kosovo, which per capita sends the greatest number of foreign-born Islamist fighters to Iraq and Syria of all European countries.

"For several years we have had a permanent organ consisting of the police, prosecutors, the Security Information Agency and the military, which meets every day, gathers information from the field and on that basis takes decisions on what actions to take to ensure the security of Serbia."

"They do it so well that Serbia citizens don't even notice it. There is concern [within that organ] over the developments in Kosovo and Metohija. It seems to me that there isn't willingness on the part of the Pristina authorities to seriously deal with it," the Minister said.

© AP Photo / Visar Kryeziu
Belgrade Calls Kosovo's Plans to File 'Genocide' Lawsuit Against Serbia Provocation
In April, Serbia's request to extradite Kosovo Albanian politician and former Kosovo Liberation Army leader Ramush Haradinaj from France on charges of war crimes was refused. The politician, who leads the opposition Alliance for the Future of Kosovo (AAK), is a frontrunner in Kosovo's parliamentary elections to be held on June 11.

However, Serbian prosecutors allege he is responsible for multiple murders and rapes of ethnic Serbs in Kosovo in June 1999. Haradinaj has already been tried and cleared by The Hague war crimes tribunal for alleged war crimes committed in 1998.

"There is a huge concern if this scenario comes to pass. If Haradinaj becomes Prime Minister we will have a difficult and complex situation. First of all because it contradicts what the Kosovo Albanians promised, namely the creation of the Community of Serb Municipalities [ZSO]. Of course, this situation makes Serbs feel more insecure. How can you believe that someone has good intentions when he participated in the most serious war crimes and when he is suspected of killing people? I do not know how anyone in Europe could shake his hand, apparently it doesn't matter to them."

"There is a much more important question: if Serbia is always getting the message that it needs to build the rule of law, then you can't just dismiss what are legitimate requests from Serbia, ask Serbia to make concessions, but at the same time support a statement or fail to oppose statements that are clearly intended to threaten the stability of the region. It is unacceptable to me that [inflammatory] statements are made that say, 'Don't pay attention, it's pre-election rhetoric.' Imagine if Serbia had said something like that."

© AFP 2020 / ARMEND NIMANI
EU's Post-Brexit Pivot to the Balkans Piles Pressure on Serbia to Give Up Kosovo
Last month, Haradinaj raised tensions with Belgrade when he called for more Serbian territory to be annexed in favor of Kosovo.

His comment came after Albanian and pro-Albanian politicians renewed efforts to kick-start the "Greater Albania" project to unite Albanians in Kosovo and elsewhere in the region.

In April, Albanian Prime Minister Edi Rama went on record saying that Albania and the self-proclaimed republic of Kosovo, also inhabited by Albanians, could reach a "union."

"We don't believe that this is pre-election rhetoric. When Haradinaj and Thaci and Rama say things like that you see that this is not an exaggeration, it is the continuity of a policy that advocates the creation of 'Greater Albania' and that over time they are trying to turn it into some that is completely natural to hear every day."

"Then on the other hand, we are told, 'Oh, don't pay attention.' Then with time you eventually get used to it so that one day we will have a conference about it. Then they ask, why do we react so strongly to it. We want our voice to be heard in the East and in the West so that we can very clearly convey the warning and fear that that would cause serious regional instability. Anyone who doesn't pay attention to it today must take some of the responsibility for what could happen tomorrow," Stefanovic warned.

EU Promotes Stability in the Balkans 'at the Expense of Serbia'