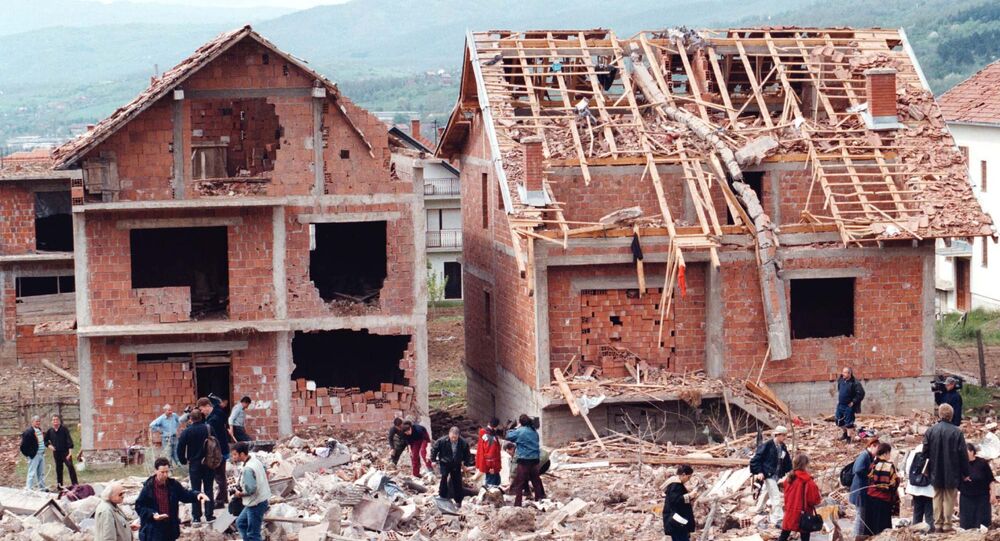 Serbian Prime Minister and President-elect Aleksandar Vucic commented to Sputnik on the recent remarks of former head of the OSCE verification mission in Kosovo William Walker that he "has a project to unite Albanians," saying that the 'Greater Albania' project was used as a pretext for NATO's bombing of Yugoslavia.

The whole world now has the evidence served on a platter that William Walker is a 'Greater Albania lobbyist', who, as the former head of the OSCE verification mission in Kosovo, lobbied for the implementation of this project,  Serbian Prime Minister Aleksandar Vucic told Sputnik Serbia. Prime Minister Vucic, who was recently elected Serbia's president, will be sworn in in June.

His comments follow the recent statement of William Walker, former head of the OSCE verification mission in Kosovo, that he has been working on a "project to unite Albanians."

© AP Photo / Ronald Zak
The Head of the Kosovo Verification Mission of the Organization for Security and Co-operation in Europe (OSCE) William Walker answers reporter's question during a press conference at Vienna's Hofburg Palace, Moday, Jan. 25 1999

The American, who spoke during a ceremony in Pristina on Monday to mark the 17th anniversary of the founding of Ramush Haradinaj's party, the Alliance for the Future of Kosovo, noted that he has been coming to Kosovo often since 1999.

"This project that I'm working on is meant for all Albanians in Kosovo in the diaspora, in Albania. I'm working on a joint project for their unification. Albanians worldwide were united in the 1990s with the sole purpose of the liberation of Kosovo. I was with them when they declared independence. Albanians have won and they came here to celebrate together. Now is the time for the final step, for all of us to be together, to accomplish this achievement," the local media quoted Walker as saying.

"Serbia will in every place and at every level present this as the ultimate proof that Walker's goal was never to protect human rights in Kosovo but to fight against Serbia and for the creation of the 'Greater Albania'," Aleksandar Vucic told Sputnik.

This is an important piece of news that should be given attention beyond the everyday political level, the Serbian leader continued.

© AP Photo / Boris Grdanoski
'Greater Albania': Why Macedonian Political Crisis is Part of Broader Strategy
"We will continue to talk about Walker's message. And we'll do it at all levels, in Europe and in the world," he added.

"William Walker was someone who represented a so-called 'independent and objective mission' of the OSCE, or at least that's what they have been attempting to convince us. However, do not forget that the 'Racak case' was a fabrication used as the reason to start the war," Vucic  told Sputnik.

"That was the reason, it was a pretext for war. It all started with William Walker's lies. This is a man who now openly shows that he is in fact a Greater Albania lobbyist. This is the same man because of whom (NATO) carried out an aggression against the Republic of Serbia. This is the same man. This is a man who now stands for 'Greater Albania' and says so openly. He is no longer even hiding it," Vucic said.

Walker is known for heading the OSCE "verification mission" in the province, whose activities and reports during 1998 and 1999 influenced public opinion abroad in favor of launching a war against the Federal Republic of Yugoslavia (Serbia and Montenegro), which eventually happened in March 1999.

Earlier that year, the bodies of 45 Albanians were discovered in the Kosovan village of Racak. The Walker-led OSCE mission accused Serbian security forces of killing them without presenting any evidence — although it was never determined whether the victims were in fact civilians.

© AP Photo / Boris Grdanoski
Not Even 'Blood in the Streets of Macedonia' Would Deter NATO From Greater Albania Project
Reports coming from the Serbian side said that those were Albanian terrorists, members of the Kosovo Liberation Army. Nevertheless, it was this very ' Racak case' which was qualified as a 'crime against civilians' and was used as a pretext to launch NATO's bombing of Serbia. Later, many international experts reported that the case had been fabricated.

Aleksandar Vucic also pointed out that former Finnish President and UN envoy for Kosovo Martti Ahtisaari, who was also "brought in as an international mediator, who was supposed to be independent, who was supposed to offer an objective plan for resolving the problems between Serbs and Albanians, is now on Pristina's Albanian team.

"This tells us that from the beginning, everything was directed not against (President) Slobodan Milosevic, or certainly, not only against him, but primarily against Serbia," Vucic told Sputnik.

"Now, we have the key evidence for this. Now this is no longer our media's reports. Now this is not a question of whether some of us are thinking it. They have offered this evidence themselves, provided it to the world on a platter," he added.

© AP Photo
Macedonian Conflict: 'Greater Albania' Used by West to Destabilize Balkans
"Well — does all this mean that in future we should once again trust some supposedly objective international organizations, whose representatives will, in the most direct and blatant way, advocate a 'Greater Albania'?" Vucic asked. He noted that "their statements were the casus belli for the most direct attack on the Republic of Serbia."

Vucic does not think that his country will be able to "turn things back" soon and "make the US and 23 EU countries revoke their recognition of Kosovo" — but he thinks that "a great diplomatic struggle continues."

"Now we have important proof. If you look back, all the greatest battles and not only battles, but wars had been won by those who had the morals on their side. And now everything has become clear to everyone. Walker's confession is very important, and we should keep talking about it. The whole world is now aware that from the very beginning they had this plan for a 'Greater Albania' and were not fighting against any particular regime. They had invented it to be able to attack Serbia and grab part of its territory," Vucic concluded.

Meanwhile on Wednesday, Belgrade said it will appeal to the UN over Walker's statement.

© REUTERS / Marko Djurica
The Gears of War Grind for Greater Albania
The local media reported that Serbian Justice Minister Nela Kuburovic said that she will inform the UN member states about "the disgraceful role of the creator of the Racak case" that was used to launch NATO’s 1999 aggression against Serbia – who is now an Albanian lobbyist and one of the authors of a plan to change the borders in the Balkans.

Jadranka Jankovic, who is in charge of EU integration, confirmed this for RTS.

"Of course. We should turn to (the UN). The "Greater Albania’ project is not only Serbia’s problem. It includes the territory of several countries in the Balkans, and I think all of us need to be concerned," Jankovic said.

According to her, Walker’s statement is proof that the Greater Albania project is not merely flirted with at election time, but is instead "something that exists."

"I think we have good, extra arguments in our hands to show to the EU," Jankovic said.

Commenting on the above statements, Slavka Kojic, Serbian expert on international legal activity, told Sputnik that Walker's remarks come as a serious blow to the international order based on the UN charter and an urged for re-consideration of borders of the UN member states.

She added that she is convinced that Walker has been speaking on his own behalf and not on behalf of any state or any international entity, however his remark is not any less dangerous.

Meanwhile, well-known Serbian lawyer Branislav Tapuskovic noted that Walker has voiced what Serbia has been long trying to prove in the International Tribunal for the former Yugoslavia.

"He revealed that it was the plan backed by the international community. However it can be implemented only forcibly, as the non-Albanian residents of the countries which fall within the so-called 'Greater Albania' – Macedonia, Montenegro, Greece and self-proclaimed Kosovo – will defend their lives and property. Nobody had ever bore any responsibility for such calls and Walker's remarks won't be an exception," he finally stated.