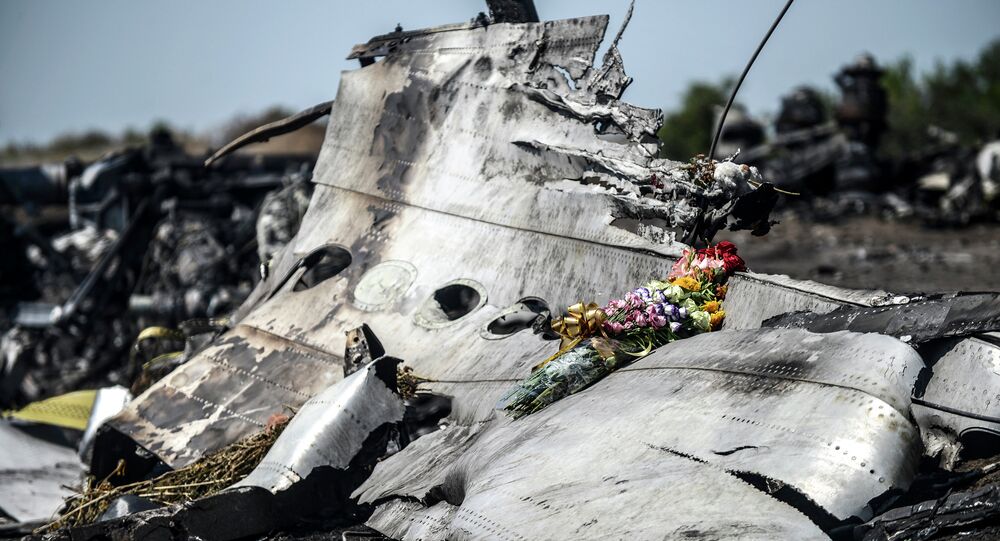 Could Ukraine Have Destroyed Evidence of Its Responsibility for MH17 Crash?

© AFP 2021 / EMMANUEL DUNAND
No Hiding the Truth: JIT Investigation Into MH17 Tragedy Slowly Crumbles Due to Bias
The airliner crashed in the eastern Ukrainian region of Donbass on July 17, 2014, while en route to Kuala Lumpur from Amsterdam. All 298 passengers and the crew members aboard the aircraft died in the incident.

According to the newspaper, the copies were obtained from an unnamed source. The newspaper also said that it cannot confirm or disprove the authenticity of the documents. The report claims that the original document was issued by the Security Service of Ukraine (SSU) on April 20, 2014, three days after the crash.

The document was entitled the "Plan of counterintelligence and operational search measures of the SSU Counterintelligence Department." The measures laid out in this plan were allegedly aimed to hide evidence proving the Ukrainian military’s responsibility for the crash.

In an interview with Radio Sputnik, Russian political analyst Vladimir Kornilov noted that even without these documents the activities of the Ukrainian Security Service after the crash were "suspicious."

"I cannot confirm the authenticity of the documents, but the SSU really conducted operations after the incident and its activities were suspicious. For example, there were a lot of absurd versions of the crush distributed in the first hours after the tragedy by the SSU and then-director Valentin Nalivaychenko. All those versions may have been used as a pretext for some special operations," Kornilov said.

Maksim Blinov
Dutch Journalist Released New Material of MH17 Plane Crash
The analyst also pointed to the fact that it is still unknown what happened to the air traffic controllers who were tracking the flight and the recordings of air traffic surveillance over Ukraine on the day of the crash.

"Since this evidence is absent, we can assume that this absence is the result of some special operations by Ukrainian security and intelligence agencies, including the SSU," Kornilov suggested.

In particular, the documents mention a person who allegedly witnessed the MH17 crash.

"He has evidence of a violation of law by the Ukrainian army and aviation, which was shooting down a civilian passenger aircraft on July 17, 2014," one of the copies read.

According to another document dated July 24, 2014, several witnesses of the crash were detained by the SSU department near Lugansk.

Moreover, the documents claim that one serviceman made a video recording of the incident. The source told the newspaper later that the serviceman was shot dead by a sniper outside the conflict zone in Donbass.

© Sputnik / Andrei Stenin
Moscow Voicess Readiness to Provide Help to Decode Radar Data on MH17 Crash
One of the documents obtained by the newspaper is a copy of an order allegedly signed by then SSU first deputy head Vasily Gritsak on July 24, 2014. According to the report, the document ordered "obtaining information [on the incident] from locals, military personnel and others" and "taking efficient preemptive measures."

Further commenting on the report, Kornilov noted that there are other reasons to suggest that the Ukrainian government may be concealing important facts concerning the crash.

"Dutch investigators asked Ukraine for data from its flight control radars, but Kiev has not provided any information. There is a reasonable question: what are Ukrainian intelligence agencies, the military and the government hiding? What do they fear? For several weeks, investigators could not get access to the crash site because the Ukrainian military was shelling any vehicles moving to the area. I guess the answer is clear," Kornilov concluded.

© Sputnik / Mikhail Voskresenskiy
Dutch Activists Ask Trump to Launch New MH17 Crash Probe
The Dutch-led Joint Investigation Team (JIT) tasked with probing the crash announced in September that the MH17 airliner was allegedly downed by a Buk missile system, which was brought from Russia and consequently returned there. However, Russia's Almaz-Antey defense company, which produces the missile system, rejected the findings in the probe, saying that three simulations showed that the missile was launched from an area controlled by Ukraine's army at the time of the downing.