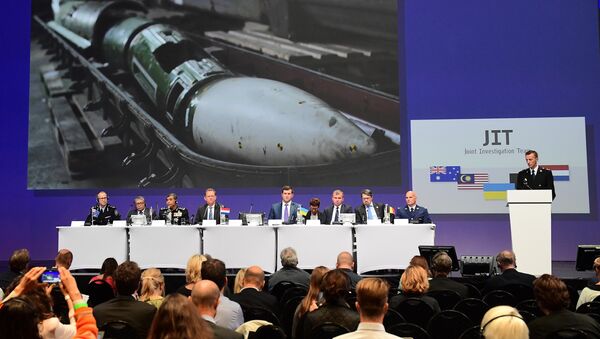 Dutch prosecutors working as part of the international probe into the MH17 crash in Eastern Ukraine have recently announced that they’re unable to decode radar images provided by Russia, raising concerns over the whole investigative effort spearheaded by the Joint Investigation Team (JIT).

Dutch Prosecutors to Send New Request to Russia for MH17 Radar Data
At the same time, the JIT continues to insist that the Malaysian Airlines Boeing was shot down by a Buk surface-to-air-missile launched from the territory controlled by forces of the self-proclaimed Donetsk People’s Republic (DPR).

However, it appears that in its apparent pursuit of justice the JIT tends to overlook or outright ignore evidence provided by Russia that undermines its claims.

Dr Laszlo Maracz, an assistant professor of European Studies at the University of Amsterdam, told Radio Sputnik that the investigation team announcing their inability to decode the radar data provided by Russia months after Moscow provided the information does appear odd, to put it mildly.

According to Maracz, this delay is related to the “one-sided thesis that has been put forward by the Joint Investigation Team from the beginning” about DPR militia allegedly downing the ill-fated airliner.

Furthermore, he added, there appears to be, at the very least, some truth to the accusations of the JIT probe being one-sided and biased as the investigation team actually includes Ukraine – one of the parties that may be responsible for MH17 crash.

"And a number of issues are left open, like the question of why the airspace above the military conflict area was not closed when MH17 started its tragic flight from Amsterdam. There are methodological problems: a lot of research has been based on information gathered from the Internet. Well, you have to be careful with the Internet because uploaded material doesn’t tell you precisely when images and recorded voices were actually made, so there’s only a range of possibilities you can research. And the field work has been defective – I mean, every day journalists are finding human remains which is unbelievable and scandalous in fact," Maracz said.

He also remarked that it appears that the JIT probe is being deliberately stalled by the very people responsible for conducting it.

Maracz’s concerns were echoed by Dutch journalist Joost Niemoller, the author of the book called 'MH17: The Cover-Up Deal'. He told Sputnik that the radar data provided by Russia is extremely important for the investigation, considering the fact that while the Dutch authorities claim that Flight MH17 was downed by a Buk surface-to-air missile fired from the area controlled by DPR militia, all of the so-called ‘evidence’ is data supplied by Ukrainian intelligence service and photos published on social media (which also may originate from Ukrainian intelligence), thus casting doubt on their veracity.

"We need more data. And now we get the Russian radar data where no Buk missile is seen. I consulted technical experts on this matter, and they assured me that if a Buk missile was involved on the incident, it would’ve been displayed on the Russian radar display at least three times. Therefore I’m really surprised by the fact that the Dutch authorities don’t treat this information seriously. They declared that they won’t include it in their research, which leads me to believe that they’re not impartial," he said.

At the same time, Maracz noted, the truth is unlikely to elude the public forever because it is unthinkable that “a plane with a lot of passengers is simply taken down in Europe and we cannot determine who did it and who committed this crime.”

He pointed out that the Dutch public is already calling for an independent, unbiased probe into the MH17 tragedy, and that there’s also one other important factor that works against those who would seek to conceal the truth about the fate of the doomed Malaysian Airlines aircraft.

"When you do a biased research, when you only have one research hypothesis, you’re ready to investigate only one of the possibilities, then every day that the thesis is not proved and you don’t present a ‘smoking gun’, the thesis in itself and the research will become weaker. So it’s also a fight against the time for those who are delaying it. Because if they cannot prove it, the research hypothesis in itself will become weaker, and this will bring us closer to the truth, I think," Maracz surmised.