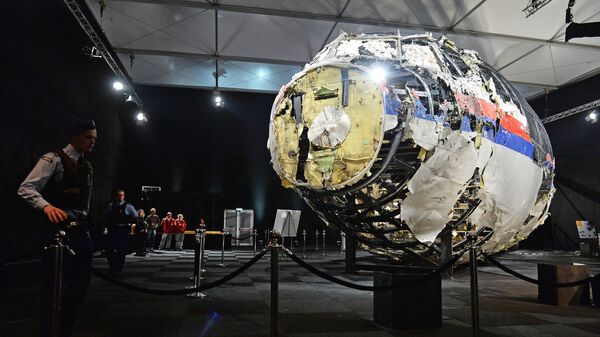 Collecting MH17 Crash Victims' Remains by Dutch Reporter Not Journalism
MOSCOW (Sputnik) — Dutch freelancer journalist Stefan Beck wrote Tuesday in his blog that he thought Amsterdam police's demand to hand over the material that had been collected by Beck and other journalist Michel Spekkers at the site of the MH17 flight crash in Ukraine was a suggestion, not an order.

Spekkers had his luggage confiscated last Saturday upon flying back to Amsterdam after filming the MH17 crash site. He reportedly carried bags full of metal parts and an object that could have been human remains.

"Authorities therefore contacted Michel Spekkers and asked him to hand it over in either the Dutch embassy in Moscow or at Schiphol Airport. During the contact the police made clear they needed the material for investigation. More so, they claimed that the handover would be voluntarily," Beck wrote in his Russia's Invisible Border blog.

World
MH17 Downing Perpetrators May Be Named by Early 2018 - Malaysian Minister
Beck stressed that the two journalists had not tried to hide the material they had brought to the Netherlands from the authorities and that they were mostly worried about the safety of the Donbas residents they had interviewed.

The Joint Investigation Team (JIT), which comprises Australia, the Netherlands, Ukraine, Belgium and Malaysia, tasked with probing the crash said that the MH17 airliner was allegedly downed by a Buk missile system with a missile purportedly launched from the territory controlled by the Donbas militias.