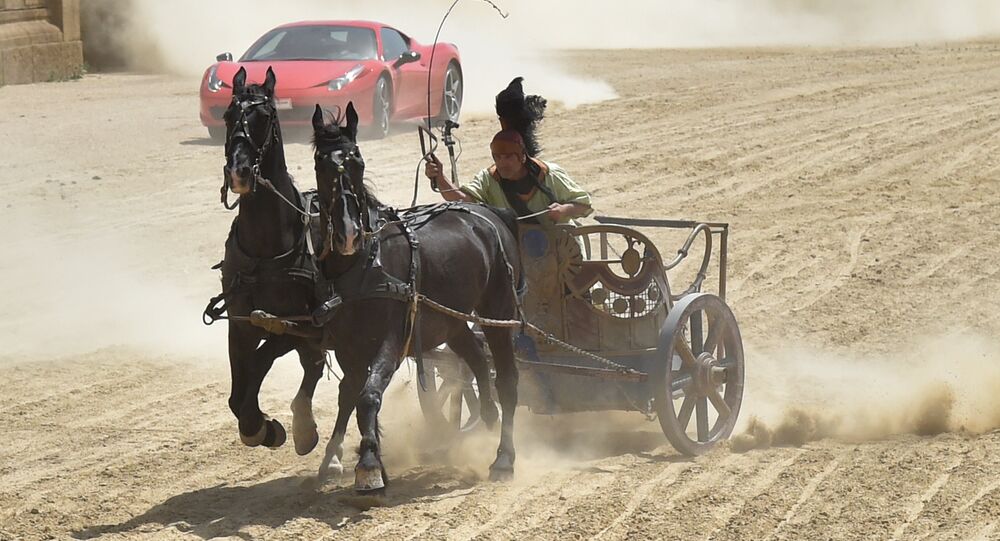 Battle of the Centuries: Ferrari Takes on a Horse-Drawn Roman Chariot (VIDEO)

The film set where a remake of the Hollywood classic Ben-Hur was made in 2016 was the setting for a fascinating battle between different eras. A Roman chariot pulled by two horses took on a Ferrari.

The 1959 film Ben-Hur, starring Charlton Heston as a Jewish charioteer in Roman-ruled Jerusalem, was a Hollywood classic.

The plot of Ben-Hur, which was based on a novel, follows Judah Ben Hur as he takes on Messala, his childhood friend, who has become the commander of the Roman legions in Judea and imprisoned him, his mother and sister.

In 2013 it was confirmed that Russian-Kazakh director Timur Bekmambetov would direct the Ben-Hur remake.

But when the remake, starring British actor Jack Huston in the title role, came out last year it was one of the biggest flops in cinema history. It cost US$100 million to make, but recouped barely US$34 million at the box office. Film reviewers panned it, with Variety describing it as "sludgy and scattershot."

Perhaps the remake should have included a time machine scene where a Ferrari is sent back to the 1st century AD to take on a chariot, because that is exactly what happened Thursday, May 11, and it made for riveting viewing.

The course for the unusual contest was the same one where the chariot race — described as the best part of last year's movie — on the backlot of the Cinecitta studio near Rome.

In 2016 he set a record when he covered a seven mile stretch of twisting road in China — known as the Avenue to Heaven — in just 10 minutes and 31 seconds.

On Thursday, he challenged a charioteer to a race.

But the organizers of the event gave him several handicaps. He was forced to drive an extra lap and stay on the outside of the course, where there was a whole load of extra sand.

He also had to do without electronically assisted steering technology.

Barone, 44, did managed to nudge ahead just before the winning line but he said it was not easy to race on sand.

"When you get to the bend it's very difficult to turn. The main problem was keeping my car straight. From the first lap I no longer had any brakes. Racing against those two horses was truly moving," he said.

"When the horses saw it they thought they were going to be able to head off home and didn't want to make turns anymore," the charioteer added.

Although the film was a big disappointment, the chariot race course is to remain as part of the Cinecitta World amusement park at Castel Romano, south of Rome.

But perhaps in the future the Ferrari 458 Italia will look like a sluggish antique when it takes on Roman Egorov's futuristic vehicle. Last year the student won plaudits for the Ferrari FL he designed for the year 2040.