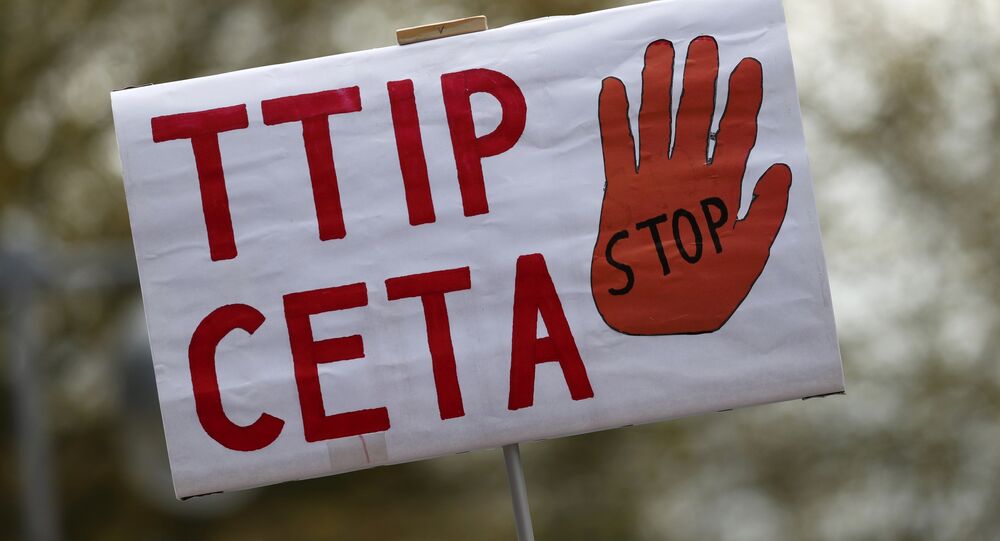 Campaigners fighting against the proposed EU-US trade deal, known as the Transatlantic Trade and Investment Partnership (TTIP) have welcomed a ruling by the European Court of Justice that the EU Commission was wrong to bar them from tabling a proposal against the agreement, Sputnik has been told.

© AFP 2019 /
Proposed US-UK Trade Deal Slammed as 'TTIP On Steroids'
In July 2014, the Stop TTIP campaign group asked the Commission to register the proposed European Citizens' Initiative. Its intention was to "prevent the TTIP and the [Comprehensive Economic and Trade Agreement trade deal between the EU and Canada (CETA)] on account of the fact that the draft agreements contain several critical issues  (procedures  for  the resolution  of  disputes  between  investors  and States, provisions on regulatory cooperation which threaten democracy and the rule of law".

​"Politicians have gone out of their way at every step of the process to prevent a democratic debate of these toxic trade deals from taking place. This ruling has embarrassingly exposed the European Commission's attempts to silence the millions of people across Europe who have called for these deals to be scrapped," Guy Taylor from Global Justice Now told Sputnik.

"The trade deal between the EU and the USA, TTIP, has already been scuppered because of the widespread public opposition, but the trade deal between Canada and the EU, CETA is still awaiting provisional implementation and approval from EU member states. This is a wake-up call for national governments to take their citizens concerns seriously about this corporate power grab when there are considering whether or not to approve this toxic trade deal," said Taylor.

The European Citizens' Initiative was created to give European citizens formal petitioning rights over an often unaccountable decision-making process. Citizens who collect one million petition signatures, passing a threshold in more than seven countries can force the commission to formally respond to their request and hold a public hearing in the European parliament.

Despite the commission's rejection of the formal status of the initiative, campaigners went on to collect over three million signatures across Europe against the trade deals TTIP and CETA. The required threshold of signatures was exceeded in 22 EU countries. Over 500,000 of those signatures were from UK citizens.

"The UK government is currently touting for business all around the world in a bid to boost post-Brexit trade and at the moment neither parliament nor the public have any access as to what these deals might look like. We will be pressuring the government to ensure that there is scrutiny and accountability for this new wave of deals, rather than being disreputably stitched up behind closed doors," Taylor told Sputnik.